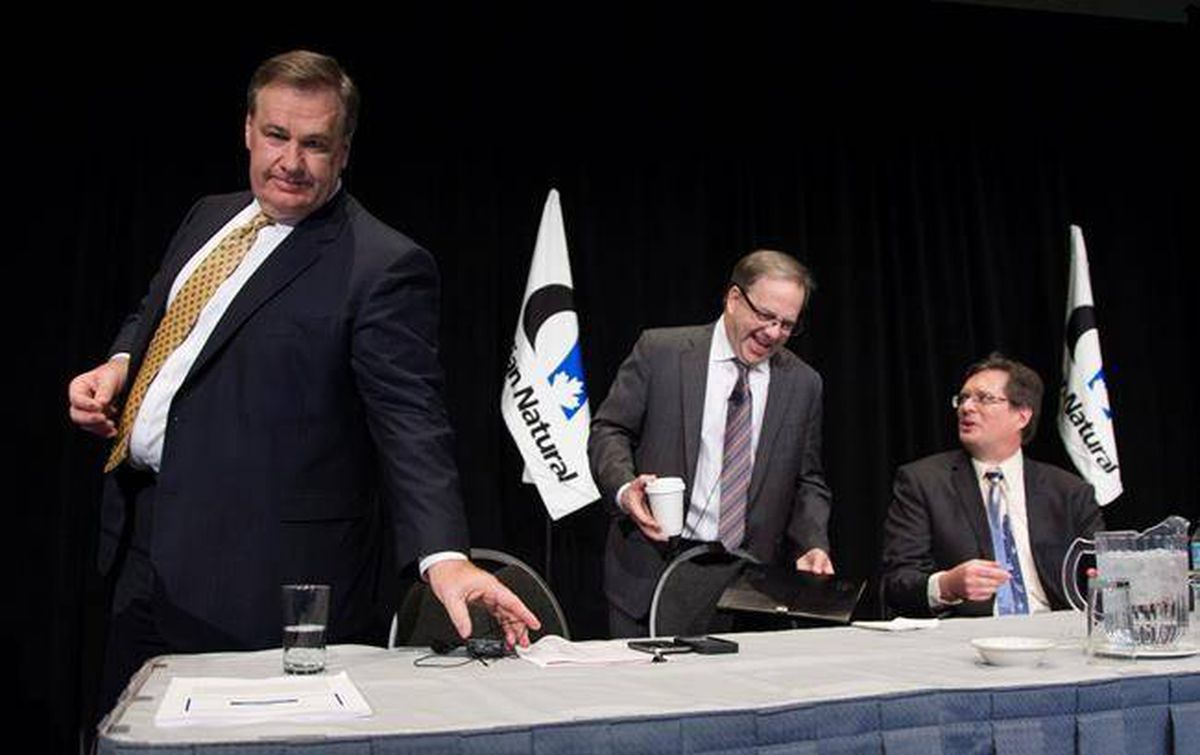 Oilsands giant Canadian Natural Resources Ltd. says it is moving up planned maintenance shutdowns at its heavy oil projects in northern Alberta and will slow down production from new wells to avoid selling the product at current poor prices.

On a conference call to discuss fourth−quarter earnings that beat analyst expectations, the Calgary−based company said Thursday it plans to drill only 59 net Alberta heavy oil wells in the current quarter, down from 116 drilled in the fourth quarter.

"We continue to review our capital program in the context of the current market and are evaluating reducing our heavy oil drilling program for the second half of 2018 and substituting a light oil program instead, if it makes sense," said president Tim McKay on a call with analysts.

The wider difference between Western Canadian Select bitumen blend and New York−traded West Texas Intermediate crude is blamed on export pipeline capacity shortages. The differential closed at US$23.42 per barrel on Wednesday but has been over US$30 in recent months.

McKay said he thinks the discount will return to its typical level of about US$15 per barrel. That would account for shipping costs and the lower quality of WCS versus WTI, as crude−by−rail shipments increase and capacity returns to normal on the Keystone pipeline across the U.S., which has faced pressure limits since it leaked in November in South Dakota.

He said another positive factor for Alberta bitumen prices will be full operation of the new Sturgeon Refinery near Edmonton, expected to begin turning 80,000 barrels per day of bitumen into diesel and other products in the next few months. Canadian Natural owns 50 per cent of the project.

The earnings call was the first for McKay as he takes over as president from Steve Laut, who is now the executive vice−chairman under a succession plan announced in December. Billionaire Murray Edwards remains the executive chairman.

Canadian Natural production averaged a record 1.02 million barrels of oil equivalent per day in the fourth quarter, a 19 per cent increase from the year−earlier period, as it ramped up the latest expansion of its Horizon oilsands mining and upgrading project.

It also counted 180,000 barrels of upgraded oil per day from the oilsands operations it bought for about $11.1 billion in cash and shares from Royal Dutch Shell last spring. It reported heavy oil production from its Pelican Lake operations rose 38 per cent thanks mainly to its $975−million deal to buy assets there from Cenovus Energy Inc. last fall.

Canadian Natural said it decided in the fourth quarter to suspend wells producing 24 million cubic feet per day of natural gas because of low prices.

Laut said the company will support TransCanada Corp.’s planned expansions of its Alberta and B.C. gas gathering pipeline system in hopes that better market access will lead to higher prices.

Adjusted earnings from operations were up, however, rising to $565 million from $439 million a year earlier.

And they need KXL, Line 3 and

And they need KXL, Line 3 and TM for WHAT?

The more production is slowed

The more production is slowed, the less likely that the resources will be needed. Great for the environment - let the industry spiral down.

I quote: “The wider

I quote: “The wider difference between Western Canadian Select bitumen blend and New York−traded West Texas Intermediate crude is blamed on export pipeline capacity shortages. “ would someone please explan why rhe price goes down when there is a shortage of supply; this is contrary to my understanding of economics.

Murry Edwards Mt Polly. Left BC. With the Clean Up Cost. of The Ecocide .

That is Ongoing to This Day. Glad to see the oil industry Hemorrhage
Nobody wants it even At Tidewater. More Wet Dreams of Harpers Petrostate