Shot in the face for looking Muslim, Rais Bhuiyan explains why he tried to save his attacker's life 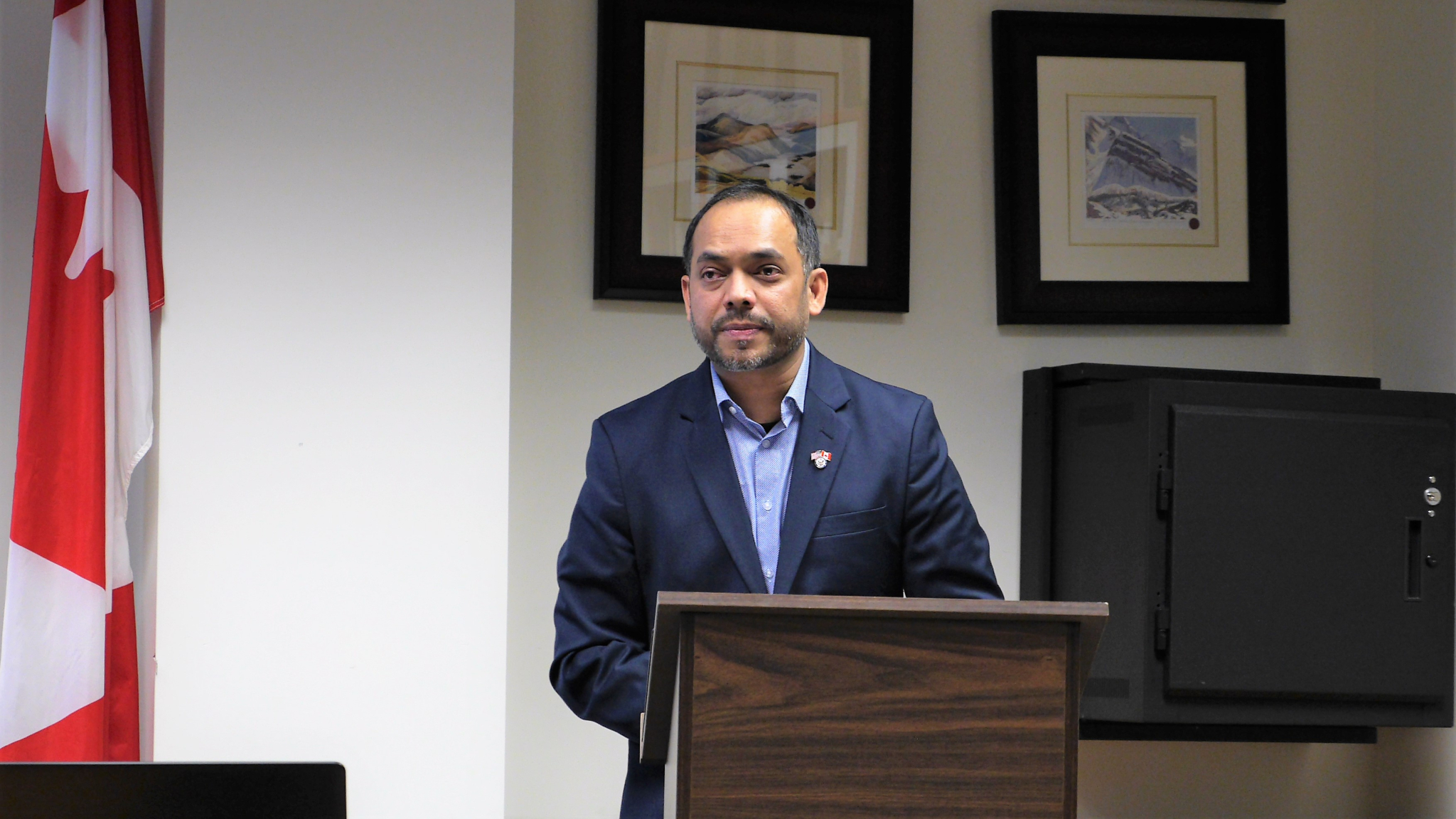 Rais Bhuiyan, a human rights activist, speaks at an event at Concordia University in Montreal on Feb. 29, 2018. Photo by Clothilde Goujard
Previous story
Next story

Ten days after the September 11, 2001 attacks in the United States, Rais Bhuiyan was shot in the face.

His attacker, Mark Stroman, shot and killed two other men. He later told the police he wanted to avenge the deaths of victims of 9/11 and had shot his victims because they looked like people of “Muslim descent.”

Bhuiyan survived and forgave his attacker. Stroman had been found guilty and was on death row in Texas. Bhuiyan launched a major campaign with Amnesty International to plead for his clemency.

Stroman was still executed in 2011 but Bhuiyan continued to campaign to raise awareness about the dangers of hatred and the need for compassion through a non profit organization that he created called World Without Hate.

He has brought this message to Canada this week, speaking in Montreal on Wednesday about what he describes as a pressing need to fight the hatred that is following the global rise of populism.

“Six years after Mark's death, hate still consumes our communities and our nations,” he said to an audience at Concordia University. “Moving from fear and ignorance to empathy and compassion will help us to build bridges... and destroy the stereotypes of the so-called other.”

The event was organized by the Montreal Institute of Genocide and Human Rights Studies and the U.S. Consulate General in Montreal. The Institute is a research organization based at Concordia.

Bhuiyan has also stopped in Halifax as part of the same speaking tour, set up by U.S. officials. He'll also be speaking at schools in Quebec City and at the Quebec City mosque that was struck by tragedy in January 2017 when a mass shooter opened fire and killed six men who were there for Sunday evening prayers.

“Who expects this kind of rhetoric in 2018? We don't live in the 1930s and 40s anymore,” @Rais4peace - an American human rights activist, told @clogouj - in response to a question about political leaders who spread fear and hate.

THAT was an inspiring lunch with @Rais4peace of @WWHforgive! His story of forgiving the man who shot him in the face and then starting a movement of forgiveness, tolerance, & acceptance is one that everyone should hear. Hear his story 7pm tonight at Keshen Goodman Library. pic.twitter.com/jpqwBLujY8

The Consulate in Montreal says that its network of diplomatic missions are regularly organizing trips to bring Americans to Canada to share their inspiring lives and experiences.

“One of the most important ways the U.S. Embassy and consulates help reinforce the already tight relationship between Canada and the United States is through people-to-people conversations on issues crucial to all of us,” said Joan Sinclair, public affairs officer of U.S. Consulate in Montreal in an email. “When we heard Rais' story of forgiveness, empathy, and acceptance, we knew his message would resonate with Canadian audiences. Each of our countries has deep expertise in countering hate and extremism, but Rais' exceptional approach adds a new dimension to the conversation."

Kyle Matthews, director of the Montreal Institute of Genocide and Human Rights Studies, insisted on the need to have discussions about the rise of hatred at the moment.

“We're seeing increasing terrorist attacks in many parts of the world and we're seeing a rise of citizens who are angry and want to blame people that have nothing to do with it,” he said to National Observer. “Our world, I'm afraid, has become more fractured by religion, by hate, by extremism.”

'My American dream turned into a nightmare'

A former pilot in Bangladesh, Bhuiyan immigrated to the U.S. in 1999 to study computer science. He was shot in 2001 and lost eyesight in one eye.

But his experience inspired him to become a human rights activist who would fight for his attacker's life.

“My American dream turned into a nightmare,” he said. “But giving up was not an option for me.”

Stroman, his attacker, eventually contacted him from prison and thanked him for his compassion.

“You have forgiven the unforgivable,” Stroman said in a video filmed in prison.

Bhuiyan’s story was told by New York Times journalist Anand Giridharadas in a book called “The True American: Murder & Mercy in Texas.” The story is also making its way onto the sliver screen in a movie adaptation by director Kathryn Bigelow.

Seventeen years after 9/11 and Bhuiyan’s attack, the United States has a president who shares hateful messages on his Twitter account. The president has also introduced a ban on countries and putting into place immigration policies including a travel ban in America on people from countries with a Muslim majority population.

While Bhuiyan didn’t address these issues specifically, he had a warning about the rise of hate and false information online. He encouraged people to show empathy for refugees and sexual, ethnic and racial minorities.

“I've traveled to many cities and small towns facing many challenges, meeting many people who are struggling to make ends meet, living in fear of the other and looking for change,” he said to the audience. “I understand their pain, suffering and anxiety but the other is not the enemy. Hate, ignorance and those who (spread them) in the name of security and prosperity are the enemy.”

The rise of hatred is a global phenomenon that has him concerned.

“Who expects this kind of rhetoric in 2018? We don't live in the 1930s and 40s anymore,” he said in response to a question about Trump, with a U.S. consular official listening nearby. “People are getting more advanced in every aspect of life but then what is pulling us back again to have these kinds of leaders full of fears and who are dividing the general population to proceed with their personal agenda?”

However, he said that rising intolerance is also driving more activism that aims to stop it.

“Lots of good people are rising and dedicating their time and forces to combating hatred and intolerance," he said. "So those people give me hope and this hope is much stronger and powerful than the fear that I see with the rise of these neo-Nazis and extreme right groups."