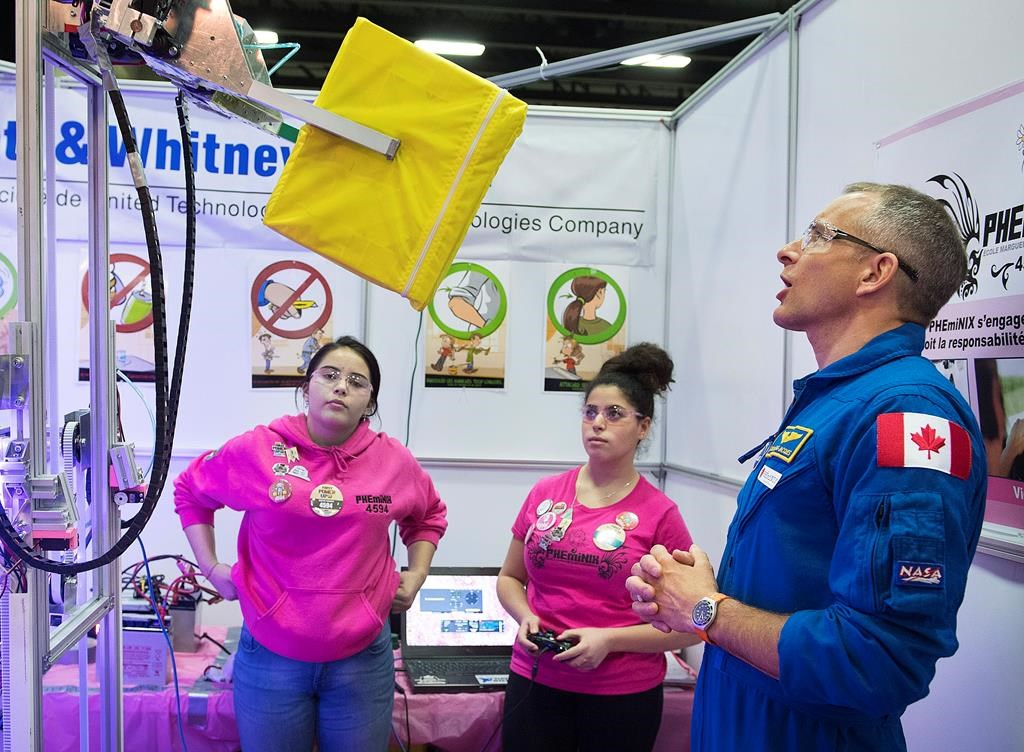 Astronaut David Saint-Jacques looks on as participants give a demonstration of their robot's skills during the FIRST Quebec robotics competition in Montreal, on Saturday, March 3, 2018. Photo by The Canadian Press/Graham Hughes
Previous story
Next story

David Saint-Jacques is two-thirds of the way through his training ahead of his flight to the International Space Station in November, the Canadian astronaut said Saturday.

Saint-Jacques, who took a break from his training to cheer on the participants of a youth robotics competition in Montreal on Saturday, said he's finished the theoretical part of his training, and is currently working on simulators and practising the science experiments he'll do in space.

"I'm in the very practical part of my training, where we're learning to react to every emergency situation available," he said in a brief interview.

"It's a bit like the launch ramp is at the summit of Mount Everest, and I'm at about the two-thirds mark of climbing Everest."

The 47-year-old will be the first Canadian aboard the ISS since Chris Hadfield spent five months aboard the station in 2013.

By the time he leaves Earth, the Quebecer will have undergone intense training, including time in the microgravity simulator.

On Saturday, Saint-Jacques, who is both an engineer and a doctor, appeared eager to check out the talents of the next generation.

He spent time touring and chatting with the mostly teen-aged participants and took in the competition, where student-designed robots raced to pick up and place bright yellow cubes as rock music blared.

Nouha Doghri, 16, said she was impressed and touched by Saint-Jacques' interest in their project.

"He's really inspiring as a person, having done all those jobs: pilot, astronaut, astrophysicist," said Doghri, part of an all-girls team.

"It's really impressive and motivating because it shows that if you want something you can do it."

Saint-Jacques told reporters that robotics are Canada's main contribution to space flight and he's happy to see that innovation continue in the next generation.

He said there's always a chance one of the students could design the next Canadarm — the country's famous now-retired robotic contribution to space flight — but even if they don't, they're still learning.

"They're learning to be ingenious, thinking outside the box, fixing, focus on the solution, not the problem — all these skills that will be invaluable later in life," he said.

He compared the students' hard work to his own preparation to go to space, adding that for the moment, he was more focused than excited.

"(They students) were eager to get ready for the big day, and that's the shoes I'm in," he said.