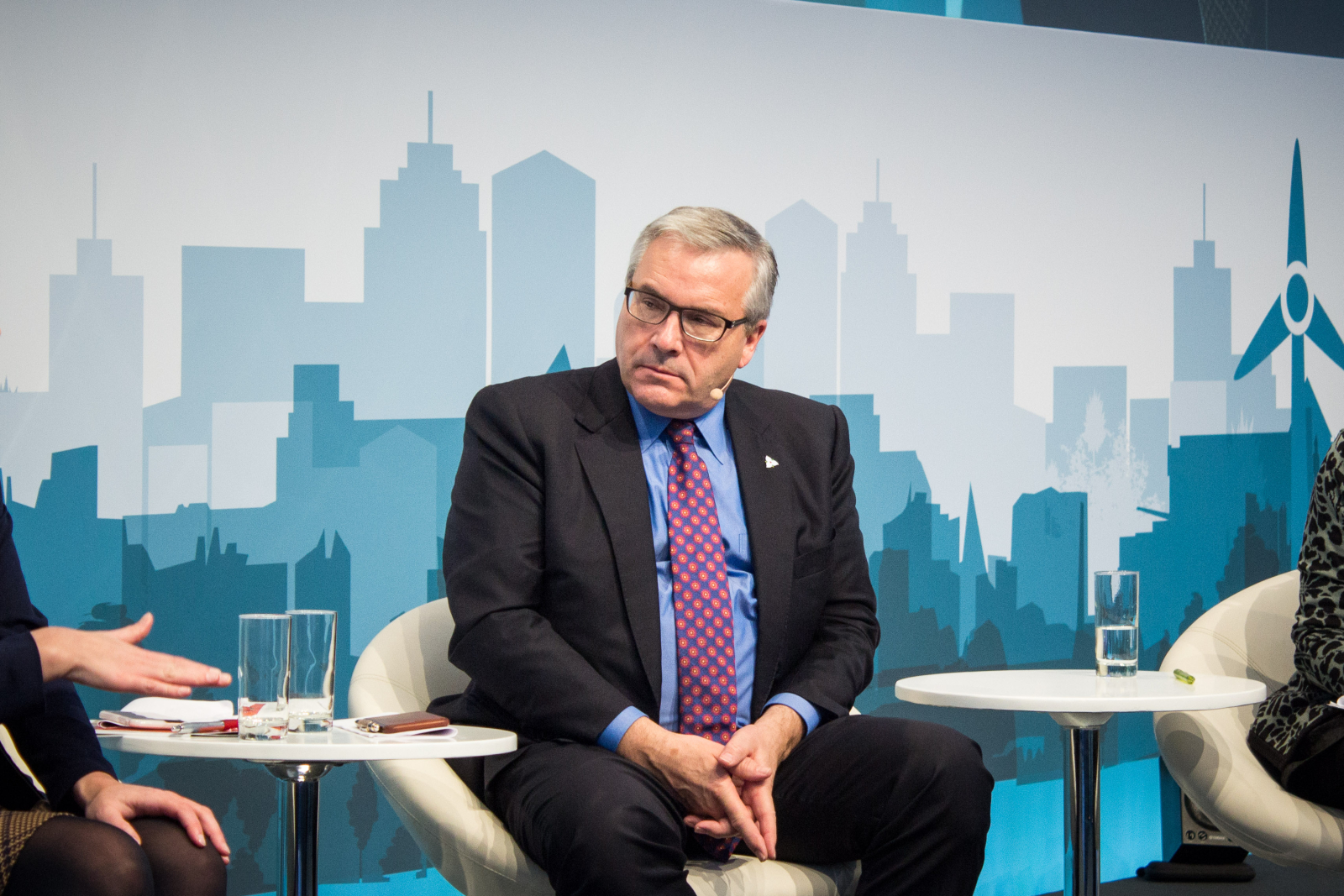 Ontario Environment and Climate Change Minister Chris Ballard speaks on a panel at a climate conference in Bonn, Germany on Nov. 16, 2017. Photo by Mike De Souza

Ontario’s environment minister says statements made by contenders in the provincial Progressive Conservative Party leadership race have made him concerned for his children’s future.

Chris Ballard took the opportunity during a speech to the Empire Club of Canada in Toronto to lash out at the candidates, who have all expressed skepticism of provincial green policies, and compared the unusual weather in the Arctic and in Europe to the Netflix show Stranger Things.

“I know as minister I really try to remain neutral, and not get drawn into politics, partisan politics, a bit, but I have kids, and I am worried,” Ontario's environment and climate change minister told the crowd of businesspeople on March 5.

“I’m worried that when I look across the aisle, I see and I hear about PC (party) candidates, who seem to still be debating whether or not climate change is a real thing — in 2018.”

Ballard said he was worried “at a time when the Arctic was two degrees above zero in February; at a time where, in Toronto, we’re wandering around without jackets, and in Europe, they’re being hammered by 10 centimetres of snow.”

“It’s like the next season of Netflix’s Stranger Things,” he added. “If you’re familiar with that show, you’ll get what I’m talking about.”

The party has extended its voting deadline to noon March 9 for members to pick between one of those four candidates. The winner will succeed Patrick Brown, who resigned from his post in January amid sexual misconduct allegations he denies, before launching a 10-day comeback candidacy that he ended late last month.

Ontario's carbon auctions have made $2.3 billion

In his speech, Ballard defended Ontario’s carbon market, which operates under a cap-and-trade system. Ontario recently joined the Quebec-California carbon market and raised $471-million in an auction of carbon allowances last month.

“I’m worried that when I look across the aisle, I see and I hear about PC (party) candidates, who seem to still be debating whether or not climate change is a real thing — in 2018" says @chrisballardmpp #onpoli #cdnpoli #climatechange

Ballard said to date, the province has held five carbon market auctions, generating about $2.3 billion in proceeds. “Let me remind you, we are required by law to spend every penny of those proceeds on things that reduce greenhouse gas pollution or prevent it,” he said.

Ontario’s plan puts a cap on the amount of carbon pollution that can be released by factories, plants and other large emitters. When they go over the amount, they have to buy carbon allowances, either from an auction or from other companies that come in under the limit. The cap is steadily reduced every year, meaning less pollution is allowed overall.

Ballard admitted “it’s not an easy concept to explain.”

“It doesn’t lend itself to a five-second TV clip. I get it,” he said. “But we chose this plan because it guarantees reductions every year, as the cap on pollution is reduced, and it delivers those reductions at the lowest cost for families and businesses.”

He said one of the main goals was to get Ontario off its “imported fossil fuel dependency.” Between 2014 and 2016, said Ballard, Ontario imported “virtually all of its fossil fuels,” to the tune of $58 billion.

The federal government’s carbon pricing regime provides for minimum standards, and imposes a federal system on provinces that don't have their own such systems in place, or don't meet the standards. Ontario’s current cap-and-trade system will be permitted under the federal rules.

Under Brown’s leadership, the PC Party’s 2018 election platform had said the party would scrap the cap-and-trade system but "opt in" to the federal carbon price backstop. Ford, for one, has said he’ll take Ottawa to court to fight Ottawa on carbon pricing.

Ballard was at the Empire Club to announce the “GreenON challenge,” which he said will take up to $300 million from the Green Ontario Fund and invest in low-carbon projects promoting initiatives like energy efficiency in homes.

“In Ontario, we’re seeing an increase in flooding, more intense storms, shorter winter road seasons, the proliferation of devastating invasive species, and an increase in vector-borne diseases,” he said.

“I don’t think I’m alone in believing that climate change is the greatest single threat to our security and our future prosperity.”