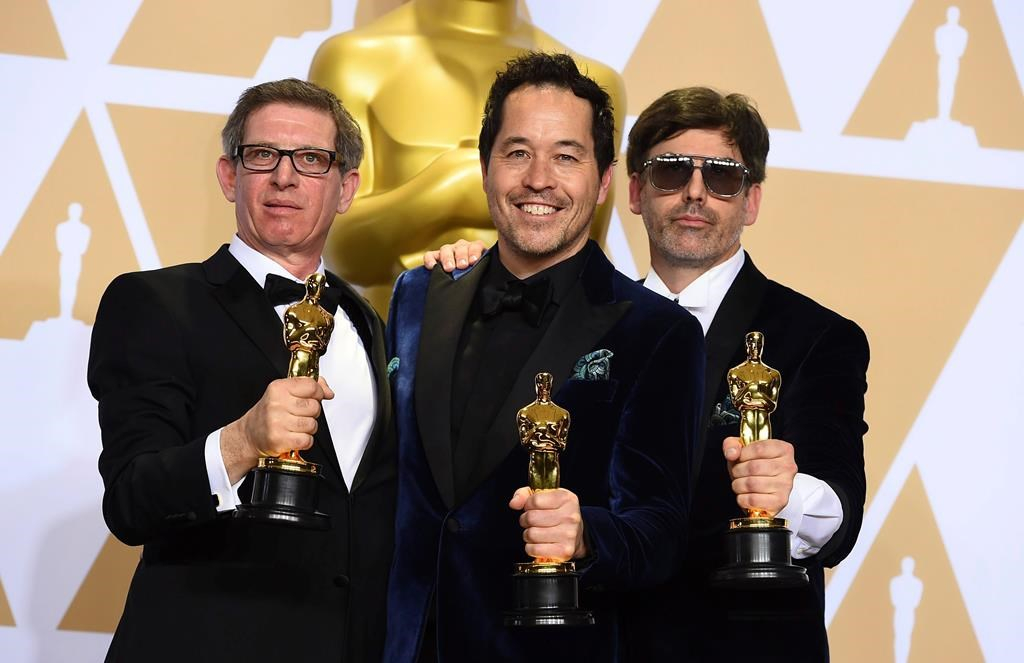 Jeffrey A Melvin, Paul D. Austerberry, and Shane Vieau, winners of the award for best production design for "The Shape of Water", pose in the press room at the Oscars on March 4, 2018, at the Dolby Theatre in Los Angeles. Photo by the Associated Press
Previous story
Next story

"The Shape of Water"'s Oscar wins on Sunday for best picture and best production design reflect Toronto's growth into a film and TV production powerhouse, said the Canadian talent behind the movie who went home with golden statuettes.

Toronto producer J. Miles Dale, who shared the best picture Oscar with director Guillermo del Toro, called the achievement "a watershed moment" for Toronto and the Canadian film industry at large. The film was shot in Toronto and Hamilton and besides del Toro and the movie's cinematographer, most of the crew members were Canadian.

"So we were committed to using those people all across the board on the film and we think it's a great moment for Canadian filmmaking."

It was Dale's first Oscar win but he didn't get much time at the microphone. It appeared the broadcast would end before he had a chance to speak, but he was saved by host Jimmy Kimmel, who went up to Dale and asked: "What did you want to say? I'll tell them."

Dale was able to briefly salute del Toro's work on the film, saying: "this is his heart and it's everything."

Earlier in the show, Canadians Paul Austerberry, Jeffrey A. Melvin and Shane Vieau shared the best production design trophy for crafting the look of the Cold War-era merman romance, which stars Sally Hawkins as a mute janitor who falls for a captive and abused amphibian creature, played by Doug Jones. The film also won the best director and original score Oscars.

Speaking to reporters backstage, Vieau noted that Toronto's screen community had a huge year not only with the leading 13 Oscar nominations for "The Shape of Water," but also the accolades for TV's "The Handmaid's Tale," which was shot in the city.

"Toronto (was) above and beyond with everyone in North America with 'Handmaid's Tale' and 'Shape of Water,' we really came out on top," Vieau said. "It's a really big thing."

"It started with 'Good Will Hunting,' 'Chicago,' now us.... We want to keep it that way and keep going."

As they accepted their trophies onstage, the trio thanked their colleagues watching back home in Toronto.

"Thanks to all the Canadian crew who are partying right now at the Palais Royale in Toronto — this is for you," said Austerberry, who was born in Toronto and grew up in Sault Ste. Marie, Ont.

"Thank you to the academy. Guillermo — may you keep dreaming up your monsters and their wonderful stories so people like us can help shape their worlds."

It was the first Oscar nomination for the trio, who also won in the same category at the recent British Academy Film Awards.

Meanwhile, the winners of the best visual effects award for working on Quebec director Denis Villeneuve's "Blade Runner 2049" thanked their "friends in Montreal," saying: "Merci beaucoup, this is for you."

"Thank you to Denis Villeneuve, whose guts are seen in every frame of this film, especially the visual effects," said John Nelson, who won alongside Gerd Nefzer, Paul Lambert and Richard R. Hoover.

Villeneuve also got a shout-out onstage from Roger Deakins as he accepted the Oscar for best cinematography on "Blade Runner 2049."

Kimmel mentioned another Canadian nominee in his opening segment — "the magnificent Christopher Plummer" — who got a nod for his supporting role in "All the Money in the World."

Kimmel made a couple of jokes about the 88-year-old Toronto native's age, including a reference to the hit Broadway play "Hamilton," about one of the founding fathers of the United States.

"How does ('Hamilton' creator and star) Lin-Manuel Miranda compare to the real Alexander Hamilton?" Kimmel teased Plummer from the stage.

Canadians get Oscar nods for Ontario-shot 'Shape of Water'

At the Oscars of anti-corruption, badass women lead the way