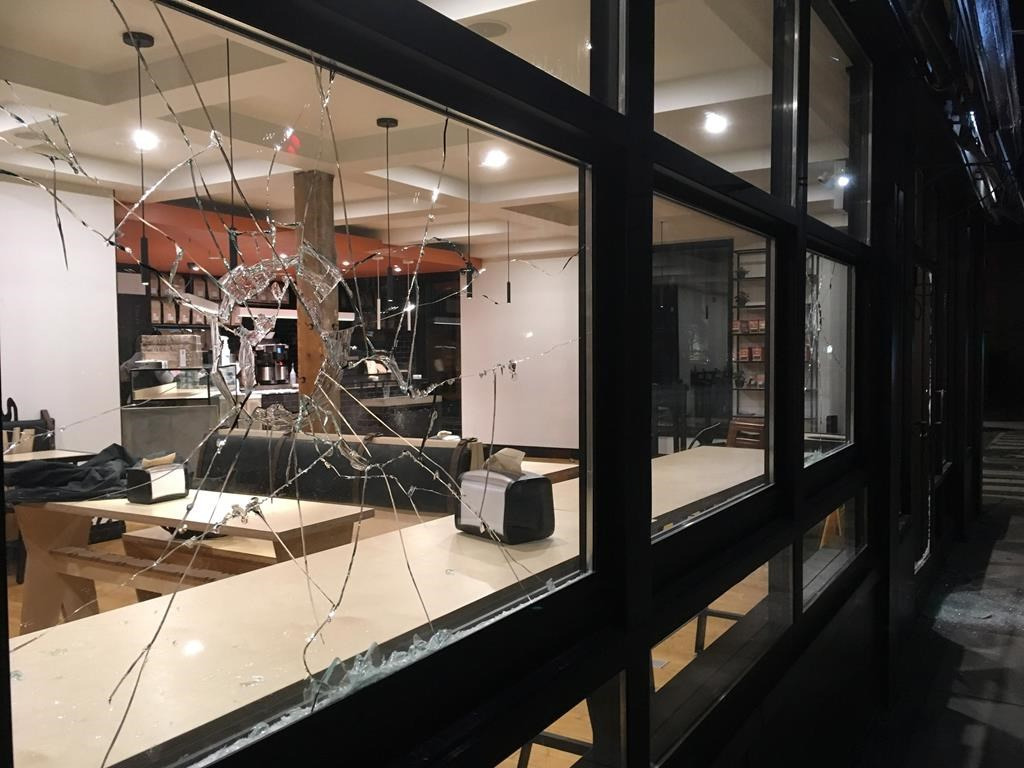 A broken window is seen at Donut Monster, in Hamilton, Ont., on Saturday, March 3, 2018. Handout photo by Reuben Vanderkwaak
Previous story
Next story

A band of masked vandals describing themselves as "ungovernables" roamed through a stretch of an Ontario city hurling rocks at small businesses and causing up to $100,000 in damage, local police said Sunday.

Cafes, stores and vehicles along a roughly one-kilometre stretch of road in Hamilton took the brunt of the damage as between 20 and 30 people marched along the route on Saturday night.

City police Insp. Paul Hamilton said the group, clad in black, sporting masks and carrying a banner saying "we are the ungovernables," mobilized at a local park before taking to the streets shortly before 10:00 p.m.

Police were called to the park after reports that people were spray-painting messages in the area, he said, adding some officers witnessed as the situation quickly escalated.

"As they went along the street, they damaged some vehicles that were parked on the street, threw some rocks at some homes, set off some fireworks," he said in a telephone interview. "Then they got onto Locke Street ... which is heavily populated by restaurants and cafes, and threw rocks through windows of a number of the businesses there."

Patrons hid under tables as they listened to glass shattering and bangs echoing through the neighbourhood.

Although no one was injured, Hamilton said police have so far received about 10 reports of mischief and estimate total damages of about $100,000 so far.

Greco said that can take a significant toll on the sorts of independent operations involved in Saturday's vandalism.

"Insurance covers a certain amount. It puts a big dent in a small business," he said.

"It's a hard thing that happened."

The vandalism came as a particular shock to local coffee and donut outfit Donut Monster, which just opened its doors as a retailer about two months ago after extensive renovations.

Owner Reuben Vanderkwaak said he arrived at the shop late Saturday night to find at least half the newly installed windows shattered inside the shop and what appeared to be landscaping stones lying nearby.

He said several other storefronts in the area appear to have been similarly hard-hit.

But Donut Monster was open for business again Sunday morning, and Vanderkwaak said community members appeared eager to show support and move on from the vandalism.

Encouragement came from the political realm too, as NDP leader Andrea Horwath, who represents the riding where the vandalism took place, tried to urge residents to get back out and patronize the damaged shops.

"Let's come together to greet each other as neighbours, shop local on Locke, and show these vandals that this attack will only make us stronger," she tweeted.

Vanderkwaak said his shop doors are open to all, including the alleged perpetrators, adding that understanding the mob's motives for their destructive march could be helpful in preventing similar events in the future.

"Violent actions don't communicate very well," he said. "I wanted an opportunity for people to come together and actually communicate in a peaceful way and ... try to bring some reconciliation to whatever issues are at hand."

Neighbourhood resident Brianna Baraniecki, who witnessed 10 to 15 police cars converging on Locke Street towards the end of the march, shares the desire to understand what motivated the participants.

She said a wish to treat the incident as a one-off is tempered by concern that the unknown group may plan further action.

"I guess I'm just standing here kind of waiting to see what's going to happen next," she said. "I don't really know if I believe that this was a truly isolated event or if they have intention, whoever they are, of continuing to do this. I guess I'm just a bit apprehensive."

Hamilton said police have made no arrests in the case so far, adding the arrival of nearly 30 police officers on the scene sent marchers scattering, shedding stray items of clothing along the way.

He said police did not know details about the makeup of the group, including the ages or genders of its members.

He said police are combing through evidence from the scene as well as surveillance footage from local businesses, but urged anyone else with information to come forward.