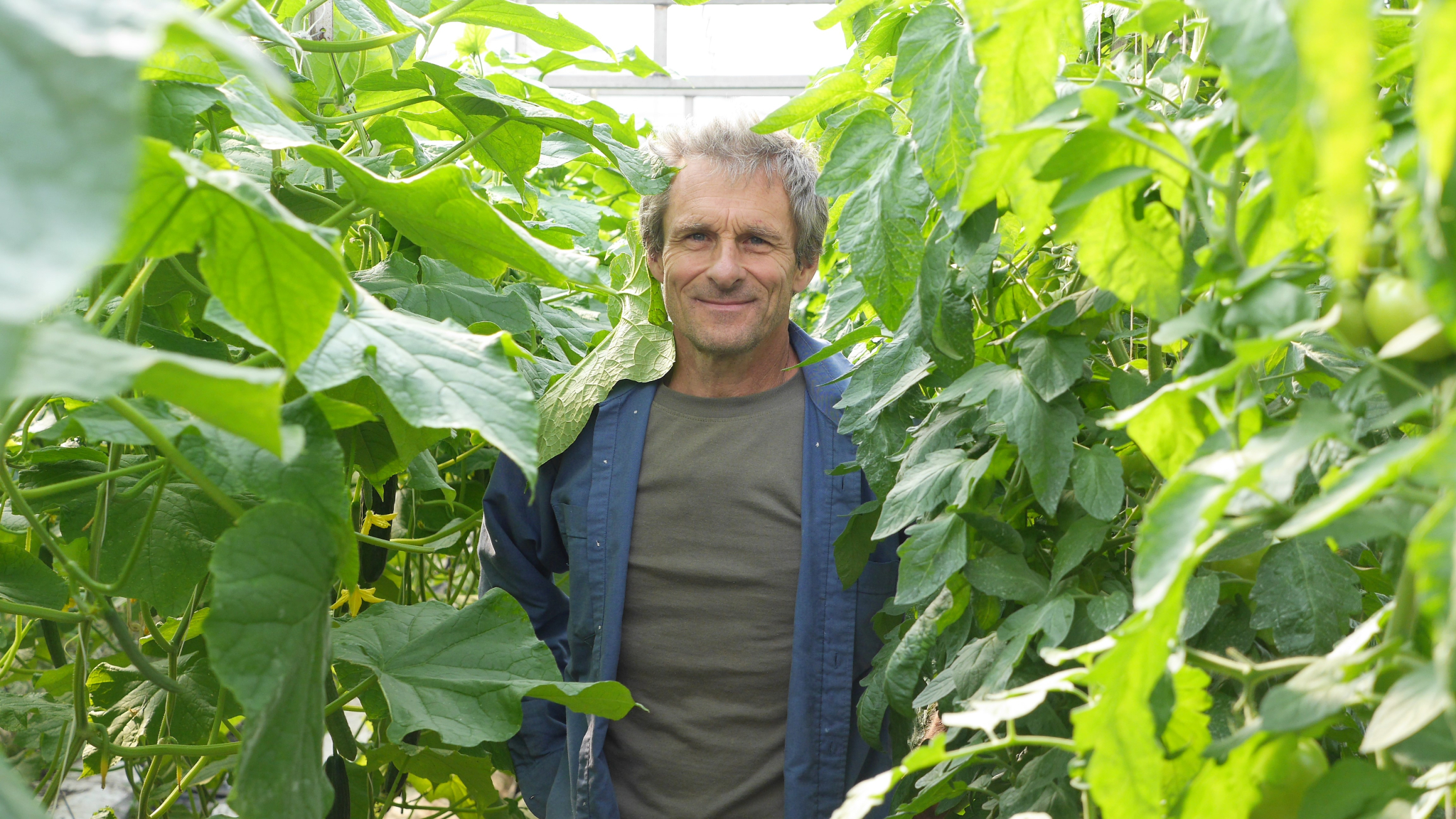 Jean Gosselin, an organic farmer in Lévis, Que., poses in his crops on Sept. 28, 2017. Photo by Clothilde Goujard
Previous story
Next story

Jean Gosselin has been fighting pipelines for 15 years. The farmer who grows organic products in Lévis, a city on the shore of the St. Lawrence next to Quebec City, has become well acquainted with the National Energy Board, pipeline companies and their consultants.

In 2005, Gosselin was told a pipeline could potentially cross his land of 10 hectares. The Rabaska project was supposed to create a methane terminal in Lévis and build a 42-kilometre pipeline to link the terminal with other pipelines. The project was cancelled in 2013.

In the same year, the Valéro Pipeline Saint-Laurent, which also crosses Gosselin’s land, was announced. This 250-kilometre pipeline, which links a refinery in Lévis to Eastern Montreal, was successfully built and has been operational since 2012.

By the time a third pipeline, Energy East, began to be discussed in the region, Gosselin had gotten to know the system fairly well. Although Energy East would have been laid a kilometre south of his land, Gosselin still decided to help other landowners by representing them through the association.

“It’s not just necessarily about fighting but trying to represent people to try to get the best — or at least, the least worst — agreement for when the curtains are drawn,” he told National Observer in an interview on Feb. 23, 2018.

The Trudeau government has introduced legislation to overhaul the current environmental system by replacing the Canadian Environmental Assessment Agency and the NEB. Gosselin said he has been examining the bill's potential consequences for landowners.

He said there are “very interesting leads” in the current bill's text for landowners, such as Ottawa's addition of details to a section describing a pipeline company's expropriation powers. But he said he is keeping his expectations low so as not to be disappointed.

“We see again, more or less, the expropriation power (from the companies) that stays,” he said.

“Now, there are other aspects where it seems they want to mark — I wouldn’t say frame — the pseudo-negotiation between the companies and the landowners. More criteria are mentioned.”

Gosselin said he used the term “pseudo-negotiation” because he said that with the existing laws, power lies with the companies.

“From the (perspective) of the landowner, someone arrives at your place, puts a revolver on the corner of the table and a cheque of a thousand dollars and you have a choice. You accept to collaborate, or it can end in being expropriated. That’s the alternative you have,” he said.

“The negotiation — there’s not really any.”

Gosselin saw in the new bill's text that pipeline companies still have the possibility to enter private land to carry out preliminary research. If negotiations with landowners fail, the company can ask for an injunction to still access the land.

He said it would be good for a level of government to certify pipeline representatives regularly against certain ethical standards in order to operate. He’s heard stories of elderly landowners being intimidated by energy firms.

“Usually we deal with decent people, but we also hear stories that are not very reassuring,” he said.

Over the years, Gosselin has seen the toll that negotiating with pipeline companies has taken on people he knows.

“For the St-Laurent pipeline, a lot of couples separated, some people were sick, there was a person who never got over it psychologically,” he said.

Gosselin is worried that the proposed text does not protect Quebec’s particular situation.

Agricultural lands in Quebec are treated differently than in the rest of Canada, he said. While most farmers irrigate their lands in the West, Quebec farmers drain their lands. That process can be hindered by pipeline infrastructure, he said.

Quebec regulations require pipelines to be buried at least 1.6 metres deep in agricultural zones, which is deeper than the 1.2 metres required under federal regulations.

“We thought that in this new (legislation), there would be a clause to make sure companies have to respect Quebec laws regarding the protection of agricultural territory,” he said.

“It would be good to have a clause that forces companies to always present their projects to the Commission de Protection du Territoire Agricole du Québec,” the provincial agricultural regulatory body.

He said that in the case of Energy East, the company had been unclear whether it would respect Quebec regulations on the depth of burying, and had submitted documents to the commission, but then withdrew them.

Gosselin and his association are working with the Quebec Environmental Law Centre. He said they are planning on requesting an intervention when the bill appears before committee to secure the protection of landowners in the legislation.

Editor's note: due to an editing error, this article was updated at 11:20 a.m. ET on March 6 for clarity and style.

Gosselin's optimism is to be

Gosselin's optimism is to be admired, and his assistance to other landowners is laudable.
However, any regulator, whether it be the NEB, AER, CER etc., has far too much to lose by assisting landowners in any way. The regulators will always be captured by the industry, who has the most to gain by preventing landowners from gaining any rights against them. The industries have been given immeasurable powers and rights by the acts under which the regulators operate. Landowners have NO rights.

In addition to Gosselin's assistance in Quebec, another Canada-wide organization, CAEPLA, Canadian Association of Energy and Pipeline Landowners http://www.caepla.org/, assists member landowners with various energy infrastructures on or proposed for their property, including electrical transmission and pipelines.

Without the assistance of knowledgeable and experienced landowner advocates, these companies will certainly take advantage of landowners' trust, ignorance, naïveté, and desire to cash in on the companies' offers of money for working on their lands.
Words to the wise - get one of the advocates working for you. Join their group(s), and don't sign ANYTHING without a knowledgeable and INDEPENDENT person having reviewed and approved what you have been asked to sign.

The pipeline companies and their land agents are not landowners' friends. They want something from you, and will do and say anything to get what they want at the cheapest cost possible. They don't care about your land, only their pipeline running through it.

Gosselin is dreaming. No regulator will protect landowners.

It is interesting to also

It is interesting to also note that the planned composition of the "modernized" NEB, the CER, is to have NO landowner representation.

Is this equitable, just or fair? NO. But it's just the way the industry and the government want it.

Agreed - good luck to anyone

Agreed - good luck to anyone who depends on the regulators for help of any kind.