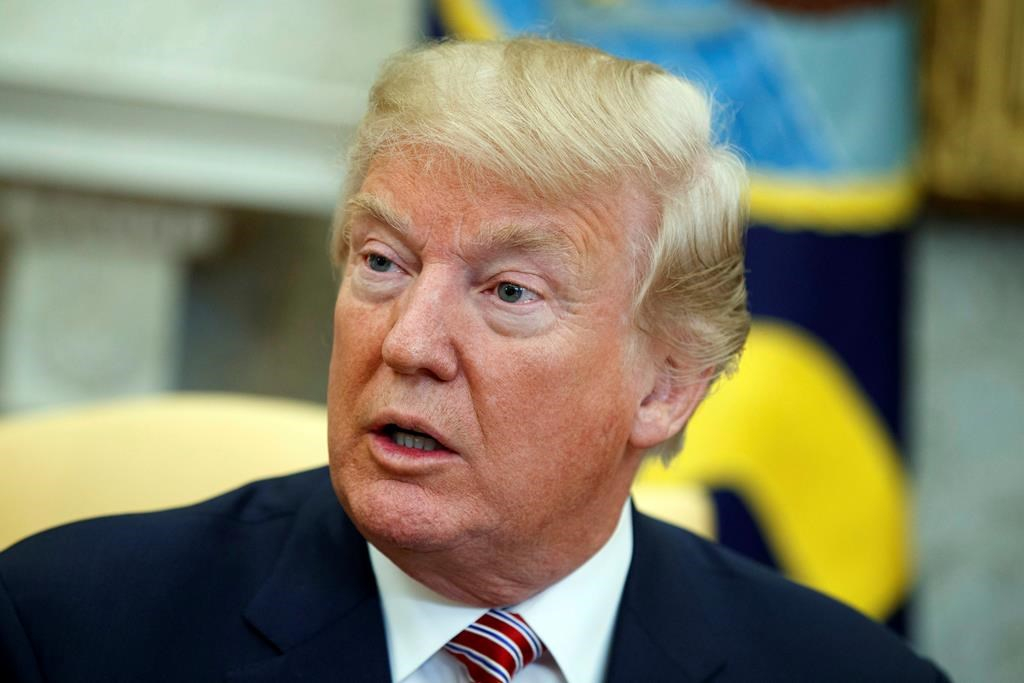 President Donald Trump speaks during a meeting with Shane Bouvet, a campaign volunteer, in the Oval Office of the White House, on Friday, Feb. 9, 2018, in Washington. File photo by The Associated Press/Evan Vucci
Previous story
Next story

If Canadians are hoping to be spared from American tariffs, they may be disappointed.

A White House official told the U.S. Sunday talk shows that President Donald Trump has made up his mind: steel and aluminum tariffs will apply to everyone.

That includes America's No. 1 supplier of both: Canada.

White House trade official Peter Navarro, making the rounds of weekly talk shows, said excluding one country will create a slippery slope — he said tariffs would go up on the remaining countries, and everyone else would demand the same treatment as Canada.

"That's not his decision," said Navarro, when asked on Fox whether Trump would exclude anyone.

"As soon as he starts exempting countries he has to raise tariffs on everybody else. As soon as he exempts one country his phone starts ringing from the heads of state of other countries."

He added more details in an interview with CNN: "Canada's 40 per cent of the (American aluminum) market. If you exempt Canada, then you have to put big, big tariffs on everybody else. So this is a measured, targeted approach."

He was repeatedly pressed on the Canada issue in these interviews.

Show hosts asked him how the White House can possibly justify using a national security excuse for imposing tariffs on a close NATO partner, and legal member of the U.S. military-industrial complex.

To apply these tariffs, the U.S. is invoking a rarely used clause in a 1962 trade law that allows the president to declare tariffs if required by national security. The White House argues that the wording is broad, and that national security also could include employment and economic stability of the domestic steel industry.

Trade wonks within the U.S. fear cascading ripple-effects, with other countries setting retaliatory tariffs and using similar security excuses in a damaging trendline that could rattle the postwar global trading system.

CNN's Jake Tapper asked him to imagine how Canada will see this: "From the perspective of Canada ... Canada would say, 'National security exemption? We fight with you in every war. Our soldiers are right next to your soldiers in every conflict. What possible scenario could you envision where we wouldn't supply you with steel and aluminum?'"

Navarro did leave one hopeful possibility for Canada.

He said that while no countries will be excluded, some key industries might be. Of particular concern to Canada is the auto industry — and how these tariffs would play havoc with cross-border supply chains that use steel and aluminum.

"There's a difference between exemptions and country exclusions," Navarro said on CNN.

"There'll be an exemption procedure for particular cases where we need to have exemptions so business can move forward. But at this point in time there would be no country exclusions."

The issue has sparked a ferocious debate within the White House. Last week, it appeared President Donald Trump had frozen out the free-traders in his office and made this announcement with the support of hawks like Navarro.

American press reports have also described the president feeling angry and isolated in recent days. His administration has been hit with resignations, infighting and conflict-of-interest allegations involving the president's own son-in-law, Jared Kushner.

A pro-Canada chorus in the U.S. urges Trump against tariffs on neighbour

NAFTA: A summary of where talks stand