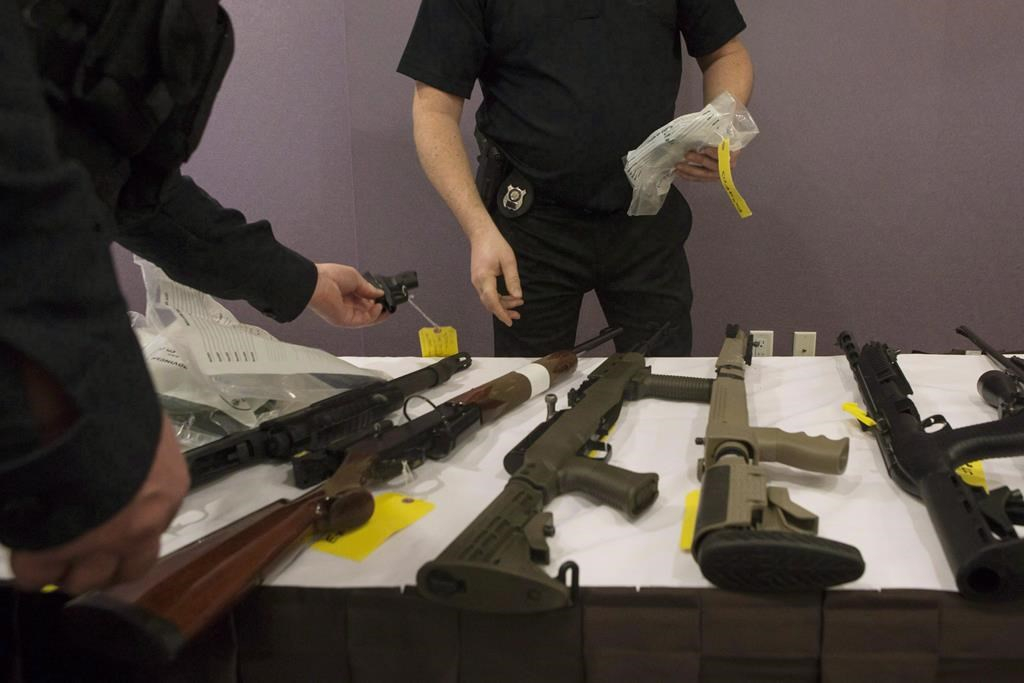 The federal government has been eyeing changes that would allow authorities to more quickly identify people considered unfit to have guns for reasons such as mental instability or violent behaviour, an internal memo shows.

The Liberals are planning to introduce legislation in coming weeks to fulfil platform promises on firearms — including a requirement for "enhanced background checks" for anyone seeking to buy a handgun or other restricted gun.

The federal memo, released under the Access to Information Act, indicates the government could go further, beefing up screening of those who already have guns "by allowing authorities to reassess licence eligibility in a more timely fashion."

Keeping guns out of the wrong hands is just one of the issues to be debated at a national meeting on gun and gang violence in Ottawa today that will include members of government, law enforcement, academia, community organizations and big-city mayors.

It is also preparing legislation to strengthen controls on the movement, licensing and tracing of firearms — measures that would repeal some elements of a bill passed by the previous Conservative government.

Under the current application and renewal process, personal information helps determine whether someone is eligible for a firearms licence. In addition, "continuous eligibility screening" means criminal behaviour can be flagged for the federal chief firearms officer for review and possible investigation.

Federal statistics show 2,223 firearms licences were revoked in 2016, with mental health concerns figuring in 424 of these.

Certain professionals such as doctors, therapists and social workers have discretion to inform police of behaviour indicating that someone might harm themselves or another individual with a gun, notes the federal memo prepared for a May 2017 meeting of the Canadian Firearms Advisory Committee, which provides advice to the government.

The memo, intended to generate discussion among committee members, also cites a Quebec law that requires people working at childcare facilities, schools and shooting clubs to report such behaviour to police. "Identifying individuals who are no longer eligible for a firearms licence as quickly as possible and ensuring they can no longer access firearms is an important public safety objective."

Privacy considerations need to be carefully considered to ensure "the right balance" between privacy rights and public safety, the memo adds.

The federal plans to crack down on the illicit gun trade and gang violence has won approval from some representatives of the firearms community. But they are wary of measures that would impose new burdens on legitimate owners or merchants.

"We take minister Goodale at his word that he will take concrete action against violent criminals. If the minister’s course of action focuses on the drug war and those who perpetuate the violence it breeds, we wholeheartedly and unreservedly support him," said a recent Canadian Shooting Sports Association commentary.

"We remain cautious, however, as history has shown that governments often attack the low-hanging fruit, lawful gun owners, in their rush to appear to be doing something about criminal violence — rather than do the hard work required to end it."

Firearms organizations are framing the issue in a way that denies any connection between gun control and illegal guns or violent crime, says the group PolySeSouvient, composed of graduates and students of Montreal's Ecole Polytechnique, where 14 women were gunned down in 1989.

"Virtually all the guns used in mass shootings in Canada in recent history were legally owned at the time of the shooting," the group says. "While illegal guns definitely pose a risk to public safety, so do legal guns."

Canada has a strong firearms regime, and there is room to improve it while avoiding divisive politics, said Matthew Dube, the NDP public safety critic.

"I think everyone agrees that there is a way to have a balanced approach."