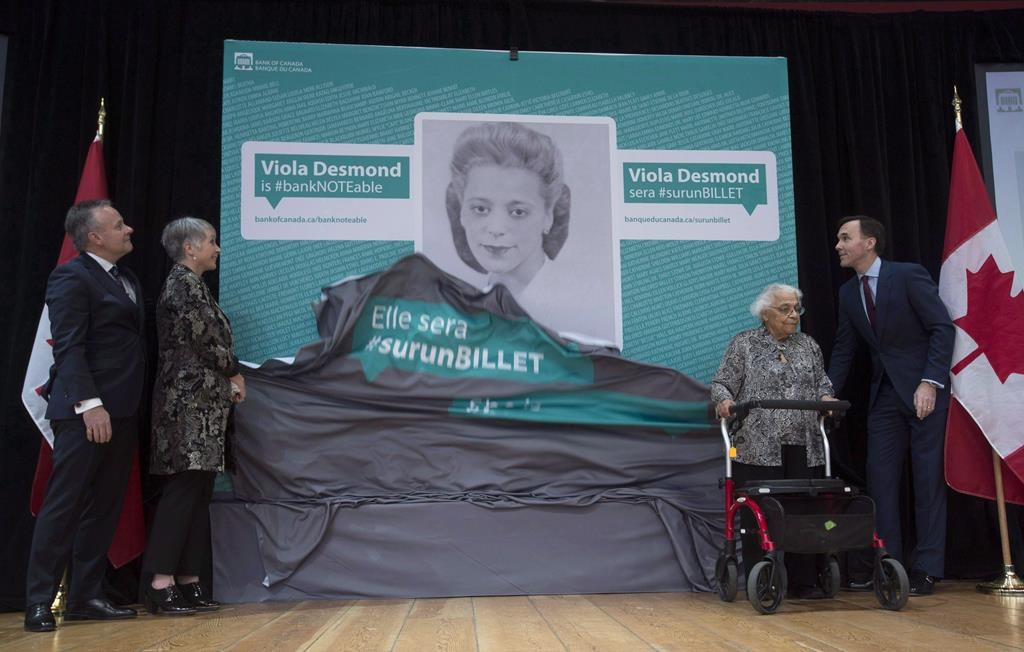 Stephen Poloz, Patricia Hajdu, Bill Morneau, and Wanda Robson, Desmond's sister, unveil an image of Desmond who will be featured on the new Canadian ten dollar bill during a ceremony in Gatineau, Que. on Dec. 8, 2016. File photo by The Canadian press/Adri
Previous story
Next story

Viola Desmond's trailblazing act of defiance — overlooked for decades by most Canadians — will be honoured in a Halifax ceremony this afternoon that cements her new status as a civil rights icon.

At about 12:30 p.m. AT today, a new $10 bill featuring Desmond will be unveiled by Finance Minister Bill Morneau and Bank of Canada Governor Stephen Poloz.

Desmond will be the first black person — and the first non-royal woman — on a regularly circulating Canadian bank note.

"It's a long-awaited sense of belonging for the African Canadian community," said Russell Grosse, executive director of the Black Cultural Centre for Nova Scotia.

"The launch of the bill sends people of African descent the message that Canada is finally accepting us. We belong."

The bill marks a growing recognition of Desmond's refusal to leave the whites-only section of a Nova Scotia movie theatre on Nov. 8, 1946 — nearly a decade before Rosa Parks refused to give up her seat on a segregated bus in Alabama — and the seminal role it played in Canada's civil rights movement.

While her civil disobedience was remarkable, Grosse said racial segregation and systemic discrimination was once commonplace in Nova Scotia.

That's what makes the new $10 bill such a powerful act of acceptance, he said.

"It's a remarkable story. It really shows the progression of society, and that's one of the reasons why it seems to have gained this groundswell of interest over the last couple years," Grosse said.

Her story went largely untold for a half-century, but in recent years Desmond has been featured on a stamp, and her name has graced a Halifax harbour ferry since 2016. There are plans for a park in Toronto and streets in Montreal and Halifax to bear her name.

"Viola Desmond carried out a singular act of courage. There was no movement behind her, she was ahead of the times," said Isaac Saney, a senior instructor of black studies at Dalhousie University.

It started with a business trip 71 years ago. Desmond, a beautician and entrepreneur who sold her own line of cosmetics, was headed to Sydney, N.S., when her car broke down. Stuck in New Glasgow overnight, she decided to watch a movie at the Roseland Theatre.

The segregated theatre relegated black patrons to the balcony, while floor seating was reserved for whites. Desmond, who was shortsighted and could not see properly from the back, sat in the floor section and refused to leave.

She was dragged out of the theatre by police, arrested, thrown in jail for 12 hours and fined.

It would take 63 years for Nova Scotia to issue Desmond, who died in 1965, a posthumous apology and pardon.

Anna Paquin, Viola Desmond among those added to Canada's Walk of Fame