Canadians creating more waste and lack co-ordinated way to deal with it: report 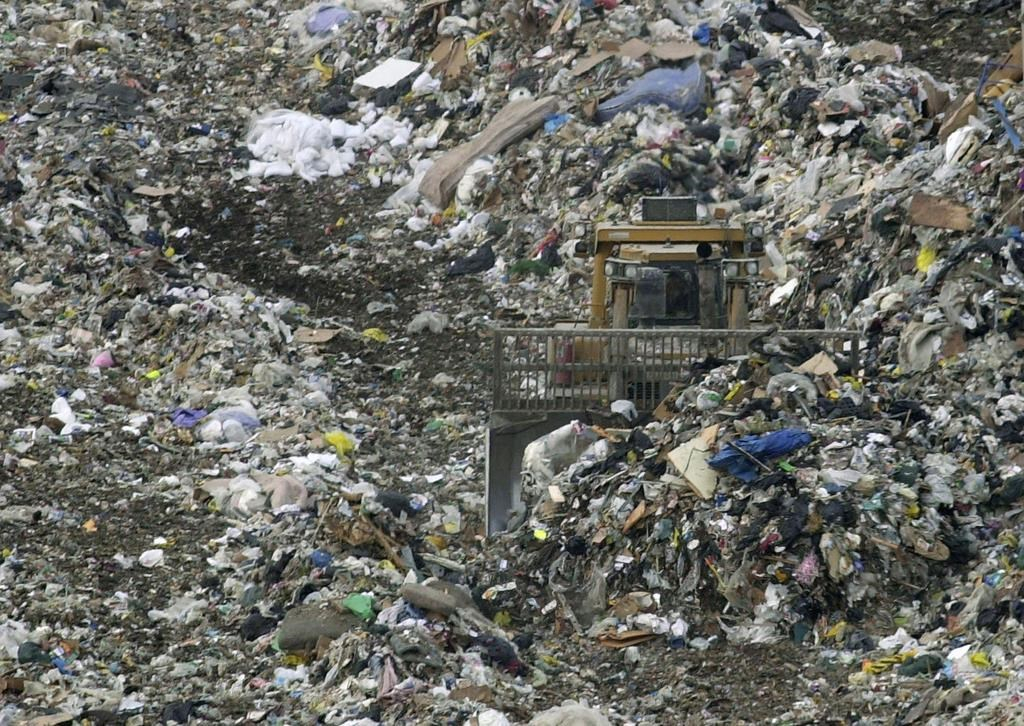 Garbage is moved at a landfill in Sumpter Township, Mich., Monday, March 3, 2003. A massive report by the three countries in the NAFTA says the amount of waste Canadians generate continues to increase. File photo by The Associated Press/Paul Sancya
Previous story
Next story

An extensive report by the three countries in the North American Free Trade Agreement suggests Canadian homes and kitchens continue to generate more and more waste.

And the Commission For Environmental Co-operation concludes there's a big role for the federal government to help deal with it, starting with co-ordinating the handling of organic garbage from households across the country and helping create markets for products generated through recycled waste.

"To have standards available that allow purchasers or agricultural users to know what they're getting is something that we see has a real potential value," said report co-author David Donaldson. "That's one area that real co-ordination at a national level could be useful."

In recent years the governments released guidelines on compost quality and are working to increase the amount of organic waste diverted from landfills.

"Increasing organic waste diversion is one of the ongoing priority areas of work," the department said in an email.

Non-hazardous waste is a provincial and local responsibility in Canada, making it tough to get current information on waste and how it is disposed, Donaldson said. The most recent information in his report is six years old.

But that's enough to suggest that Canadians, already among the world's champion garbage creators, are making more of it.

Residential food, yard and paper waste per person increased from about 230 kilograms per person in 2002 to almost 300 by 2012.

"We, as North Americans, are very good at consuming," Donaldson said.

Less than a third of that waste is diverted from landfills into recycling, composting or other such facilities.

Simply dumping that material into a hole in the ground squanders an opportunity to turn that waste into a valuable commodity such as soil compost, Donaldson said.

It also wastes existing capacity. The study suggests that Canadian composters are underused by 38 per cent and could take 1.6 million more tonnes of waste than they currently do.

The report says a national agency is needed to collect data and share best practices. In Nova Scotia, for example, disposing waste in clear bags instead of black ones lets recyclers see what's inside more easily and has increased organics and recyclables diversion by up to 40 per cent.

A consistent product, assuring consumers that compost they buy has the same qualities whether they buy it in Saskatoon or Chicoutimi, Que., would go a long way toward building a market. That's a job for a federal group, said Donaldson.

Governments can also increase recycling by making it more expensive to simply toss waste in the landfill.

In Alberta, landfill tipping fees are as low as $25 per tonne, while it costs at least twice that to run a small composting operation, says the report.

"It does create a disincentive for organizations to dispose of organic waste in a way that would be ideal," Donaldson said.

Government can also provide incentives for energy created during treatment of organic waste such as biogas to feed back into the system.

And they can also provide the education and information to encourage Canadians to generate less waste in the first place.

The benefits are big, from reducing taxes spent on landfills to increasing the productivity of agricultural soils. Improving the handling of organic waste could even cut 3.4 megatonnes from Canada's greenhouse gas emissions as dumps release less methane and carbon dioxide.

"You've really taken from the land when you grow food," he said.

"You're taking these nutrients and you're not returning them. Just that capacity to use nature and benefit from that is an important place to start."