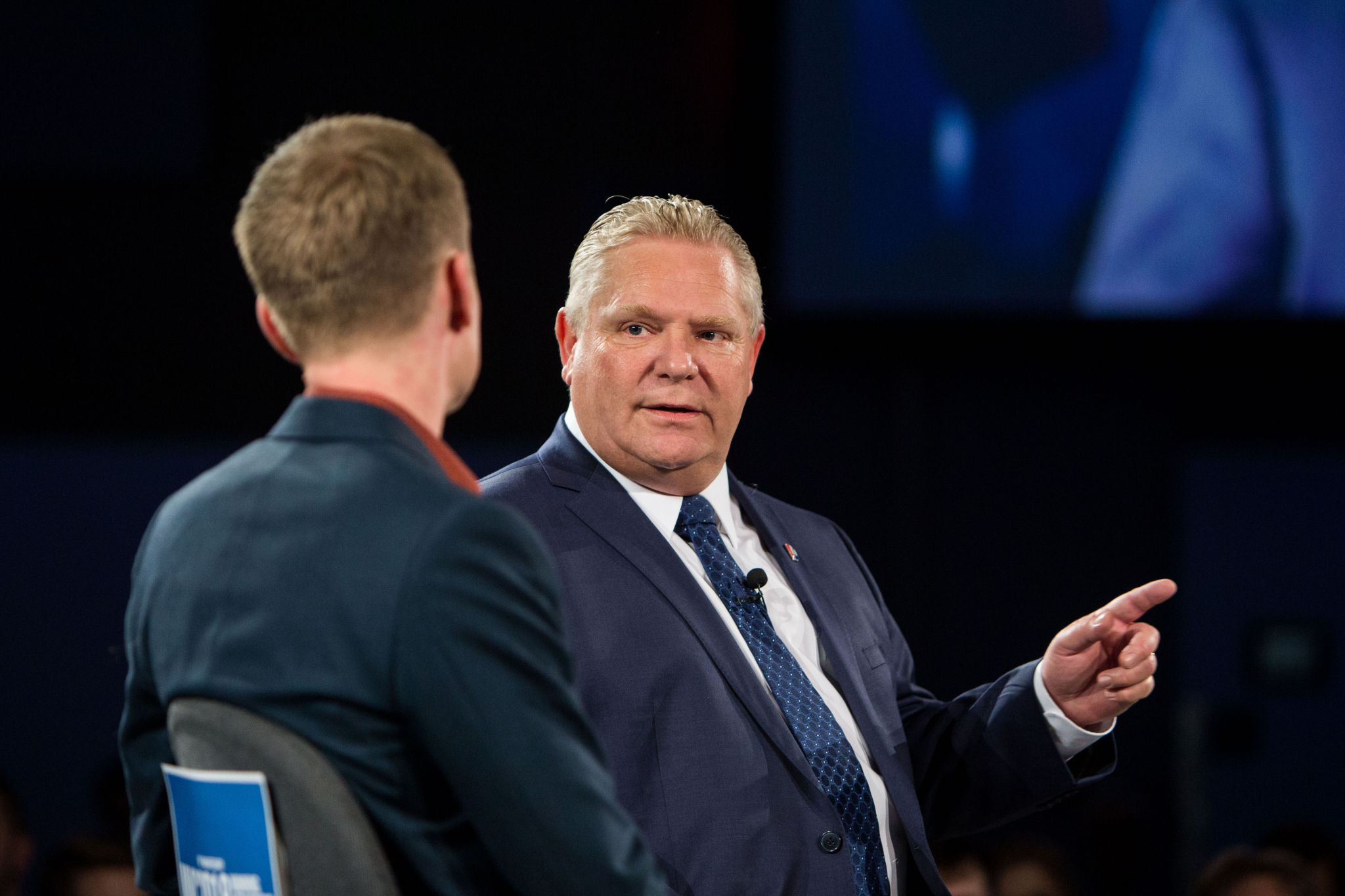 Doug Ford speaks to journalist Anthony Furey on Feb. 10, 2018 during a session at the Manning Networking Conference in Ottawa. Photo by Alex Tétreault
Previous story
Next story

There was mayhem in Markham, Ontario on Saturday evening as Progressive Conservatives scratched their heads to figure out who had won their party's leadership race.

The melodramatic victory followed a series of allegations of voting irregularities in the leadership race for the party, which now forms the Official Opposition in the Ontario legislature ahead of an anticipated provincial election in June.

While initial reports by the CBC had previously suggested that Ford had won the race, those results were later under review on Saturday evening following an apparent challenge from the camp of former Tory MPP Christine Elliott, the public broadcaster reported.

Lawyer Caroline Mulroney and social conservative activist Tanya Granic Allen were the other candidates in the race.

But Elliott herself declined to concede Ford's victory, citing "serious irregularities" in the race. In a statement sent to multiple media outlets, Elliott's team said that she had won the popular vote and a majority of ridings, and it alleged that thousands of votes had been incorrectly assigned to the wrong ridings.

The confirmation of Ford's victory came after Progressive Conservative officials had told members gathered in the Toronto suburb for the results that they had to go home early because the party no longer had access to the room it had booked for the occasion and would need more time to review the list of electors and tabulate the votes.

Speaking later, Ford made little mention of the convention confusion that drew angry jeers from the crowd, focusing instead on the June election in which he will now face Liberal Premier Kathleen Wynne.

"I am so grateful for the support and the confidence of the PC members," Ford, who was flanked by Granic Allen, told the sparse but enthusiastic crowd that remained to hear the results.

"We're going to spend the coming weeks getting the party in fighting shape, because the people of this province are ready for change."

Ford said he had not spoken to Elliott, who had not officially conceded late Saturday after her third failed bid for the party leadership.

He vowed to hold a news conference "in the coming days" but gave no specifics.

The governing Liberals were quick to denounce the new Tory leader, issuing a scathing statement minutes before the results were even announced.

"The Conservative party is going into this election with more radically conservative policies than Mike Harris, Tim Hudak or Stephen Hardper ever ran on," Liberal campaign co-chair Deb Matthews said.

"The billions in cuts they are promising and the divisive social conservative policies they are championing will hurt Ontario's economy and change our province for the worse."

Elliott has painted herself as the only one with the political experience to get the party election-ready in time, while Ford has said his business sense equips him to cut government waste.

Meanwhile, Mulroney — the only leadership hopeful already declared a candidate in a riding — has presented herself as a fresh face, and Granic Allen has emphasized her ties to the party's grassroots.

While all four have pledged to scrap a proposed carbon tax that formed a key pillar of the party's election platform introduced in November under former leader Patrick Brown, the race has focused less on detailed policy promises and more on the party's culture.

The Tories were plunged into turmoil when Brown stepped down in late January amid allegations of sexual misconduct, which he has consistently denied.

His abrupt departure uncovered issues with the party's structure, problems with its nomination processes, and discrepancies in its membership numbers, leading the Tories' interim leader to declare he would "root out the rot" before handing over the reins to a new leader.

The party has since reopened two nominations in contested ridings and abandoned a legal battle with a former party member who clashed with Brown over the nominations and other issues.

The Tories have also upgraded their IT system in response to a cyberattack last fall and cut undisclosed contracts in their effort to move past the wave of controversies that has drawn national attention in recent weeks.

But the leadership race itself has stirred strife and forced party brass to defend their decisions on a number of fronts.

Tensions grew when Brown, fresh off a campaign to clear his name, announced he would throw his hat in the ring in an attempt to reclaim his job.

Some of Brown's rivals initially denounced his candidacy, calling it a distraction, but then stepped back to focus on their own campaigns. Mulroney, however, called for him to back out of the race, which he eventually did, citing the strain on his friends and relatives.

All four candidates have also raised the alarm over possible membership fraud and delays in member registration.

Ford, Mulroney and Granic Allen pushed for the party to extend the race by a week to allow votes from those who received key documents late, but the leadership election organizing committee said doing so would contravene the party's constitution.

The organizing committee extended the registration deadline three times and even gave members an extra half-day to cast their ballots, but such actions were not enough to fend off allegations of vote suppression and corruption within the party ranks.

A lawyer representing one disenfranchised party member sought a court order Friday to have the voting period for the race extended for a week. A judge ruled Friday evening to reject the application.

As of 8 a.m. Friday, 71,402 party members had been verified and the party confirmed that 64,053 members had voted when balloting closed at noon Friday.

Ford's victory was announced after 10 p.m., without any of the pomp and fanfare that was expected earlier in the day when hundreds packed a hall north of Toronto expecting to celebrate the start of a new and more positive chapter in party history.

Instead, after a 4.5-hour delay, the chair of the party's leadership election organizing committee dismissed the irate crowd with a terse statement about the need for a review of the results and announced the issue would be resolved in the "short term" without providing any details.

"There's a review underway of an allocation of a certain list of electors that needs to be resolved because it may have an impact on electoral votes," Hartley Lefton said, his words increasingly drowned out by jeers and boos.

Lefton dismissed the assembled party members from the hall they'd occupied since late Saturday morning, saying the organization no longer had access to the premises.

William Coleman, a staunch Ford supporter, said he was angry at the party's handling of what should have been a turning point and worried the delays and confusion over who won could affect the party's image at a time when it is striving to appear united and authoritative.

"If we're going to win the general election ... stuff like this only makes things worse," he said.

Others appeared undisturbed, saying the hurdles would be long forgotten once a leader was chosen.

"Whatever it takes, as long as we get it right and then we're behind whoever the candidate is," said Jeffrey Thomson, a longtime party member.

More than 64,000 votes were cast in the hastily organized leadership race.

"This was pretty much the most mishandled party executive communication exercise I've ever witnessed on television," she said.

"This party is very clearly very fractured ... That made it even more important that this executive running this election had to be perfect. There's not even the latitude for error that a normal party might enjoy," she said.

The contest was launched in late January after former leader Patrick Brown resigned abruptly amid allegations of sexual misconduct that he has consistently denied.

Brown tweeted his congratulations to Ford on his victory.

"We are all behind our new leader and focused on our common goal of defeating the disastrous Wynne Liberal government," he said.

While all four competing to replace him pledged to scrap a proposed carbon tax that formed a key pillar of the party's election platform introduced in November under Brown, the race has focused less on detailed policy promises and more on the party's culture.

Mulroney, the only candidate to be nominated in a riding, tweeted her support for Ford after the results were announced and said she would be back knocking on doors Sunday.

"Today, we leave this convention united with one common goal, finally firing Kathleen Wynne," she said.

Saturday's delays and ultimate postponement were the latest in a long list of challenges that have plagued the party in the days since Brown's departure.

The party uncovered issues with its structure, problems with its nomination processes, and discrepancies in its membership numbers, leading interim leader Vic Fedeli to declare he would "root out the rot" before handing over the reins to a new leader.

The leadership race itself has stirred strife and forced party brass to defend their decisions on a number of fronts.

Chief among these were a number of complaints about the complex rules for the online vote, including repeated claims that the necessary voting documents sent via regular mail were not reaching party members on time.

Editor's note: This article was updated with information about Doug Ford's victory at 12:55 a.m. ET on March 11, 2018. It was updated again at 1:15 a.m. with additional comments from Christine Elliott's campaign.

This is the party that thinks

This is the party that thinks they're capable of running the Province of Ontario?
It can't even organize and hold a credible leadership campaign or convention.

Make room for Andrea and Mike, Kathleen. It's still not going to be a walk in the park after this PC fiasco.