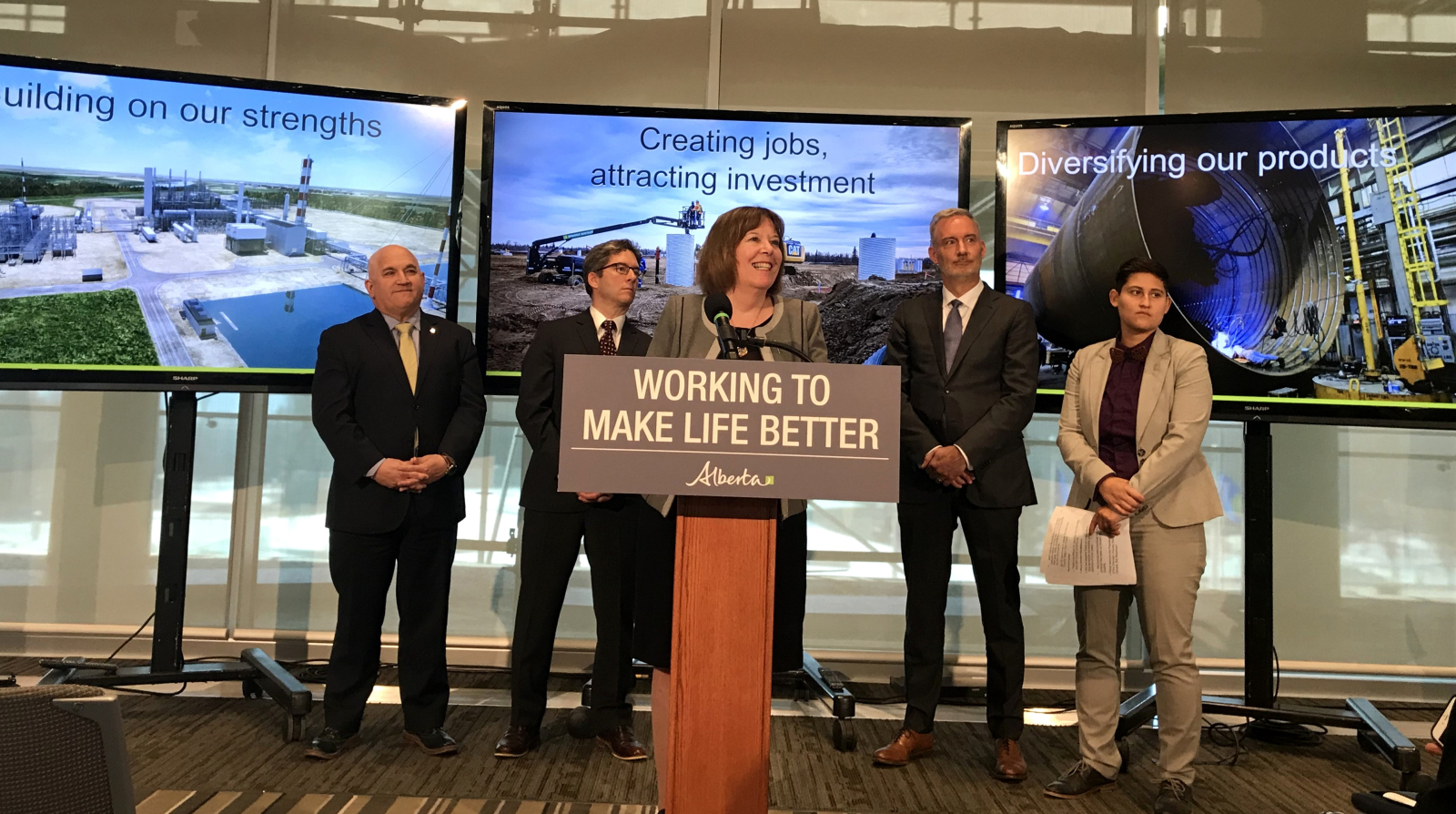 Alberta's NDP government has taken the latest step in its attempt to diversify the province's fossil fuel sector away from its reliance on oil and gas production.

The province’s Energy Diversification Act, introduced March 8, would commit up to $2 billion for new programs supporting the petrochemicals sector, which makes products like plastics, asphalt, pharmaceuticals, lubricants and fertilizer.

A report by Alberta’s “energy diversification" advisory committee released this year described petrochemicals as a growth area for the industry, as the world transitions to electric vehicles and renewable power.

Petrochemicals are the largest manufacturing sector in the province, yet oil and gas mining has been "the focus of government policy for the past 70 years," the report stated.

“Adding more value to our raw products at home means more jobs for Albertans and getting top dollar for our resources,” Alberta Energy Minister Margaret McCuaig-Boyd said in a new announcement.

The new spending comes as Alberta's NDP government is embroiled in a major political battle with its neighbouring B.C. government, also led by the NDP, over a pipeline project, Kinder Morgan's Trans Mountain expansion.

While Alberta supports the project and says it's critical to jobs and growth for its industry, which has access to the world's third-largest reserves of crude oil after Saudi Arabia and Venezuela, the B.C. government has been trying to stall the project, fearing it would cause a devastating spill on the west coast.

With its new incentives, Alberta said it was hoping to encourage building a new plant to convert ethane — the second-largest component of natural gas after methane — into components to build household products like detergent, garbage bins and cutting boards.

The NDP government says that will help boost Alberta’s “competitiveness” against jurisdictions like the U.S. Gulf Coast, where both ExxonMobil and Chevron Phillips are opening up similar plants outside of Houston, Texas.

This plant, called an "ethane cracker," would cost between $8 billion and $12 billion to build in Alberta, the report said, and take seven to nine years to build, including the process to plan and obtain permits.

The province says the new programs should spur “thousands of construction jobs” and “hundreds more in operations” in addition to royalties and tax revenue.

The new plant will need to be fed with between 80,000 and 100,000 barrels per day of ethane. The province also wants to encourage the fossil fuel industry to build more infrastructure necessary to capture more natural gas liquids in their operations.

"The time has come to put more emphasis on downstream diversification," the advisory committee report said. Downstream refers to refineries, plants and retail outlets that make products like plastics, while upstream refers to the exploration and production of crude oil and other commodities.

"The world is changing rapidly, and Alberta must adapt quickly to maintain its role as the economic engine of Canada. Time is of the essence," the reported continued.

Alberta is generating about $4 billion of downstream production, or two per cent of the North American total, the committee found. Meanwhile, it said investment in the upstream energy sector declined significantly from 2014 to 2016, from $60 billion to $26 billion, "and is not expected to return to peak levels."

If they're going to depend on

If they're going to depend on oil, it makes sense to go this route. If there's a way to make it reusable, I think it's worth a try.

This is encouraging. We

This is encouraging. We continue to need petrochemical products though we also need to minimize their impact on the environment, and Alberta has long needed to diversify. This looks like a good solution that will continue to capitalize on it's use of fossil fuels while not having to transport it across sensitive waterways and into the ocean. Congratulations to them for finally getting out from under an unworkable model as the world oil and gas scene evolves.