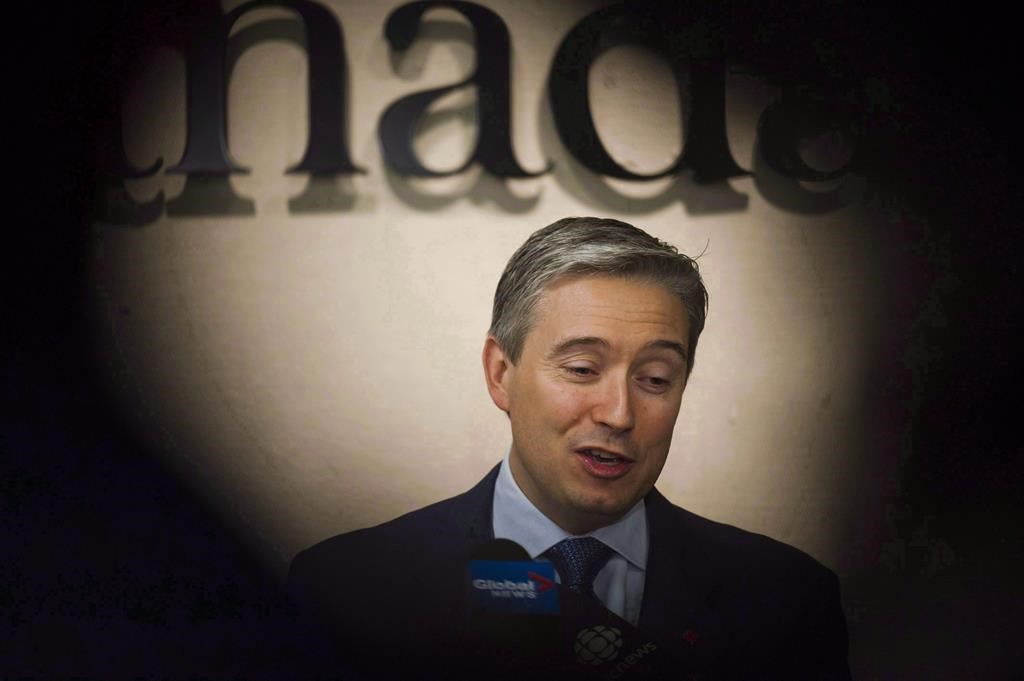 Minister of International Trade Francois-Philippe Champagne speaks to press about the Comprehensive and Progressive Agreement for Trans-Pacific Partnership, in Toronto on Jan. 23, 2018. File photo by The Canadian Press/Christopher Katsarov
Previous story

The two top businessmen named to lead Canada's new foreign investment promotion agency say they've got their work cut out for them.

That's because Invest in Canada and its dedicated team of trade commissioners are embarking on their work after the flow of foreign direct investment into Canada plunged to a seven-year low last year.

International Trade Minister Francois-Philippe Champagne unveiled the long-awaited agency on Monday — 16 months after the federal government first announced it would invest $218 million over five years to create it.

"When you start something, you need to make sure you do that on a strong footing," Champagne said, when asked to explain the delay between the agency's conception and birth.

The minister named Ian McKay, Vancouver-based business leader and a former political adviser to federal Liberal cabinet ministers, as CEO and Mitch Garber, a business executive and philanthropist who is a co-investor and chairperson of Cirque du Soleil, as board chair.

All three touted Canada's international brand as having never been higher and emphasized the need to streamline the hunt for foreign investment.

But neither McKay nor Garber shied away from the challenges that lie ahead, especially in light of some recent numbers that showed a stark decline in the flow of foreign capital into Canada.

A report earlier this month by Statistics Canada said that the influx of foreign direct investment into Canada in 2017 amounted to $33.8 billion, the lowest level since 2010. That fell short of the record-setting flow of $126.1 billion in 2007.

"Compared to our competitors in the OECD, we lag in terms of annual increase of investment attraction and we have a lot of work to do to shrink that gap," McKay said in his acceptance speech.

"We've just got to do a better job of seeking out where the investments are coming from, which sectors, what the global capital flows are looking at, and improve our message, quite simply."

McKay was most recently called in by the Liberal government to smooth over ruffled feathers in Japan — a country in which he has extensive experience — after Prime Minister Justin Trudeau rebuffed the initial attempts by that country and Australia to sign the rebooted Trans-Pacific Partnership last fall.

He was most recently the chief executive of the Vancouver Economic Commission and a former national director of the Liberal Party of Canada.

"Ian has had a distinguished career as an executive in international financial markets and his deep knowledge of the Asia-Pacific region, a priority market for our government, makes him an essential asset to the Invest in Canada team," said Champagne's spokesman Joe Pickerill.

McKay said it is critical that the new agency pursues "a cohesive data-driven approach to presenting our value propositions to global investors" because "the status quo is not going to be good enough."

Garber said in an interview that Canada has "a bit of catching up to do" to attract investors.

"The growth numbers are down and that's what lends itself to starting the agency, to bringing in someone like me who has a business mind about it and a not a government-political mind," Garber said.

"I'm fully prepared to dig into it and understand why the numbers aren't growing and what we need to do to win business that we're currently losing."

As a country of 36 million people, McKay said, "we are fighting against giants and we need to have all hands on deck" but it needs to be done in a focused manner by "a unified central co-ordinating agency."

He said he often tells the story of being in the Vancouver airport departure lounge and finding "four different levels of government on the way to the same mission, telling different messages. So we're going to fix that."

Champagne says he considers himself to be Canada's chief marketing officer, a sort of salesperson in chief, but Trudeau has travelled the globe — from Davos, to Silicon Valley, to China and most recently to India — to sell Canada as a stable, desirable destination of foreign investment.

While the new body will be based in Ottawa, Champagne said it will work across the country.