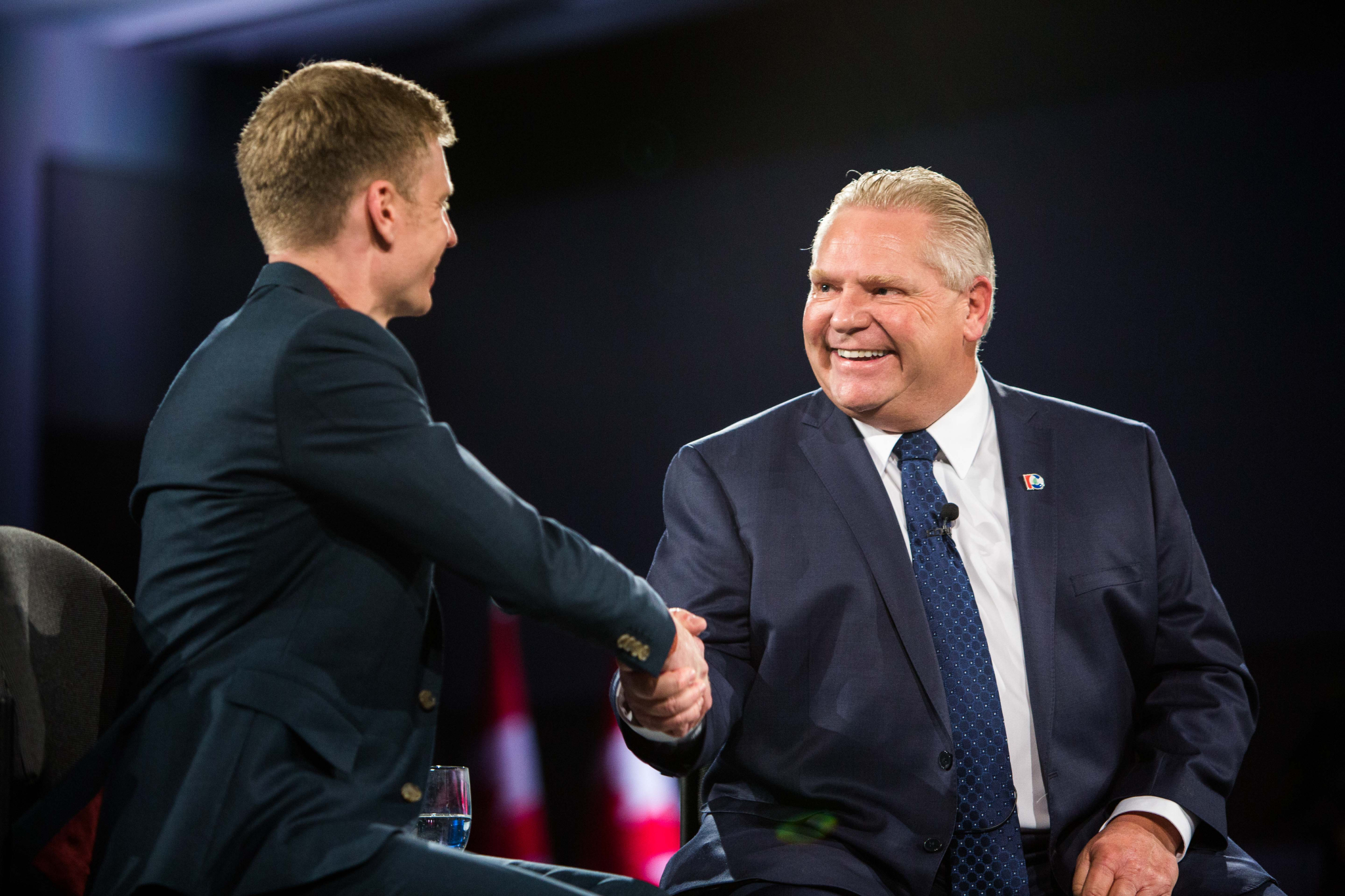 Doug Ford shakes hands with journalist Anthony Furey during a session at the Manning Networking Conference in Ottawa on Feb. 10, 2018. File photo by Alex Tétreault
Previous story
Next story

Ontario's newly elected Opposition leader is vowing to spend much of the next three months on the road campaigning for a spring election, saying his party is focused on forming government so it can find efficiencies and shape up the province's finances.

Doug Ford, who narrowly won the Progressive Conservative leadership late Saturday, laid out his plans to topple the governing Liberals during an unannounced first visit to the province's legislature on Monday, where he met with his new staff.

"I have to be out there non-stop," Ford said. "As my Dad always said, in business, you aren't getting sales in the office. You've got to get sales outside. We're going to be out on the road. You won't see me in here too often."

Ford said he will leave much of the work in the legislature to the party's now former interim leader, Vic Fedeli, who was installed in the post after the sudden January resignation of Patrick Brown amid sexual misconduct allegations.

"I just look forward to getting in here and moving forward," Ford said. "Our focus is going to be on straightening out the finances of this province."

Ford won the Tory leadership following a chaotic convention that saw results delayed over seven hours because of the narrow margin between him and runner-up former Tory legislator Christine Elliott, who initially questioned the vote and took nearly a full day to concede.

Ford, who met with Elliott Sunday night, said they were putting the heated competition behind them.

"We're going to move forward as a cohesive group," he said of the party that has been plagued by infighting in recent weeks. "I talked to numerous MPPs, endless candidates. We're all excited."

Ford also said he spoke with Liberal Premier Kathleen Wynne on Monday, saying he had great respect for her.

"She's a great campaigner, a great debater. I never underestimate her," he said. "But she's never debated Doug Ford before and I can't wait."

Ford, who has curried favour with social conservatives and vowed to wrest power from political elites, also said Monday that he would review the Liberal government's sex-education curriculum, but denied he wanted to debate access to abortion in the legislature, despite raising questions about the matter last week.

"(Abortion) is not on the top of my priority list," he said. "We're going to reduce hydro rates, start attracting great-paying jobs and business."

Ford also repeated his plan to do away with a carbon tax proposed under Brown to replace the Liberals' cap-and-trade system, but has so far not provided details on how he'd make up for the billions from the tax that were to fund major Tory campaign promises, including a income tax cut.

Wynne said voters will have a "stark" choice between her Liberal party and Tories when the province heads to the polls in June.

"Mr. Ford and I disagree on a lot of things," she said Monday morning. "I think what we are putting forward as a platform is very, very different than what any of the Conservatives were putting forward, which is cutting and removing supports from people."

Wynne said Ford's selection as Tory leader won't change how her party plans for the spring vote, pitching herself as the candidate ready to invest in people.

"I need to focus on what it is that people are saying to me in terms of what they need," she said.

Western University political science professor Cristine de Clercy said it's difficult to say just where Ford will take the Tories when it comes to policy, but noted that his populism could pose a problem for his rivals.

"Mr. Ford's populism carries with it the promise to corrode the bases of the other two parties," she said. "The New Democrats and the Liberals both have to worry about losing key voters to Mr. Ford because they're attracted to his populism regardless of his ideology."

"We actually don't know much about him as a leader," she added. "His biggest challenge is now to define himself for voters so they can understand what exactly he proposes to do."

"Obviously, there are parallels," he said. "We're talking about somebody who shoots from the hip. Somebody who speaks frequently before he thinks. Somebody who clearly feels comfortable in the role of street fighter."

Ford's top challenge will be to stay on message, Kay said.

"The question is can Ford hold (the Tories') lead in the polls. I think Elliott would have," he said. "I think he's more accident prone."