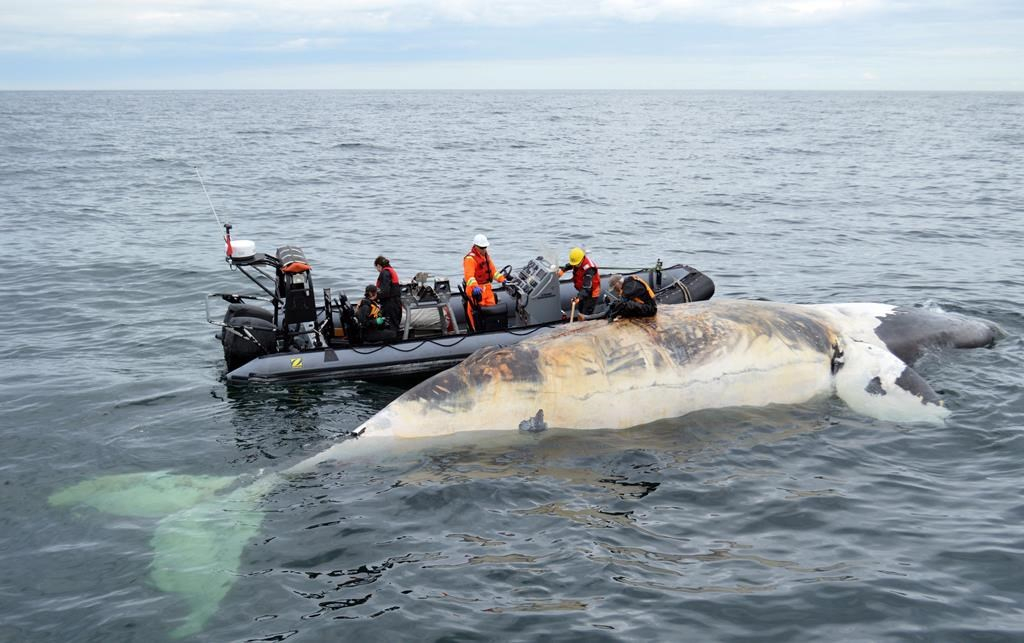 Researchers check out a dead right whale in the Gulf of St.Lawrence in a handout photo. Handout photo by The Department of Fisheries and Oceans
Previous story

The federal government is spending more than $9.1 million to develop and test technologies that alert vessels to the presence of whales, lowering the risk of collisions.

The University of British Columbia will examine how the whales have been affected by changes in the supply and quality of chinook salmon, its source of food. Another study by Ocean Wise will assess the impact environmental stressors are having on the whales, particularly noise and limits on prey.

LeBlanc said Thursday there is a responsibility to ensure whales are protected for future generations.

LeBlanc said the government is not planning to stick to studies only and suggested there will be more announcements in coming weeks.

"We're not suggesting that all we need to do is have more studies, we think studies are part, and science investments are part, of informing better public policy and decisions," LeBlanc said.

He said it takes time to co-ordinate action with stakeholders and the government is not afraid to make decisions that offend some parties.

"We're going to be making a series of decisions in the coming weeks that may necessarily represent some disruption for certain sectors but will be guided by scientific advice and our solemn responsibility to ensure the protection and recovery of southern resident killer whales," LeBlanc said.

There are 76 southern resident killer whales left and the groups said they have up to a 50 per cent chance of disappearing in the next century. The population has declined from a high of 98 in 1995.

On Wednesday, Washington Gov. Jay Inslee issued an executive order outlining a protection strategy for both the southern resident killer whales and chinook salmon. The state lists chinook as an endangered species.

Immediate steps outlined in the order include developing strategies for quieting state ferries in areas most important to the whales and, by April 30, reviewing and amending recreational and commercial fishing regulations in orca habitats, as needed.

The order also creates a task force to bring together state agencies, tribal leaders, local governments, federal partners and other stakeholders on the issue.

"It doesn't provide the kind of action we need immediately to recover the orcas," he said.

He said the orcas will need to see concrete actions, such as limiting whale watching when they are foraging, and other specific measures within the next two to three months to make it in time for the chinook feeding season in the Salish Sea.

The species has been listed as endangered for more than 16 years, he said, and little action has been taken since Canada created a plan 14 years ago.

"We waited 14 years for an action plan and we're still struggling to get action. It's kind of ridiculous to see how slow things are here. We need to do better, we have a responsibility to do better," Alidina said.

By The Canadian Press in News, Politics | March 5th 2018
Opinion