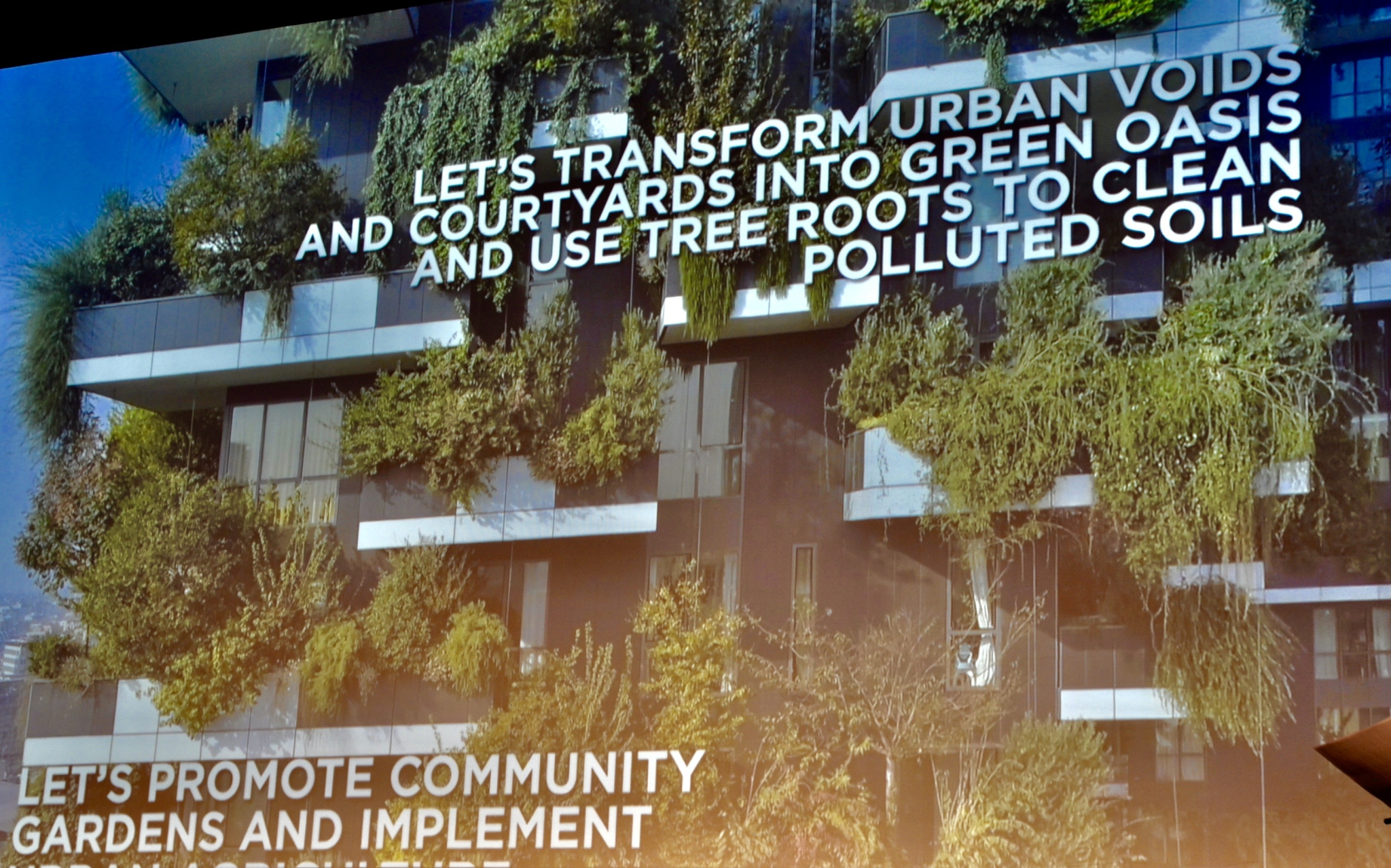 Marshall McLuhan once said “We don’t know who discovered water, but we know it wasn’t a fish." The point being that you don’t know what you’re swimming in if you’ve never seen anything else. This seems like an apt metaphor for the mood at the GLOBE Forum 2018 in Vancouver, an event that brought business leaders together to tackle the daunting environmental challenges that humanity faces. Whether it’s corporate North America’s failure to recognize climate change as a material risk or our blindness to the impending disruptive change that new technology is poised to deliver, we are living in uncertain, perhaps unknowable times.

Wal Van Lierop, the founder and managing partner of Chrysalix Energy, echoes McLuhan’s refrain when he says people never know when they’re living in a bifurcation. He’s referring to the historical inflection points where new technologies radically change the course of history. "How many of you use a Blackberry?" he asks, proving the point that a platform can go from ubiquity to obsolescence in a very short time. Van Lierop believes that we are witnessing one of those moments in the energy sector.

Van Lierop and his fellow attendees at GLOBE see the world in broad terms. They represent businesses that look at global trends and risks and use that analysis to decide how to allocate trillions of dollars. Attendees this year included former U.S. Treasury Secretary Robert Ruben, heads of insurance companies and banks, former heads of states, and national and provincial ministers. For everyone in attendance one thing was clear: the environment needs our help. But how can business, government policy and new technology help us battle climate change and environmental degradation? The answers came in many forms. 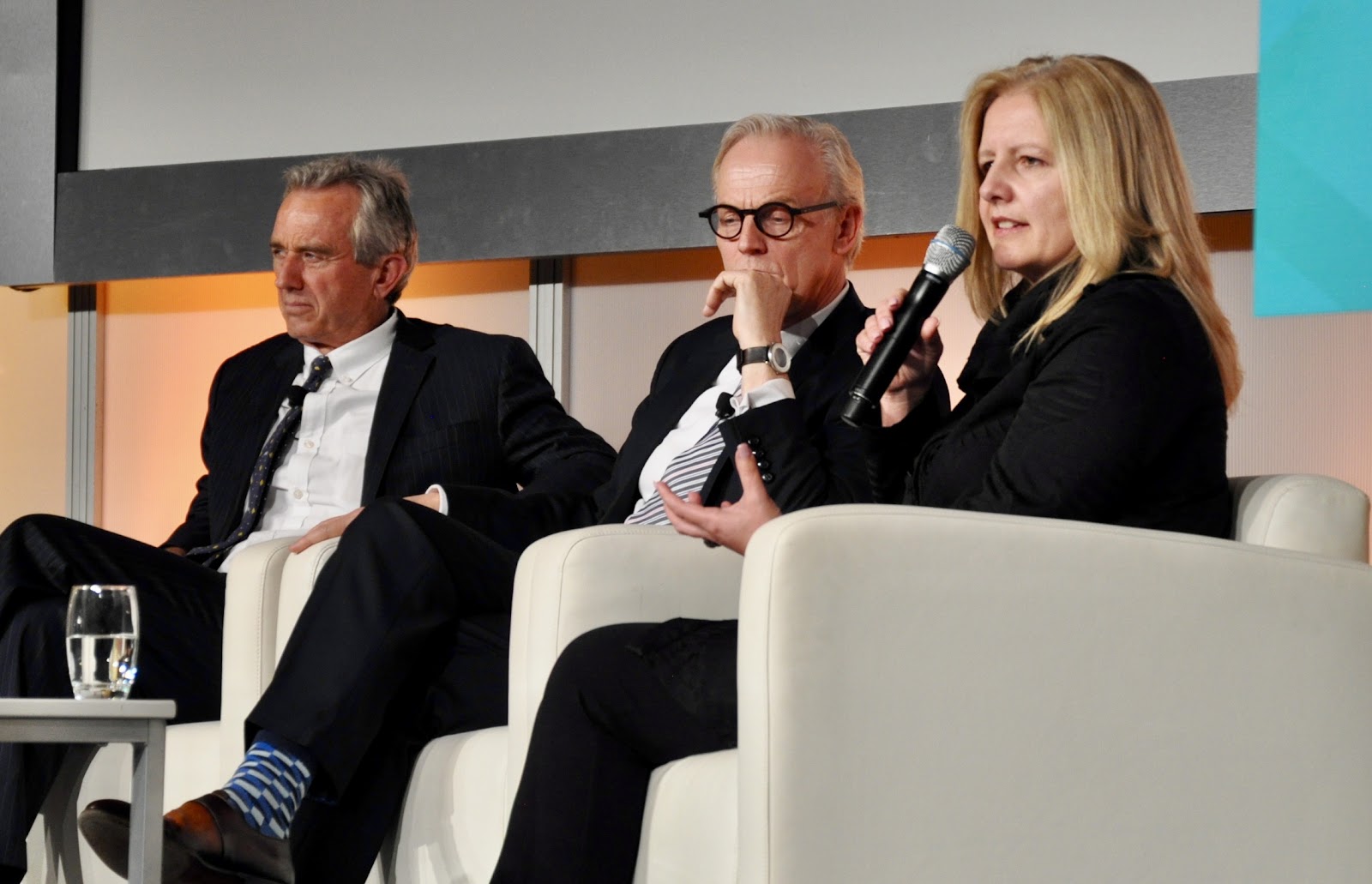 The markets are already in our favour

In the commodity business cost is king and as the cost of renewables drops below fossil fuel sources, the shift to cheaper, cleaner energy will be disruptive, swift and irreversible. Chrysalix’s Van Lierop believes we are living in an era of abundant, cheap energy. Traditional energy has been out-innovated in the past four years. Technology like solar and wind are challenging traditional energy companies and reducing their fossil fuel platforms to stranded assets and he thinks we’ll be surprised at how quickly the fossil fuel industry’s stranded assets will no longer be viable competitors to renewables.

Speaking on the same panel was Robert F. Kennedy, Jr. Kennedy agreed that the markets are now working in favour of green technology but traditional energy’s incumbent players are using anti-market tactics to preserve the value of their obsolete assets.

For Kennedy, the enemy of innovation is inertia, and incumbents want to fortify that inertia. According to Kennedy, groups like the Koch brothers, significant holders of fossil fuel assets, are significant obstacles to the free market adoption of better, cleaner energy solutions. He says that they are working in nearly every state to end electric energy and in some states it is easier to get a permit to put a pipeline down than it is to put up a solar panel. The rear guard actions of these retreating defenders of old energy technology could impact North America’s standing as an energy leader. These agents of inertia are now operating in the context of the Trump administration.

According to Kennedy, Trump’s policies will negatively impact the pace of adaptation for wind and electric vehicles in the U.S., but globally the world will move on, with India and China taking the lead. As a result, Trump won’t hurt the globe but he will hurt the U.S., because other countries will make these new technologies available, even to Americans, for less. As a consequence countries who aren't adapting at home as fast may pay less for green energy but India and China will own the future.

Whether it’s corporate North America’s failure to recognize climate change as a material risk, or our blindness to the impending disruptive change that new technology will deliver, we are living in uncertain, perhaps unknowable times. 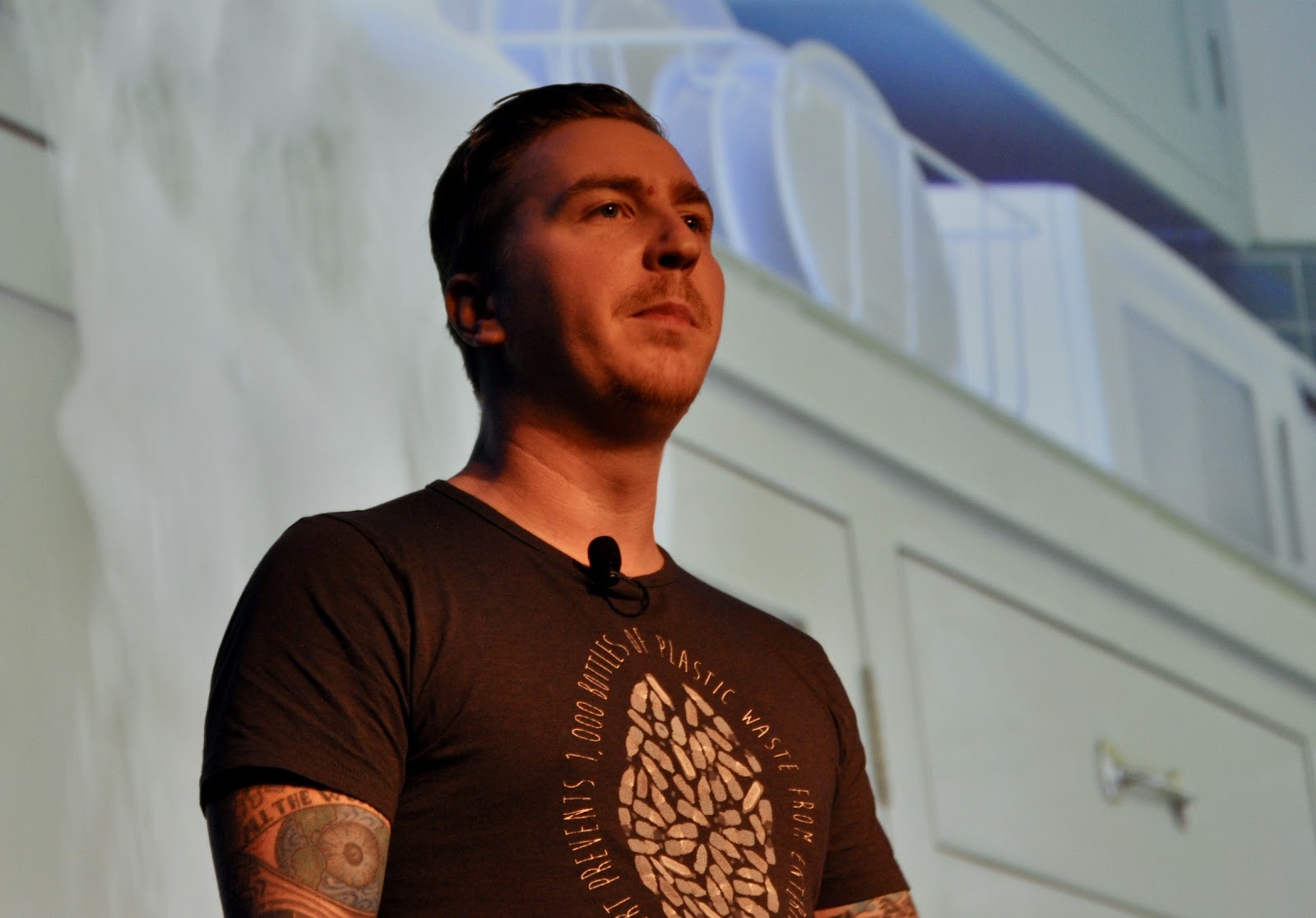 In addition to new forms of energy, technology offers new ways to manage our resources by being smarter and more efficient. Technology can also capture the social cost of our activities in a way that can be priced into goods and services. One promising new technology in this area is blockchain (also known as cryptocurrencies). Blockchain technology has become an overused buzzword but new applications of blockchain show real promise.

According to Shaun Frankson, co-founder of The Plastic Bank, blockchain technology represents a key ingredient in solving the ever growing problem of plastic pollution. According to Frankson, most plastic comes from developing countries that don’t have proper systems to dispose of it. Frankson sees plastic as unmined gold. The issue is not the lack of value, but the lack of a buyer in the market. Plastic Bank is using blockchain technology as the currency that underlies a new market that lets local residents collect plastic for blockchain credits. These credits are stored as cryptocurrency and can then be used to pay for things like electrical charging stations and other services. By using blockchain, Plastic Bank is helping communities in Haiti, the Philippines and elsewhere reduce pollution and provide a livelihood for people in the region.

Kersin Rock runs operations for LO3 Energy. The company also uses blockchain technology to build out energy microgrids in Brooklyn and elsewhere. Using LO3, local residents can install energy capturing devices like solar panels and feed energy back into the grid. Then using the LO3 app, others in the community can specify the kind of energy they want. In deploying the technology, LO3 is tapping into consumer preferences for green energy and connecting those customer up with the provider in their community who can give it to them.

Joe Madden, CEO of Xpansiv is also using blockchain to solve environmental problems and he may have struck gold - literally. Xpansiv is using the technology to track raw materials. The environmental cost of resource extraction varies depending on the context. But the price of commodities are never reflective of these costs and are determined by the purity (in the case of gold for example) or energy potential (in the case of oil). Madden wants to attach the environmental costs to commodities by using blockchain to store and label these commodities as they pass through the supply chain. Current infrastructure already captures much of the data needed. For example, data on the well pad is currently produced during the extraction process. So, in this case, it’s simply a matter of storing and carrying that data along with the commodity as it moves from the well to your gas tank. By pricing these costs into raw commodities Madden is bringing greater transparency to the process and letting buyers make informed decisions about what they’re buying.

Shared recognition of the threat will build cross sector collaboration

By bringing greater visibility to the true value and costs of materials we interact with, new technology offers us an opportunity to gain better insight into the invisible processes that produce goods and services. This added awareness helps us to see the sea we’re swimming in and hopefully reduce the toxic elements that threaten to destroy it. As we become more connected with our environmental impact we can adjust our behaviour. This will impact markets and favour ethical practices. But relying on market forces alone isn’t enough.

Brenna Berman, Managing Director of City Tech Collaborative, has worked with cities like Chicago, Toronto and Seattle to deploy sensors to measure water flows, traffic patterns and other patterns of urban life. Her company helps regions to use this data to make more informed plans around transit, water management and other infrastructure programs. Berman points out that cities are complex and contain high density housing, industrial areas, suburban areas and other topographies. In some corners of Chicago she reports that 132 levels of government have some form of oversight. To overcome these obstacles we need consortiums that include government, technology and other companies, nonprofits and an overall economic model that ensure sustainability.

Markets need to be governed within a framework that checks against the abuses that arise from entrenched interests that stifle disruptive innovation. Vulnerable sectors of the global population need to be protected against predatory or exploitative behaviour. Solving our ecological problems will require the involvement of all facets of society.

There are reasons to dread the future but there are signs of hope as new market dynamics, technology and consortiums emerge. We need to leverage all of these things. As Tzeporah Berman said in the event’s closing panel, change is coming by "design or default." It’s now up to us to determine whether we design our future or not. 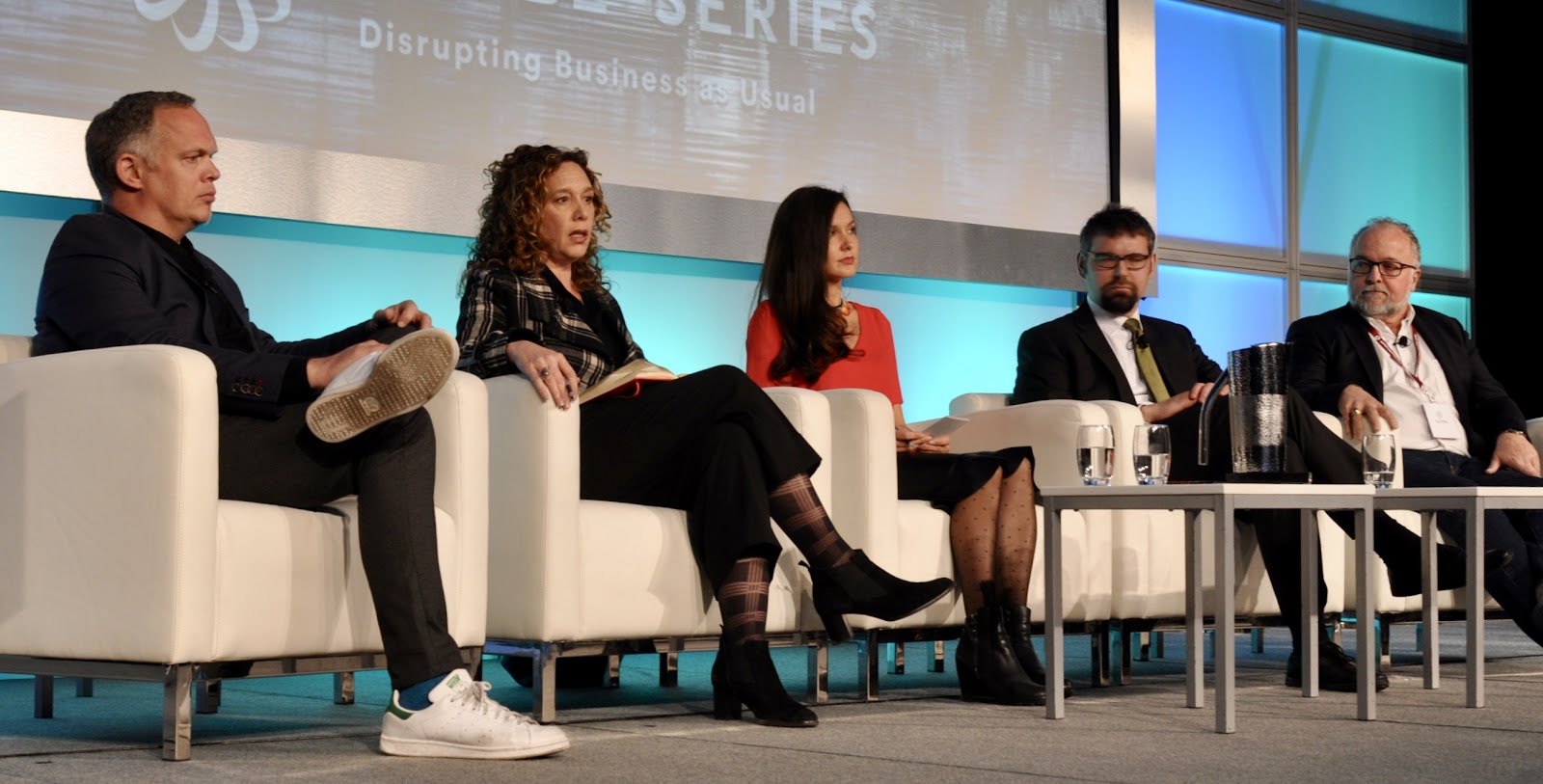