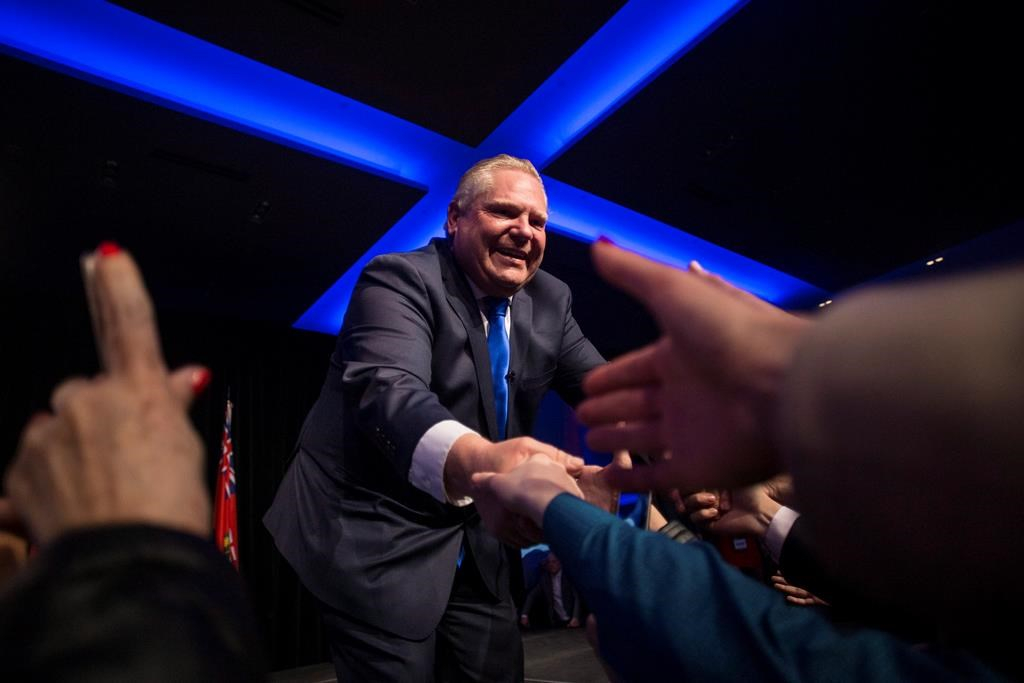 Doug Ford told a group of nearly 2,000 supporters that he plans to "take back this province" at his first major event since he was made leader of the Progressive Conservative party earlier this month.

Addressing a large and enthusiastic crowd at a rally in Toronto on Monday night, Ford said he believes he can build a majority government because Ontario voters are united in their dislike of Liberal Premier Kathleen Wynne.

Ford positioned his party as one that will attract voters who have previously been loyal Liberal or NDP supporters.

"It's not about being red or being blue, it's about turning this province around," he said.

His speech focused largely on the province's finances, which Ford said have been mismanaged by Wynne's government.

He characterized Monday's throne speech, which promised to make significant investments into health care, as both false and expensive promises.

"Today, Kathleen wrote a lot of cheques with the taxpayers' bank account," he said. "We all know the finances of this province, and I can tell you, all those cheques are going to end up bouncing."

Any mention of Wynne or of the provincial Liberals was met with loud boos and the occasional interjection from the crowd. "Boy, we got a rambunctious group tonight," Ford responded at one point.

He told supporters he wants to bring back jobs in the manufacturing sector, saying that Ontario used to be the "economic engine" of Canada, but that it's now a "have-not" province.

Ford repeated previous claims that his government will make Ontario more business-friendly to the U.S. and elsewhere.

He also vowed to take advantage of lucrative natural resources in northern Ontario. Proposed mining projects in the province's "Ring of Fire" will take place even "if I have to hop on a bulldozer myself," he said.

Once he cuts taxes and hydro rates and rolls back Liberal regulations, Ford said, Ontario will have "prosperity this province has never seen before."

Before his speech, Ford was joined onstage by Christine Elliott, Caroline Mulroney and Tanya Granic Allen, the three candidates he beat in the leadership race.

The Progressive Conservative leadership contest was triggered by the resignation of former leader Patrick Brown amid sexual harassment allegations, which he vehemently denies.

Many of Ford's supporters cited his personality and relatability as the foundation for their support.

"He's very friendly, and he cares about people," said Maria Lam, who said she has been a longtime supporter of Ford as a Toronto city councillor.

"He seems really sincere," agreed Susan Rowe, who said Ford was her first choice during the leadership race.

"I'm not a supporter of high taxes," said Andy Ramos, who works in the pharmaceutical industry.

He said U.S. President Donald Trump's diminished corporate tax rates have benefited American industries, adding that he would like to see a similar movement in Canada.

"We need to get rid of the carbon tax," said Miguel Gonzalez, who attended the rally with his mother, Erika Gonzalez.

Erika said "fiscal responsibility" is the most appealing part of Ford's platform. Gonzalez, who teaches students in grades one, two and three, also hopes the province will review the sexual education curriculum, which she calls "age-inappropriate."

Miguel said he originally supported Elliott, but said he was happy to switch his support to Ford when the leadership race was called.

"I'm happy to back whoever is going to take on Kathleen Wynne," he said.