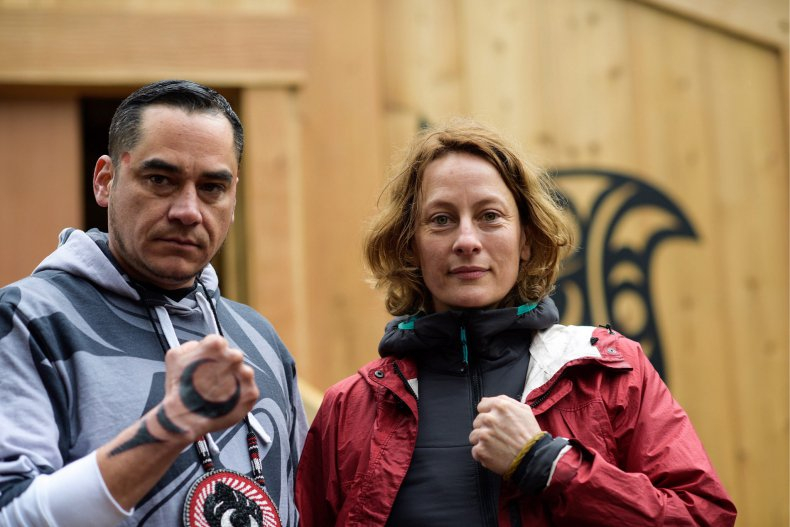 Tsleil-Waututh member Will George and Sarah Harmer on Burnaby Mountain on March 24, 2018. Photo by Protect the Inlet Media.
Previous story

With the Vancouver welcoming waves of artists for the Juno Awards, musicians Grimes and Sarah Harmer came to Burnaby to protest the Kinder Morgan pipeline expansion.

Hip Hop artist Ronnie Dean Harris was also there to show his support. He said his three-times great-grandfather was Chief Kwikwetlam, whom the City of Coquitlam was named for.

"I've been in this fight since the beginning," Harris told the National Observer. "To see people here of all different colours, backgrounds and viewpoints is really important."

"I feel it's my duty to protect my home, my daughter, my family, young people and future generations from the devastating effects of this project, particularly the climate impacts," he said.

A total of 57 were arrested Saturday blockading Texas-based Kinder Morgan's pipeline terminal in Burnaby B.C., bringing the total to 172 for the week. All were arrested for breaching a court injunction requiring a 5 metre no-go zone around the company's operations.

Saturday saw the largest number of arrests in one day since March 15, when the B.C. Supreme Court granted Kinder Morgan the injunction.

Earlier Saturday, 75 people had signed up as willing to risk arrest to stop the expansion of the $7.4-billion Trans Mountain pipeline, which would bring a seven-fold increase in oil tanker traffic to the coast.

About 100 other supporters braved the snowy, cold morning on Burnaby Mountain, carrying signs, singing and playing drums. About 30 of them blocked the gate to the construction site around noon, so that no construction workers or service vehicles could access the site. "Break free from fossil fuels," read one sign. "Water is life," read another. "Climate leaders don't build pipelines," said the sign held by some of the people blocking the gate.

The pipeline expansion was approved by Prime Minister Justin Trudeau's government in November 2016 and subsequently challenged in court by First Nations, the City of Burnaby, the City of Vancouver and the B.C. government.

Indigenous leaders, local citizens and environmentalists opposed to the project have been on Burnaby Mountain demonstrating all week. On Friday, Green Party leader Elizabeth May and Burnaby South MP Kennedy Stewart were arrested for crossing the injunction line and there have been dozens of other arrests.

Supporters say the pipeline expansion would fuel growth in the oil industry, create thousands of jobs and millions in new tax revenue, while opponents say it would put the coastline at risk and push Canada's climate change goals out of reach.

Kinder Morgan said in an emailed response that it respects the right to peacefully protest and that there are many ways to express opinions in a safe and lawful manner.

"Some individuals have been regularly attempting to obstruct, impede and prevent work crews and equipment from entering our operations facilities and work sites, which is why we pursued, and were granted, an injunction in BC Supreme Court," Media Relations for the Trans Mountain expansion said in the email. "The RCMP were notified today when the actions of protesters, which are in contravention of the court order, created safety issues for our workers, the surrounding area, and the protesters themselves. As always, the safety of the community, workers and our pipeline system is Trans Mountain’s top priority."

The B.C. government is formally opposed to the project, while the Alberta government has threatened B.C. with boycotts and a cutoff to its oil supply if doesn't stop trying to scuttle the pipeline. But densely populated parts of B.C., including the City of Vancouver and the City of Burnaby, have been opposed to the project for years due to the increased risk of an oil spill along the coast.

Prime Minister Trudeau told National Observer in an interview last month that the project was a compromise needed to proceed with a national climate change plan and has accused B.C. Premier John Horgan of trying to undermine that objective through his opposition.

In 2014, around 100 people protesting Kinder Morgan were arrested, many of them staying for hours in jail before being released, but 26 people arrested last week were allowed to walk away after processing.