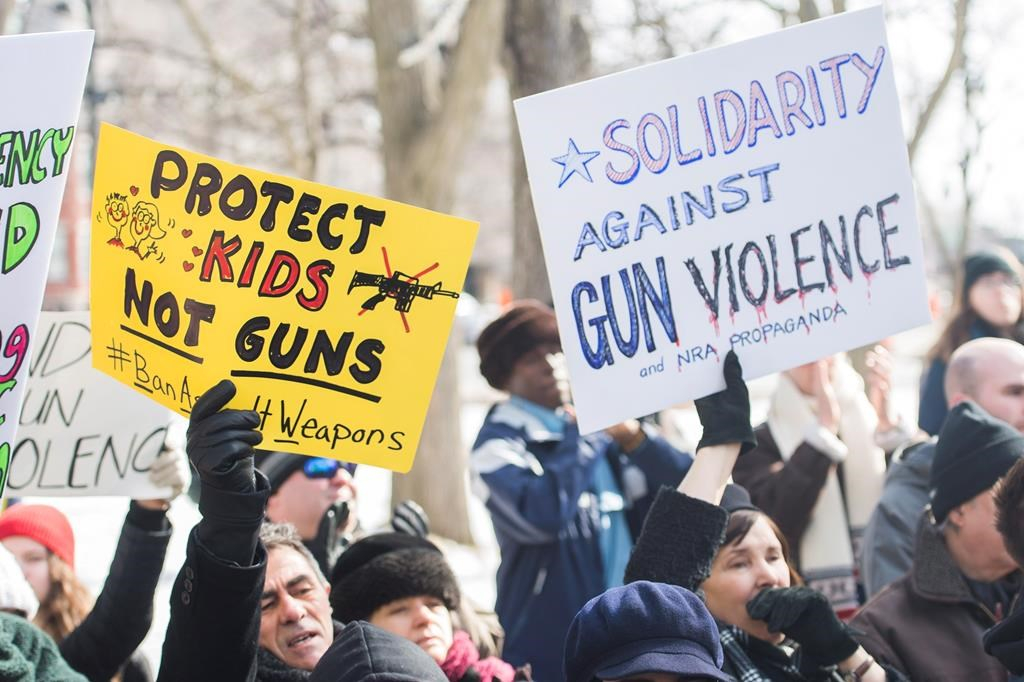 People hold up signs during a 'March of Our Lives' rally to show solidarity with the U.S. gun control movement in Montreal, on Saturday, March 24, 2018. Photo by The Canadian Press/Graham Hughes
Previous story

More than a dozen Canadian cities hosted marches Saturday to call for stricter gun control laws in both Canada and the United States, adding their voices to a global movement calling for change in the wake of a high school shooting that left 17 people dead in Parkland, Fla.

In both Montreal and Toronto, several hundred people joined local events in support of the massive March for Our Lives rally in Washington, D.C., which was organized by American students pushing for stricter gun-control legislation in the wake of the tragedy.

In one of Montreal's two marches, hundreds of protesters swayed together, singing to the tune of "Glory, Hallelujah," before setting off towards the city's U.S. Consulate.

They also seized the opportunity to ask Ottawa to ban assault weapons such as the AR-15 — the rifle allegedly used in the deadly Florida shooting on Feb. 14.

Ellen Gozansky Malka, a Montrealer now living in Parkland, told the crowd that two of her children were at the school during the shooting and saw things no child should see.

"Our children should never fear going to school, and they should never jump at the sound of a book falling on the floor," she said to applause.

A few blocks away, a slightly smaller event was organized by 11-year-old elementary school student Lexington Vickery, who led about 150 cheering classmates and supporters on a raucous march in support of American students.

"Its about making them feel better, and making them feel more supported and working to help them so they can have more courage to go to the government and get their gun legislation," the sixth-grader explained in an interview beforehand.

In Toronto, marchers carried signs protesting both gun violence in the United States and recent shootings that have plagued the city as they marched from a downtown square to the U.S. Consulate.

Joan Howard, whose son Kempton was shot to death in 2003, said that while Canada doesn't experience mass shootings on the same scale as the U.S., it's hardly immune.

She pointed to several high profile Toronto shootings, including one where two people were shot and killed outside of a bowling alley — one of the victims was allegedly targeted, and the other was described by police as a bystander.

"Look how much shooting we have of innocent people, (such as) those near the bowling alley," said Howard, who calls herself a member of the zero gun violence movement.

Bodil Geyer, who organized the march in Vancouver, said hundreds of people showed up despite a fake Facebook event showing the wrong time.

"We had a great turnout, all things considered," she said.

Geyer said the real event page was also peppered with pro-gun comments she believed were generated by bots or international users, because the grammar was often incorrect and some messages were threatening.

While the march was largely a show of support for the American gun control movement, Geyer said gang violence in Surrey also makes it a local issue.

All of the speakers at the Vancouver event were students, said Geyer, who represents both Democrats Abroad Vancouver and March On Vancouver.

"The crowd was amazing, they were awe-inspired, everyone was quite emotional listening to these kids," she said.

Tens of thousands of people were expected to attend the march in Washington, D.C., with smaller gatherings to take place in hundreds of cities across the world.

Rallies were also planned in most major Canadian cities, including St. John's, Ottawa and Calgary.

Melissa Hennig, a survivor of the Oct. 1 mass shooting at an outdoor concert in Las Vegas, joined about 150 people for a rally outside the Alberta legislature in Edmonton.

"While I don't know the ins and outs of assault rifles, I can tell you what it's like to be on the other end of one," the Edmonton-area woman told the crowd. She said it's difficult to talk about the "terror, confusion and panic.

— With files from Ben Singer and Nicole Thompson in Toronto, Rob Drinkwater in Edmonton and Amy Smart in Vancouver