The kids are coming: A tidal wave of teenage protest laps onto Washington, D.C. 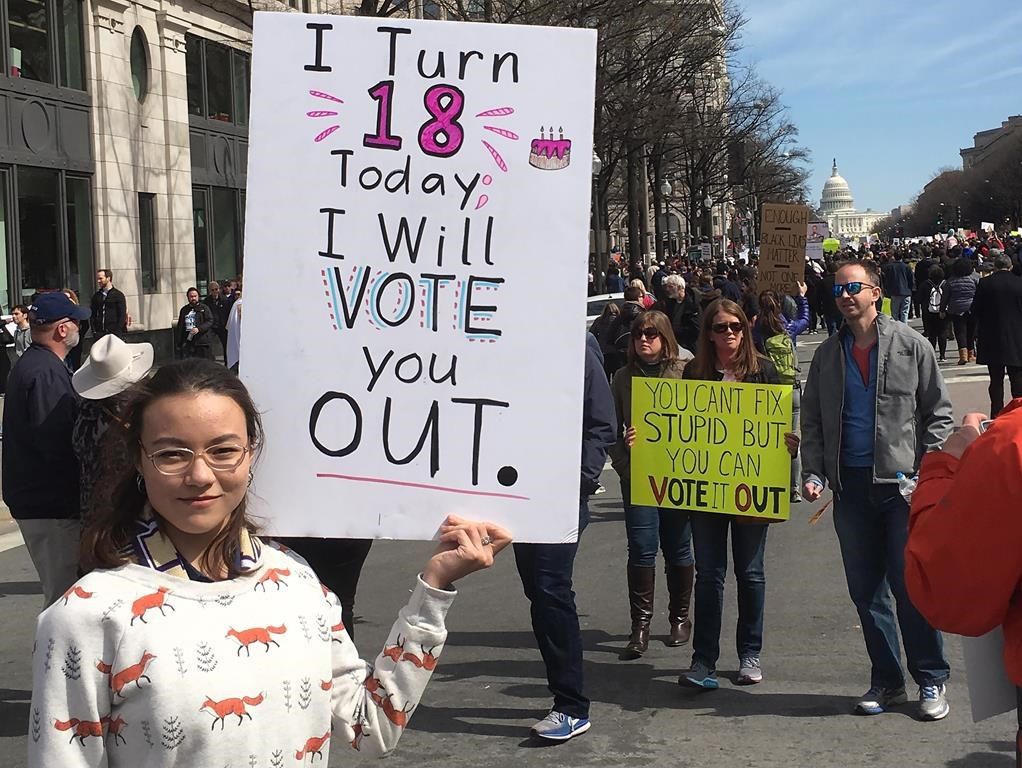 Nguyen is seen during the "March for Our Lives" protest for increased gun control, in Washington, D.C., on Saturday, March 24, 2018. Photo by The Canadian Press/Alexander Panetta
Previous story

Kat Schamel did not vote in the last American election, because her 18th birthday happened to fall on Nov. 9, 2016, one day after Donald Trump was elected president of the United States.

She promises she won't let it happen again.

"I'm going to be voting, next election, all the way through for the rest of my life," said the Utah native, who now lives in Toronto and is a dual American-Canadian citizen. Fittingly, she was standing outside the Canadian embassy to witness an American political phenomenon Saturday in Washington, D.C.

A generational wave lapped onto Washington, as hundreds of thousands of mostly young protesters washed across nearly two kilometres of Pennsylvania Avenue to demand changes to American gun laws.

Its size resembled the women's march more than a year earlier, with both serving as examples of a surge in liberal political energy since Trump's election. Demonstrators Saturday chanted, "Vote them out!" and held signs with slogans like I Can't Wait to Vote.

U.S. president James Garfield was shot to death just across the street from where Schamel stood. The sea of people rippled past Ford's Theater, where president Abraham Lincoln was shot. Even the Canadian embassy is where it is because Pennsylvania Avenue was refurbished in tribute to president John F. Kennedy after he was shot. Visiting protesters filled the hotel where president Ronald Reagan was shot.

Speaking from a podium, young people shared one tragic story after another, about losing siblings and friends in various mass shootings and the daily violence in inner cities. The scene was repeated in marches across the continent, including more than a dozen Canadian cities.

In New York, rock legend Paul McCartney talked about how he lost a friend by Central Park. Alluding to fellow Beatle John Lennon, McCartney told CNN: "One of my best friends was killed in gun violence. Right around here. So it's important to me."

Back in Washington, just outside the Canadian embassy, Nicole Rafanello recalled working with the man who shot Reagan. She's a forensic psychologist who treated John Hinckley, Jr.

Rafanello said she was personally affected by that work. On Saturday, she was carrying a more peaceful weapon: a clipboard.

She was among the volunteers registering young protesters to vote.

"I'm not here to take anybody's gun away. I have friends who have guns. My husband was in the military for 24 years," Rafanello said.

"My issue is getting it out of the wrong hands. It's too easy. People are not required to take any kind of gun-safety measures. They should have to get training. We have to get trained to drive a car."

There have actually been three modest gun reforms in recent days.

Schamel called that a good start.

Some people wandering in the crowd held up signs demanding an even more dramatic goal: repeal of the Second Amendment's constitutional right to bear arms. It seems a remote possibility in a country where smaller changes, with popular support, have stalled in a polity paralyzed by partisanship, pitting mostly rural voters against mostly urban ones.

Schamel has first-hand knowledge of those clashing cultures.

She grew up in Utah, with a father and grandfather as members of the National Rifle Association. Her grandpa sold guns on his front lawn. But she said her generation wants change.

"I grew up after Columbine," she said, referring to the 1999 school massacre that shocked the nation. "I used to go to school afraid for my life — as a Grade One student (in Utah). And that is completely unacceptable.

"Going to school in Canada now, seeing the difference, I've experienced what good gun control can do," she said. "We're still free in Canada. But we can go to school without being afraid for our lives."

While Schamel rode to D.C. on a bus from Toronto with the group Democrats Abroad, she said it doesn't matter how people vote, but for politicians to work for the general public.

Polls agree with her: There's strong support for modest gun reforms, but, among youth, weak attachment to any party. Young Americans aren't crazy about the Democrats, but their view of Republicans is worse and plummeting.

At the other end of Pennsylvania Avenue, Ly Nguyen was celebrating her 18th birthday.

She described advice offered by her ninth-grade health teacher: AR-15 rifles tend to miss high, so students should lay low during an attack. She said lockdown drills are getting scarier.

"My ... teacher kept a hammer in her desk, and said if a shooter came in she, a 60-year-old woman, would take the hammer and rush the guy ... (to) buy us a few seconds so that we could get books, whatever, throw them at the shooter, rush the shooter. 'No cowards' — that's what she told us."

Nguyen had another plan.

It was pasted on the sign she hoisted above the avenue: "I turn 18 today. I will vote you out."