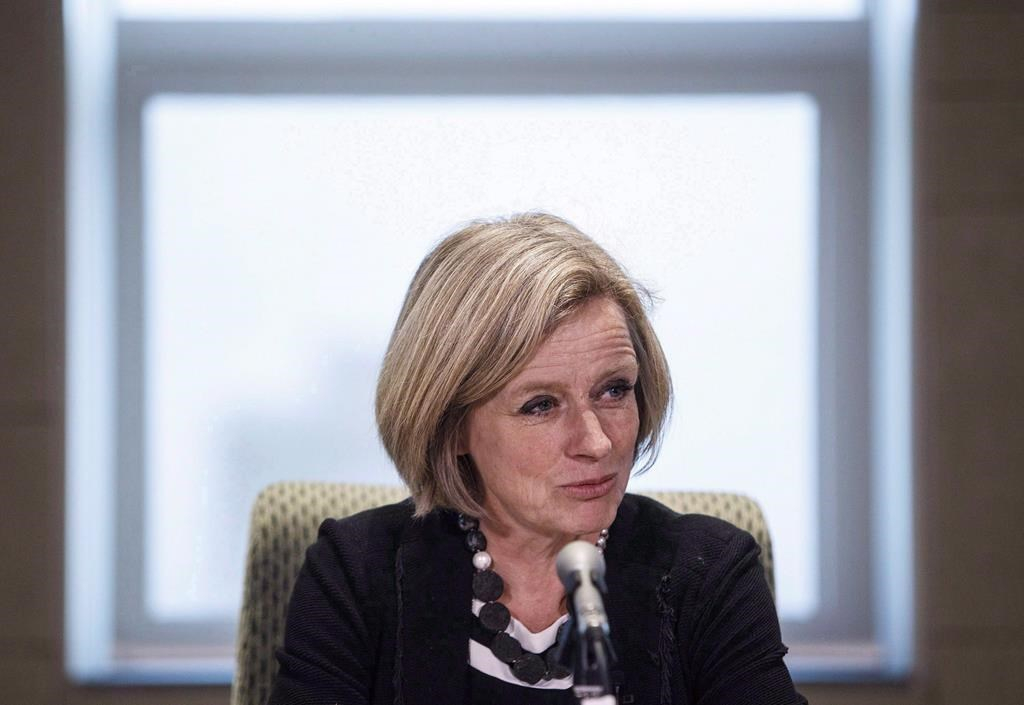 Alberta Premier Rachel Notley says a decision by the City of Burnaby, B.C., to take its fight over the Trans Mountain oil pipeline expansion to the Supreme Court is showboating.

Notley said the city doesn't have any hope of stopping the pipeline expansion in the courts.

"If I were a taxpayer in Burnaby, regardless of my position on the pipeline, I would be very irritated to see my mayor throwing good money after bad in terms of a legal fight which I'm sure every single lawyer who has given him advice has told him they don't have any hope of succeeding in," she said in Calgary Wednesday.

"He's going to showboat all he wants and people will judge them accordingly."

The Federal Court of Appeal dismissed a bid by Burnaby and the B.C. government to challenge a National Energy Board decision that cleared the way for Kinder Morgan Canada to bypass local bylaws during pipeline construction.

The expansion project would triple the amount of diluted bitumen from Alberta to Burnaby's port for shipment overseas.

The federal government approved the pipeline expansion in 2016, but the project faces significant opposition in B.C. Thousands of people have rallied in protest and the provincial government has raised concerns about the pipeline's possible environmental and economic impact.

Premier John Horgan is also seeking a legal ruling on whether his province can restrict increased amounts of oil from coming into B.C. while his government reviews oil-spill safety measures.

Notley said "willy-nilly" legal challenges — like Burnaby's leave to appeal to the Supreme Court — will not deter investors.

"I think the idea is that you hope to make investors uncertain but, at a certain point, investors have good lawyers too and they understand when they're real legal challenges and when they are showpieces."

Showboating huh? I call gaslighting on this campaigning premier

A recent survey that found

A recent survey that found that 18-20 % of Albertans actually side with B.C. should worry the premier....for two reasons: 1. They are likely on the side of history; climate change is here and moving rapidly; 40 more years of rip and ship, the planet may not survive.
2. They are likely NDP voters; nothing Notley does to push this pipeline, will bring oil and gas cons on side; it may affect her actual base, if she starts to do math like poor Jimmy Prentice.

Notley, we (apparently) hardly knew ya when you won your province. Tell us again why you are NDP? Following Trump's insular and narrow-minded approach to save all the coal jobs are you?

Notley is a traitor to the

Notley is a traitor to the planet and her party. I suspect many NDP voters will stay home at the next election not being able to bring themselves to vote for either of Alberta's leading politicians lost in the dark ages.

I see that Minister Carr …

I see that Minister Carr … offered less than substantive answers to senators’ questions, about the Trans Mountain Expansion(TMX)pipeline…says BC Senator Mobina Jaffer.
Senator…there are none !
Mr. PM ,the new assessment criteria , exist in your Omnibus Bill C 69 …AND recalling your offer to mediate this pipeline issue ,we should end up with a new , less risky ,National Interest plan to deliver more diluted bitumen(dilbit)to market. See attachments and know that earlier government studies have selected Port Simpson as their first choice for oil shipping terminal ….Vancouver area was chose 17th !
Minor spills will happen. What about an Exxon Valdes spill type in our harbour area or the international Salish Sea. That’s what concerns potentially impacted BC and Washington State communities !!
Verstehen ?