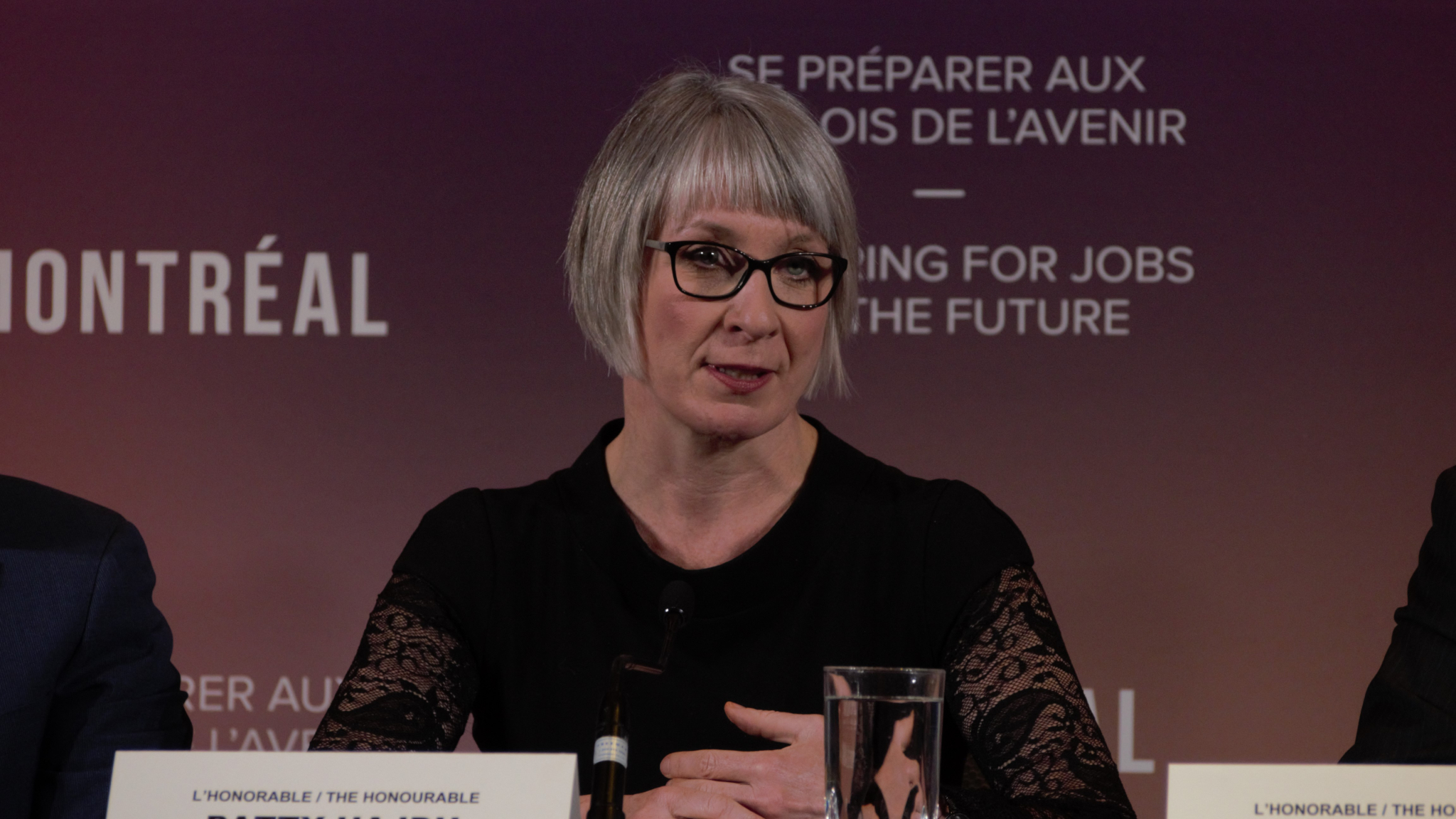 Employment Minister Patty Hajdu speaks at a press conference after a G7 ministerial meeting on the future of jobs in Montreal on March, 28. Photo by Clothilde Goujard
Previous story
Next story

Gender issues took centre stage as employment and innovation ministers of the G7 countries urged action on workplace violence and harassment, as well as closing the wage gap between men and women.

“One of the challenges we talked about was the endemic situation of harassment and systemic violence that women face regardless of the sectors in which they work, regardless of their countries of location,” said Minister of Employment Patty Hajdu at a press conference at a two-day meeting on the future of jobs​. “We talked about the multiple ways we can work together to really let everyone know that time is up and we cannot tolerate this if we expect women to prosper.”

Employment and innovation ministers from Canada, Italy, the European Union, France, Germany, Japan, the United Kingdom and the United States gathered in Montreal for the first G7 inter ministerial meeting to discuss the upcoming challenges in the labour market.

The meeting focused on the adaptation to major technological changes such as artificial intelligence, automation and the ways government can foster job creation and prepare their citizens for these transformations.

Canada is the host of the international meeting this year and Prime Minister Trudeau said he would put forward a progressive agenda to find “concrete solutions” to promote gender equality, clean energy and economy growth for everyone.

Minister Hajdu said that the conversation about gender-based harassment and violence in the workplace was well received and that Canada shared its experience and best practices including Bill C-65 that recently amended the labour code to address such incidents.

Ministers also looked into training workers for digital transformations in the economy and launched a digital forum on the future of work to share policies, programs and ideas.

“The challenges and opportunities that come with the digital transformation that we're all seeing across our economies brings with it a need to invest in digital skills and to transform our education system to ensure strong soft skills... thing like social and emotional intelligence, resilience and adaptability,” said Minister Hajdu.

The discussion also centered around innovation and the development of artificial intelligence (AI). The G7 ministers issued a statement agreeing on a common vision for AI technology and convened a conference on AI that will hosted by Canada this fall.

@MinWorkDev @PattyHajdu said that the conversation about gender-based harassment and violence in the workplace was well-received and that Canada shared its experience and best practices, including Bill C-65. #cdnpoli #futureofwork

Minister Hajdu also announced the creation of up to 500 paid student work placements in the sector over three years with specific support for female students.

The discussions gave little focus to the transition to the low-carbon economy and emerging clean energy jobs. Minister Bains said he had talked about financing green technology in his bilateral meeting and how innovation can fit into environmental targets.

“When we look at our ability to reduce our greenhouse gas emissions, technology is going to be a key driver and that was the context in which it came up,” he said during the press conference.

Asked about Canada’s leadership regarding the transition to the green economy, Minister Hajdu said that participants highlighted the need to offer adequate re-training opportunities for workers and have a strong social safety net in place.

“If (the transition) is sudden and rapid, it can create job loss or can create challenges for employees who’ve been in those industries for a long time and maybe have a challenge with either acquiring abilities to upscale or changing their skill set to evolve into new forms of work or new economies,” she said.

In a report in June 2017, the OECD estimated that by 2030, up to 20 million 20 jobs could be created worldwide in the clean energy sector, with 2.1 million jobs in wind energy production, 6.3 million in solar photovoltaic and 12 million in biofuels-related agriculture and industry. The international economic organization insisted on the need for countries to implement adequate professional training and educational program to favour a smooth transition for workers who move to green jobs.

Last year, at the G7 Energy Ministerial meeting in Italy, Natural Resource Minister Jim Carr had insisted on Canada’s commitment to expanding the clean energy economy and collaborate with its international partners to “meet this challenge and capture the emerging opportunities for economic growth and job creation."

On March 16, Minister Carr and Environment and Climate Change Minister Catherine McKenna launched the first G7 Clean Business Innovation Summit in Vancouver to encourage companies to discuss way to get involved in the green transition. Suggestions are meant to inform a later G7 ministerial meeting on climate change, oceans and clean jobs which will be held in October.

Time for change on harassment, including on Parliament Hill: minister