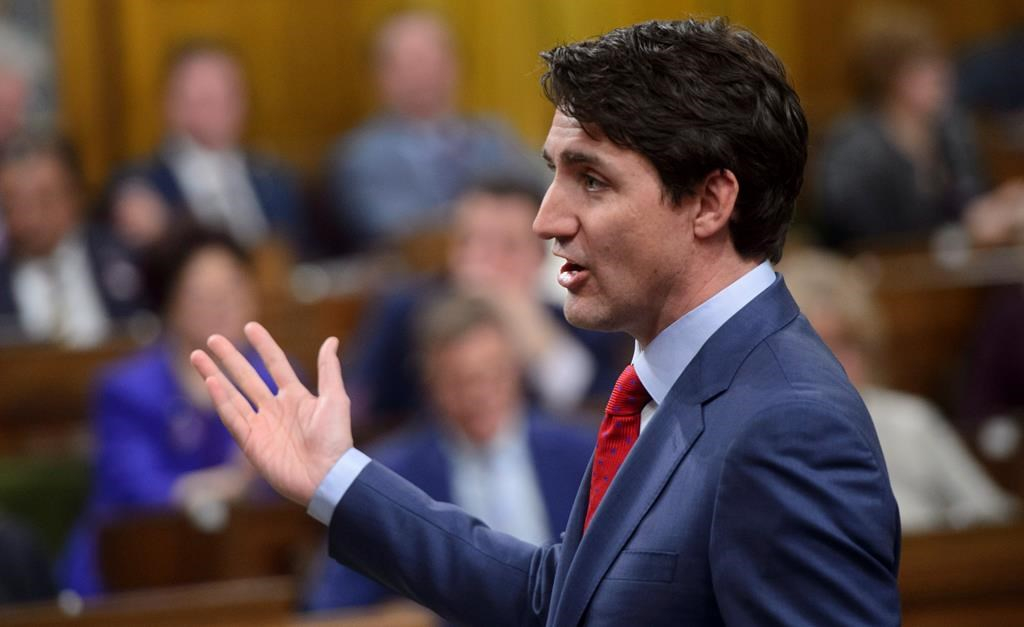 Justin Trudeau says he is disappointed with the Pope's decision not to apologize for the Catholic Church's role in residential schools and the trauma experienced by their students.

"This is something that we have to remember reconciliation is not just between government and Indigenous peoples," Trudeau said Wednesday on Parliament Hill. "It’s between non-Indigenous Canadians and Indigenous peoples as well, and we will keep working with communities, keep working with individuals on the path of reconciliation because we know that taking responsibility for past mistakes and asking forgiveness is something that is core to our values as Canadians."

A letter released Tuesday by the president of the Canadian Conference of Catholic Bishops says Pope Francis has not shied away from recognizing injustices faced by Indigenous peoples around the world, but that he can't personally apologize for residential schools.

An apology from the church was one of the 94 recommendations from the Truth and Reconciliation Commission and the prime minister asked the Pope to consider the gesture when he visited the Vatican last year.

The church has offered apologies in the past, including in 2010 to Irish victims of sexual abuse and in 2015 to Indigenous peoples in the Americas for the "grave sins" of colonialism.

Indigenous Relations Minister Carolyn Bennett has said the government will keep pushing for a papal apology. On Wednesday she also expressed disappointment and said she expects Catholics will continue to push their church as well because of how important an apology is to survivors.

"Sorrow is not enough," Bennett said Wednesday. "Sorrow is never enough. One has to take responsibility for the harm that was done, not only to the children that were taken but for the families left behind and what happened to them."

— Editor's note: This story was updated at 2:12 p.m. EST with comments from the Minister of Indigenous Relations.

PM to apologize Nov. 24 for residential schools in Newfoundland and Labrador

So here is our ‘self

So here is our ‘self-righteous’ Prime Minister chastising the pope as if he, Justin, has such a substantive record of ‘reconciliation’. His record consists of many lovely speeches to the UN, in Paris and to us ‘settlers’ about the importance of reconciliation on a nation-to-nation basis with Indigenous peoples. Yet, the Bureau of Indian Affairs spends more money on legal actions against Indigenous peoples’ efforts at fair and just reconciliation than any other Federal Dept. Trudeau completely sides with the Fossil Fuel Industry as they continue to wreck traditional territories of Indigenous Nations AND ‘blow us past’ our Paris Accord. A lotta talk .... where’s the walk? And the Pope has condemned Climate Change, urging substantive action by governments, while we are not going to come anywhere near our targets by 2030!

As usual, politics is a messy

As usual, politics is a messy business.

Fossil fuels: Trudeau did trash two of the three pipeline proposals and while he let tar sands projects in the pipeline through he has put in a much more rigorous approval process for future projects. (Not as much as I wanted, but it is dead wrong to say he always sides with the fossil fuel industry.)

Reconciliation: The intergenerational trauma and ill will between nations and communities will take decades to heal. Trudeau has taken concrete actions on the recommendations of the TRC like public apologies, the official exoneration of Tsilhqot'in chiefs, signing on to UNDRIP, and reorganizing the Indian and Northern Affairs department into a structure that doesn't presuppose that First Nations must be managed as children incapable of adult responsibility (which is a prerequisite for working on a lot of the other TRC recommendations). The current budget (see Feb 2018 articles) earmarked a lot of money into taking multiple actions on the TRC recommendations (we will see what happens and how). Even though we now frame this as a relationship between nations a lot of things are not under the jurisdiction of the federal government, e.g. education (teaching a more balanced version of history) is a provincial jurisdiction and every individual and community probably has some bridges to build and attitudes to change (cf. the public fallout of the Colten Boushie case). (I hope the First Nations affected by Kinder Morgan win their case. Trudeau's actions and talk supporting the TRC are changing public attitudes which should change how the Supreme Court will interpret extant laws.)

The Catholic Church is mostly talk and little action. The pope tells others to seek informed consent and treat people nicely and do good things for the planet, but stops short of taking any responsibility for the Church's own history when that could jeopardize the lawsuits against it. I understand the Anglican Church and United Church are walking their talk much better on acknowledging their involvement in residential schools and working towards reconciliation.

And Pope Francis is

And Pope Francis is disappointed by Trudeau's decision to not protect the environment. Me too!