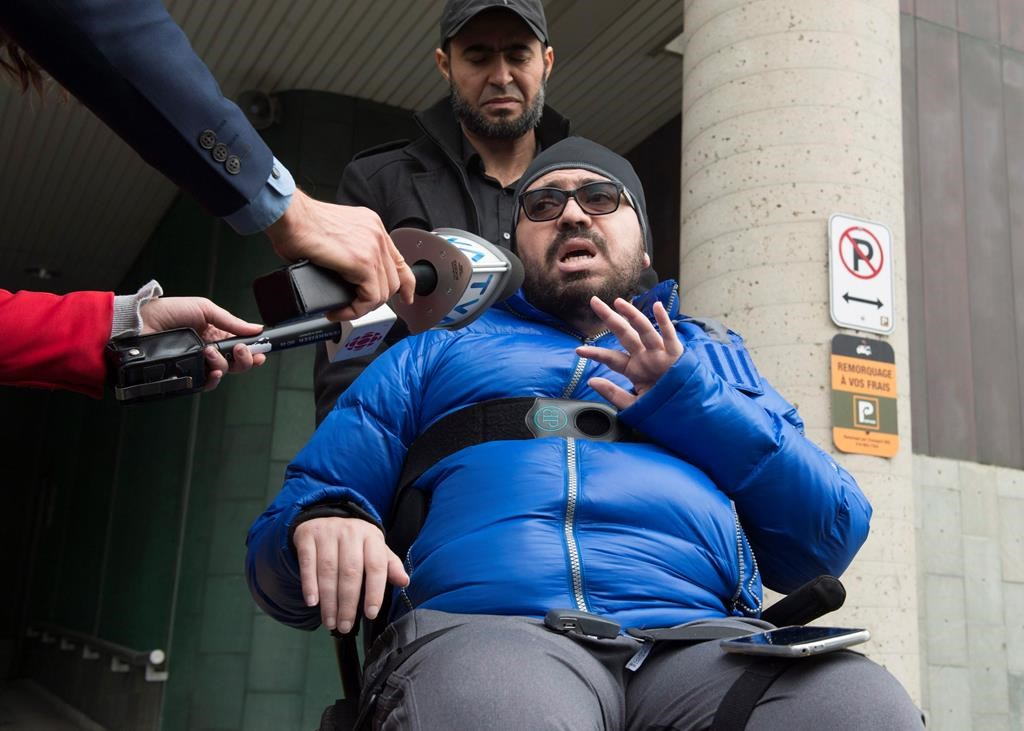 Aymen Derbali reacts to the guilty plea by Alexandre Bissonnette for the 2017 mosque shooting, on Wednesday, March 28, 2018, at the hall of justice in Quebec City. Photo by The Canadian Press/Jacques Boissinot
Previous story
Next story

The last time Aymen Derbali saw Alexandre Bissonnette before this week, the Quebec City mosque shooter was pointing a gun at his head.

The moments that followed 14 months ago turned Bissonnette into a murderer, and Derbali, who took seven bullets as he stood in the gunman's path, into a hero.

Derbali, who is now confined to a wheelchair, was in court Wednesday as a judge accepted Bissonnette’s guilty pleas to six charges of first-degree murder and six of attempted murder in connection with the attack on Jan. 29, 2017.

Derbali, who hadn't attended previous court proceedings, said he felt recognition but no rush of emotion when he saw Bissonnette again.

"For me, (I felt) normal," he said in an interview at the rehabilitation centre where he is undergoing therapy.

"At first look, I was very convinced it was the same face that I saw (that day) in front of me."

Derbali says he's glad Bissonnette decided to plead guilty because he believes it will help the victims to complete their mourning process.

But he questions the sincerity of the declaration the shooter read in court, especially Bissonnette's claim he is neither Islamophobic nor a terrorist.

"If it's not a terrorist act, it's an Islamophobic one," he said.

"He trained with weapons, he planned his gesture, he went to the mosque several times.’’

The shooter's actions, Derbali said, made it clear Bissonnette wanted to kill Muslims, and as many as possible.

"Is the fact of having spent a year in prison made him change his mind?" Derbali said.

While the emotions from the shooting are still raw for Quebec City's muslim community, Derbali says he's moving on.

His condition is slowly improving, and he's hoping to leave the rehabilitation centre sometime in the summer.

Eventually, he and his wife and three children will move into an adapted home purchased for him with the proceeds of an online fundraiser.

The financing campaign, launched by Muslim organization DawaNet, surpassed its $400,000 goal in February.

While he's moving on from the tragedy, Derbali says he's still not sure what to make of the request Bissonnette made in court for forgiveness.

For now, he says he needs more time to think about it.

"When I'm convinced that all this, he really regrets it, then I will really be able to (forgive)," he said.

"I don't have any resentment."