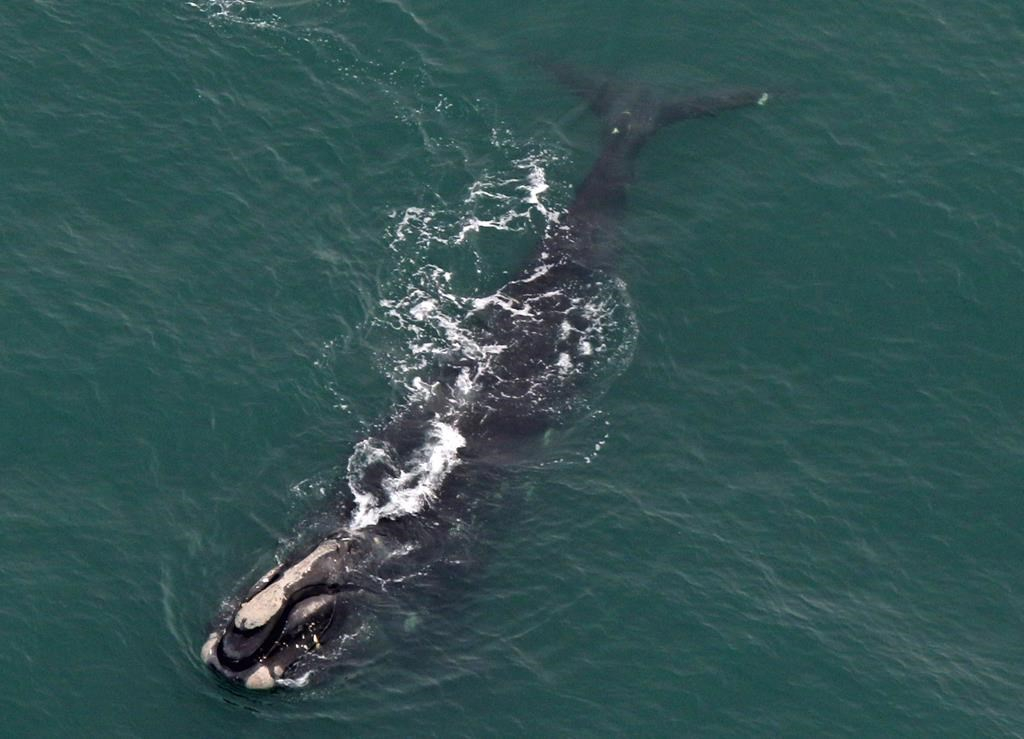 Most scientists have wrapped up their work scanning waters off the eastern U.S. coast for endangered North Atlantic right whales, capping off a dismal season that has seen an unprecedented number of deaths and no new calves added to the plummeting population.

They are developments that have dismayed marine biologists who have spent decades rebuilding a species once hunted to near extinction.

But, a team of researchers in Cape Cod Bay is holding out hope that right whale calves could still turn up in the nursery if, as they suspect, there is another calving ground that has so far eluded science.

"I'm kind of inclined to think we will see a calf or several here," Charles 'Stormy' Mayo of the Center for Coastal Studies said from his office in Provincetown, Mass. "My belief is that these right whales may be calving in a slightly different location than the areas that we have known them to calve in before."

Mayo cautions that there is yet no science backing up the suspicion, but says three right whale calves were spotted in their usual calving grounds off Georgia and Florida last year. A short time later, five appeared in Cape Cod Bay, suggesting there is another area where females could be having their babies.

His crews will continue surveying the bay inside the hook of land, where many of the world's remaining 450 whales tend to gather in May before heading north to Canadian waters to feed. He said 109 individuals have already turned up in the area, slightly ahead of schedule.

Mayo and other marine mammal experts say the whales could be altering their calving habitats, much like they did with their feeding grounds.

Researchers only recently discovered that in addition to the Bay of Fundy, right whales were going to the Gulf of St. Lawrence to feed. They identified the habitat after realizing about five years ago that known whales weren't turning up in the bay as expected. They turned their attention to the Gulf and found clusters of the whales in the area.

"We know they have plastic pattern of habitat selection and we know what happened in the Gulf of St. Lawrence," Mayo said. "The same may well apply to the calving areas ... I still hold out hope, but as of right now the story is grim."

If none appears, it would be the first time since the 1980s that no calves have been seen by crews doing aerial and water-based surveys — an ominous development for the species that saw 18 killed in U.S. and Canadian waters in the last year. It's suspected that many of them died after getting ensnared in fishing gear or hit by large vessels.

Marine mammal experts have warned that this could be the beginning of the end for the whales who were once favoured by hunters who dubbed them the right whales because of their slow-moving, surface-skimming behaviour that made them easy prey.

Some modelling has shown that if the mortalities continue, the species could go extinct by 2040.

Clay George, a biologist with Georgia's Department of Natural Resources, said it's unlikely any calves will be seen this year but adds that the number of right whale babies born each year can vary dramatically.

In 2000, one calf was spotted while 31 calves were seen the following year.

But, he says what's alarming is that the average number of births over the last decade has dropped by half while the mortalities peaked this year.

"In the 2000s we were seeing 24 calves born a year on average. Including this (zero birth) year, we've been seeing about 12 on average since 2011," said George, whose aerial surveys of the calving grounds ended last month.

"Anything above (20 births), the population will grow. Anything below that and the population's going to start to decline because death starts to outpace the births and that's the situation right whales are in now."

Researchers are trying to determine whether there are wider, ecosystem changes that may be influencing the ability of the remaining 100 breeding females to get pregnant.

Chronic entanglements and noise may also cause them stress, which could be linked to lower reproduction rates.

The whales, which are thought to have the same average lifespan as humans, used to give birth every three years. It has now dropped to about every seven to 10 years.

By The Canadian Press | News, Politics | January 23rd 2018
State Of The Animal

By Patrick Whittle | News, US News, Politics | December 12th 2017
State Of The Animal