Martin Luther King: 50 years later, his mission not quite accomplished 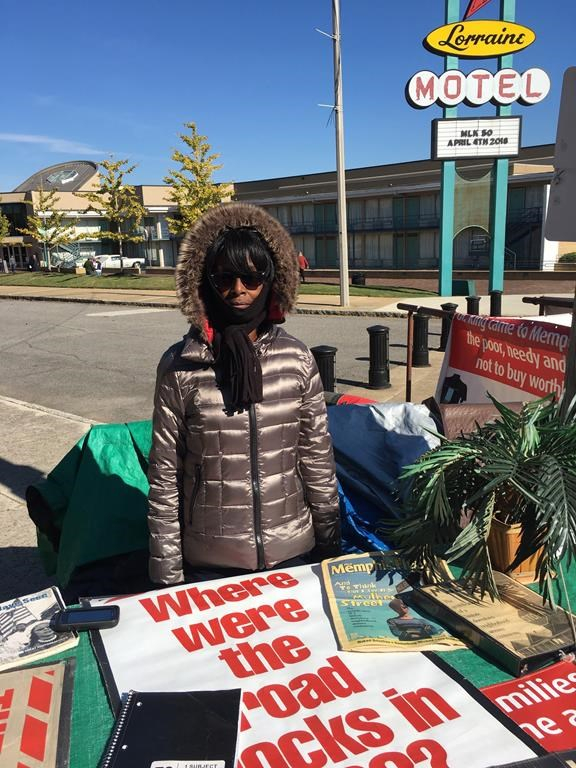 Jacqueline Smith, seen here on Friday, Nov. 10, 2017, outside the Lorraine Motel in Memphis, where Martin Luther King Jr. was killed by a sniper 50 years ago on April 4, 1968. File photo by The Canadian Press/Alex Panetta
Previous story
Next story

Just across the street from the scene where Martin Luther King Jr. was murdered 50 years ago Wednesday, a woman has stood vigil, day after day, for several decades, protesting against the site becoming a museum.

Jacqueline Smith was the last resident of the Lorraine Motel in Memphis until she was evicted, carried out sobbing in 1988 by four sheriff's deputies who were clearing the space for a civil-rights memorial.

She vowed to camp out on the sidewalk, and has. She stands just off the phantom path of that fatal bullet, fired from a rooming house behind the motel where a sniper lurked on April 4, 1968.

"Put an end to gentrification in Memphis today," says one of her protest signs, which adds: "My aim is to relocate (the museum) ... and establish the Lorraine Motel as a living testimony to Dr. King's dream — shelter for the homeless, assistance for the needy."

The scene conveys the tension in commemorating King's legacy.

On the one hand, there's an impulse to celebrate the man's achievements — global icon, leader of the Montgomery bus strike, marcher in Selma for voting rights, slayer of Jim Crow.

On the other hand is the drive to continue his mission — beset by unfulfilled dreams in economics, education, justice.

Anniversary events in Memphis are highlighting why King was in town: a workers' strike. Sanitation crews were fighting low pay, discriminatory treatment and unsafe equipment that crushed two colleagues to death.

So while one sentence from King's final sermon remains etched into our cultural pantheon, the one about him seeing the promised land, time has obscured the central message of that Memphis speech.

He had unfinished business.

In that speech, King urged a boycott of Coca-Cola, Sealtest milk, and Wonder Bread, part of a campaign to change discriminatory hiring. King opined that American blacks were poor individually, but together held the 10th-highest GDP on Earth, and should use that power.

"We just need to go around to these stores, and to these massive industries ... and say, 'God sent us by here to say to you that you're not treating His children right.'.. And our agenda calls for withdrawing economic support from you (unless you change)."

When he died, King was preparing a return to the scene of his most famous moment, with plans for a Poor People's Campaign where black, white, Hispanic and Indigenous protesters would camp out on the National Mall in Washington, D.C.

That everyone recalls his 1963 speech on the mall, "I Have A Dream," while his final project languishes in comparative obscurity, is why African-American academic Cornel West bemoans the "Santa Claus-ification" of King, recalled by history as a jolly figure who just wanted kids gathered around the table of brotherhood.

His public image certainly improved posthumously. In life, Gallup polls found mixed support for King, with disapproval as high as 63 per cent. By 2000, he was Gallup's second-most admired person of the 20th century — after Mother Teresa.

"Unfortunately this is what happens with history," said Martin O'Hanlon, president of CWA Canada, the Canadian media union.

"Things are simplified. One person did one thing. It's never that simple... (People) have put Martin Luther King into a bit of a box... After he was killed, his legacy was sanitized... People have to ask, 'Why was he shot down on that day in Memphis?' He was there at a strike."

People wrestle with other parts of his legacy.

African-American writer Mychal Denzel Smith, writing in The Atlantic magazine, recalled King's moonlighting as a magazine advice columnist, and how he was less than helpful to women who wrote about spousal mistreatment.

He also expressed resentment at how people use King today, as a foil, to negatively compare other black people. His piece carried the headline, "Is King all that we are allowed to become? Americans ... use (his) memory more to chide black youth than to inspire them."

In the explosion of anger following his death, African-Americans questioned his peaceful resistance: "Non-violence was murdered with Martin Luther King," read one sign at a protest at Washington's Howard University.

People rioted, looted, burned buildings in 120 cities. The effects remain engraved in some. Clay Risen, author of a book on that week's events, "Nation On Fire," says there are still empty lots in Chicago and Baltimore in the place of charred buildings.

Not in Washington. A government town, suited to the service-based economy, it has bounced back. Now luxury condos and tapas joints proliferate in places that burned in 1968, then were avoided by whites as no-go zones for years thereafter.

Now it's longtime black residents being nudged away, priced out by wealthier white homebuyers.

Therein lie the unreached parts of the promised land in King's final speech. Just consider these data points, including several from headlines of recent days.

— American cities are still largely separated by race. It's especially dramatic in schools, where de-facto segregation of black children from white has increased markedly since the 1980s.

— The wealth gap between blacks and whites is growing. It affects black men, especially. A new project by Stanford and Harvard economists finds even black men born into rich families face a surprisingly high poverty risk.

—On the labour front, the last cause of King's life, unionization rates are barely one-third what they were a few decades ago, at just 6.5 per cent in the private sector.

There have been advances.

African-American unemployment is around a record-low level 6.9 per cent, partly ascribed to labour-force participation decreases. More African-Americans than ever sit in this U.S. Congress, following the election of a black president.

Jesse Jackson, who was with King the night he died, summarizes the state of the struggle.

"That's the next phase of our struggle. Beyond racial freedom."