Will Vancouver's next mayor be Her Worship Shauna Sylvester?

Shauna Sylvester has announced her official bid for Vancouver Mayor as an independent candidate in one of the most unpredictable elections Vancouver has ever seen.

So far, she’s the first candidate in the race representing the centre-left of the political spectrum. Incumbent Mayor Gregor Robertson has announced he will not be pursuing a fourth term, and Vision Vancouver may not be nominating a leader at all in the October 2018 election race.

Running against her is former federal Conservative MP Wai Young, under the newly formed Coalition Vancouver. The Non Partisan Association of Vancouver (NPA) will also be announcing a Mayoral candidate.

Adriane Carr, leader of the Green Party of Vancouver has also expressed her interest in vying for the role, but will confirm after doing an assessment of her public support, so as not to risk losing her seat as the sole Green member on Vancouver's City Council.

Sylvester told National Observer that she's “committed to not splitting the progressive vote in this city. If Adriane believes she can unify this city, has data to show it, and we sit down and I feel like the issues I stand for, Adriane fully represents, then I would step back.” Though withdrawing her Mayoral bid remains an option for her, she holds reservations about Adriane running under the Green banner, “I think that would suggest that she can’t unify this city if she’s only going to run as a Green candidate.” 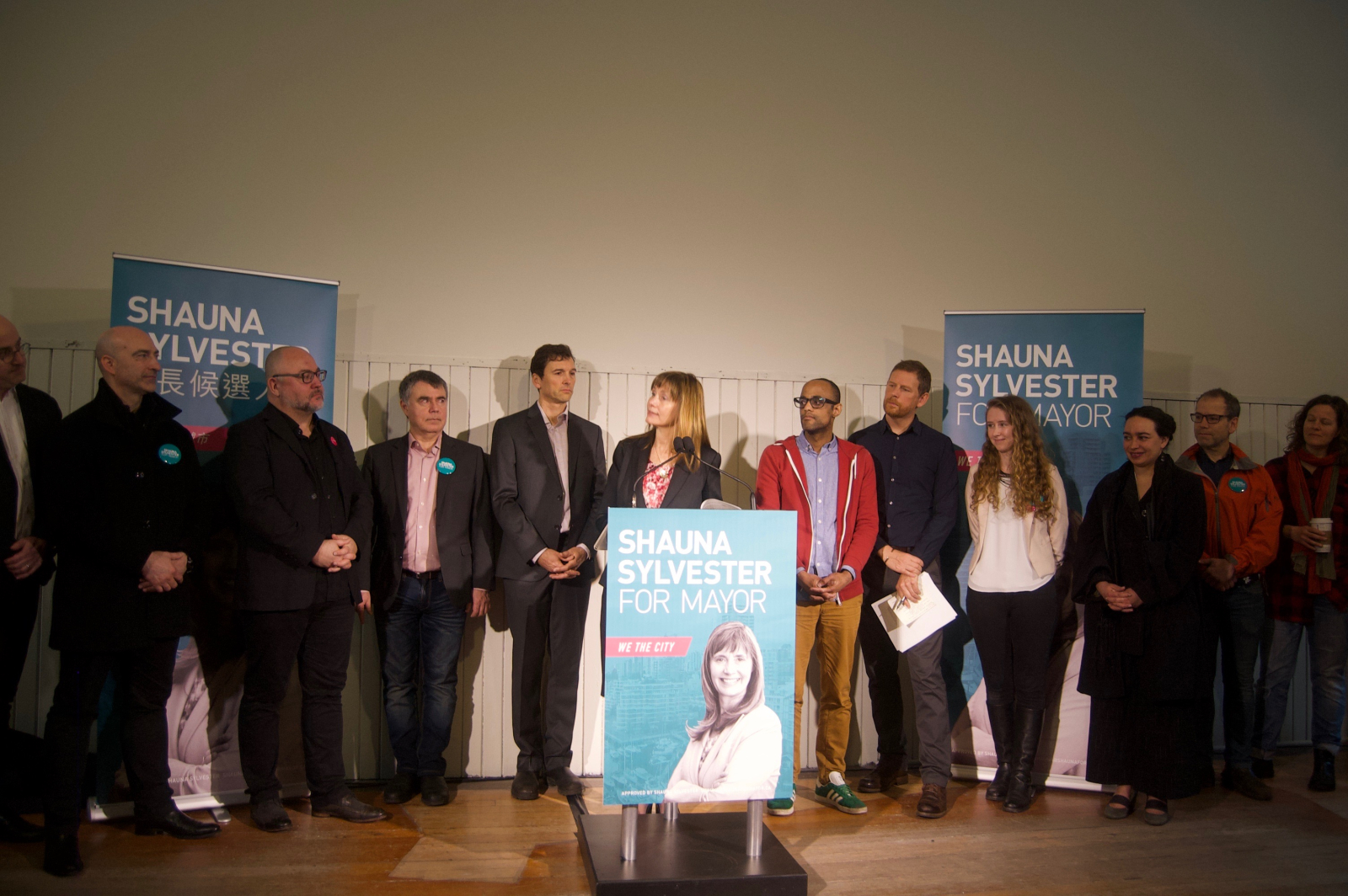 Shauna Sylvester surrounded by supporters as she announces her bid for Vancouver Mayor. Photo taken by Dylan Sunshine Waisman.

So, who is Shauna Sylvester?

Well, first thing to know, her resumé is full.

She is the director of Simon Fraser University’s Centre for Dialogue, a hub for conversations about civic engagement, climate solutions, intercultural dialogue and other issues. She sits on the boards of Vancity Credit Union, and Mountain Equipment Cooperative.

She has provided policy advice to governments about climate change, human security and other issues, as well as writing and editing publications on foreign policy and social and environmental issues. She’s also the founding executive director of Renewable Cities and Carbon Talks, which help cities transition to 100% renewable energy and low-carbon economies.

Sylvester says she's “committed to not splitting the progressive vote in this city." #vanpoli

Her Stance on Climate Change, Energy, and Pipelines

Sylvester’s organization Renewable Cities, has worked with the city of Vancouver since 2015 to help it transition to 100% renewable energy for its heating, cooling, and transportation sectors by 2050.

“For climate change in particular I think we’re on the right track in terms of addressing the issue of transitioning to a low energy fuels, I think we have efficiency work to do, we have work to do on the environment, we’ve got to look at our land use planning in relation to transportation.”

Like Vision Vancouver and the Green Party of Vancouver, Sylvester wants to see the Trans Mountain pipeline expansion stopped. “I will be standing against Kinder Morgan, I don’t think it’s in the best economic interest of our city, I don’t think it makes sense to have tankers going through our city, we have a tourist economy… and that development is going to threaten it.”

Unlike some of B.C.’s other political leaders, Sylvester prefers dialogue to front-lines activism. “I’m not somebody who’s going to be involved in civil disobedience, that’s not who I am. I will always sit down and talk, and I have invited many, many times Kinder Morgan to come to the table at Simon Fraser University to have conversations."

Her Background with Vision Vancouver

Sylvester has been on the board of Vision Vancouver, and has donated hundreds of dollars to each of its past three electoral campaigns. “I have not been involved with vision for a number of years, but vision has done a number of things that I do respect. I think what we need to do though now is really move beyond what has become a very fragmented city… I’m focused on building a city where everyone belongs, because we need everybody here it’s not a place that’s just for the rich, or just a place to park your money.”

She commented on Gregor Robertson’s promises to end Vancouver’s street homelessness by 2015. “While I appreciated that bold aspirational promise, I’m not going to make promises like that. I’m very much a pragmatist. I am going to put a great deal of energy and focus to ensuring people are not living on the street.”

Despite having a history with the Vancouver Vision party, Sylvester believes “what the citizens of Vancouver want is an independent candidate” to “move beyond what has become a very fragmented city.”

When asked about Vancouver’s empty homes and foreign speculators taxes, Sylvester said “I certainly support the empty homes tax, I think that’s critical. I don’t know about the other taxes that the provisional government is putting forward right now, I’m going to look at those a lot more closely.”

She said her experience sitting on the board of the B.C. Assessment Authority bolsters her credentials, and she “know[s] our property tax system well.”

Her Stance on Transportation

She wants the Millennium line Broadway extension project to take the Skytrain all the way to the UBC. “I’ve worked on that issue for many years… I’m happy to see funding coming into play and that the mayor’s plan is moving forward, but I don’t think it goes far enough.

When we look at the Broadway corridor, once we have those drillers in the ground, it has to go to UBC… that’s a very important community to be serving.”

Her Stance on Vancouver’s Opioid crisis

She tearfully spoke about the Fentanyl-related death of community leader Michael Stone in Vancouver last year. She emphasized that Vancouver doesn’t have an opioid crisis, but an opioid poisoning crisis. “The government has come forward to do a pilot project to get safe drugs into the hands of people on the streets. I don’t think that pilot project is big enough, I think it needs to be much bigger to have the kind of impact we need.”

while the article has

while the article has substance, the headline doesn’t suit. There is no explanation of ‘her worship’. I imagine Shauna as someone who promotes dialogue would not want to be put on a pedestal. To me as a woman it sounds like a slapstick compliment, which makes it slightly insulting, as if someone is jealous. If this is meant to be an opinion piece say so and then give an opinion in the article not by confusing implication in the headline.

I just took it to be the

I just took it to be the formal title for a mayor, like His Worship Gregor Robertson, Her Worship Lisa Helps or His Worship Naheed Nenshi.