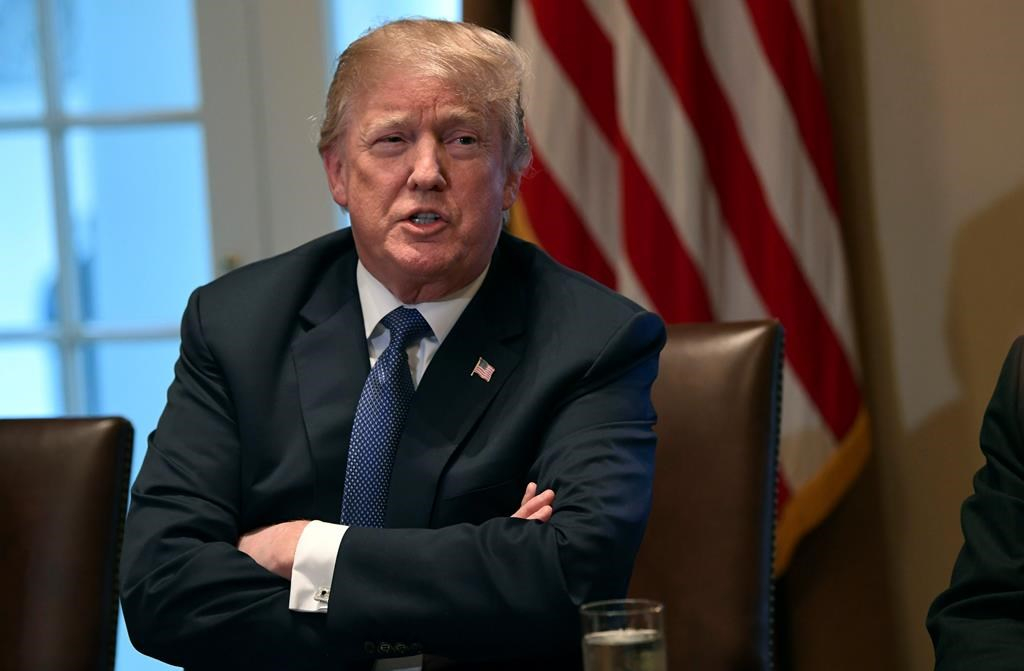 President Donald Trump speaks in the Cabinet Room of the White House in Washington, on Monday, April 9, 2018, at the start of a meeting with military leaders. Photo by The Associated Press/Susan Walsh
Previous story
Next story

The president is fuming after a police raid into his inner sanctum. Arms crossed, Donald Trump pointedly refused to rule out firing the special counsel now inching into his business ties.

Trump's spokeswoman said the president has received legal advice that he would be allowed to fire Mueller if he wanted, which flies in the face of the common wisdom that someone at the Department of Justice would have to do the deed.

That's because the rules that protect a special counsel from unilateral presidential action were written in a 1999 federal regulation, but were not actually enshrined in law.

A spokeswoman for Trump was unequivocal when asked whether he is allowed to fire Mueller.

"He has the power to do so," Sarah Sanders said Tuesday.

"We've been advised that the president certainly has the power to make that decision. ... I don't have any further announcements."

The most recent source of Trump's ire is federal agents raiding a hotel to search the belongings of his longtime confidant Michael Cohen.

More than a personal lawyer, Cohen was a right-hand man who did everything from preparing foreign business deals, to arranging hush-money payments to mistresses, to berating rivals and troublemaking reporters.

He referred to his own role by tweeting a news story this week about himself, headlined "Trump's Fixer." Cohen added his own message: "I will always protect our (president)."

"That would be the beginning of the end of his presidency," said Sen. Lindsey Graham.

"You can't fire the special counsel. You just can't," his former transition manager, Chris Christie, told ABC on Tuesday. Chuck Grassley, who heads the Senate's justice committee, told Fox: "It would be suicide for the president to want to talk about firing Mueller."

Louisiana Republican John Kennedy said: "I think the president's too smart to fire Mr. Mueller. If he did, it wouldn't end the investigation."

But few lawmakers from the president's party are willing to take the extra precaution of passing a law that protects the special counsel against unilateral dismissal, a move that would surely be controversial with his voters.

For now, most are talking like Senate leader Mitch McConnell, who said it's a non-issue because Mueller should be allowed to finish his job, and there's no indication the president will fire him.

Polls point to the political reason to leave Mueller alone.

While most Republicans might dislike the probe, and a sizable percentage want it scrapped, many Republicans want Mueller left untouched, and does a clear majority of Democrats, Independents and the American public at large.

With midterm elections just months away, a survey by the Republican-friendly firm Rasmussen finds that a mere 16 per cent of likely U.S. voters believe Trump should fire Mueller, while 55 per cent disagree, and 29 per cent are undecided. Hundreds of protests are already organized for U.S. cities and towns on the day of any Mueller firing.

But the president has more than political pressure on his mind. The probe is rapidly heating up, engulfing people close to the president, and scorching the ground around him.

In the wake of the latest raid, Trump expressed anger at the expanding investigation and at federal officials, especially Jeff Sessions and Rod Rosenstein, who've let it grow.

On Tuesday, he called it a witch hunt, tweeting that in the wake of the raid on Cohen, "attorney-client privilege is dead!"

One attorney who happens to be married to Trump aide Kellyanne Conway, George Conway, responded to the president's tweet by posting the federal guidelines that allow search warrants for attorneys' offices, in certain cases such as when they have advance knowledge of a crime.

A half-dozen conditions need to be met for such searches to happen.

The requirements include: attempting to find alternatives to a warrant, getting authorization from the attorney general or his assistant, consulting with the criminal division at the Department of Justice, and screening seized material for privileged documents and keeping them away from the principal investigators.

Mueller did the appropriate thing by referring the case to federal authorities in the southern district of New York, said Mimi Rocah, who spent 16 years as assistant U.S. attorney in that district.

Such a search is never done lightly, Rocah said.

One thing she can't tell is whether Mueller is also sharing evidence with state-level investigators to protect his investigation, and allow it to shift to New York state should he be fired.

"It's a great question," she said in an email.

"I do not have a simple answer (to it) because it depends on a lot of different details that we don't know yet... Certain rules and procedures ... need to be followed and we just don't know enough yet. But it is certainly a possibility."

What happens if Trump fires special counsel Mueller: it starts with 500 protests