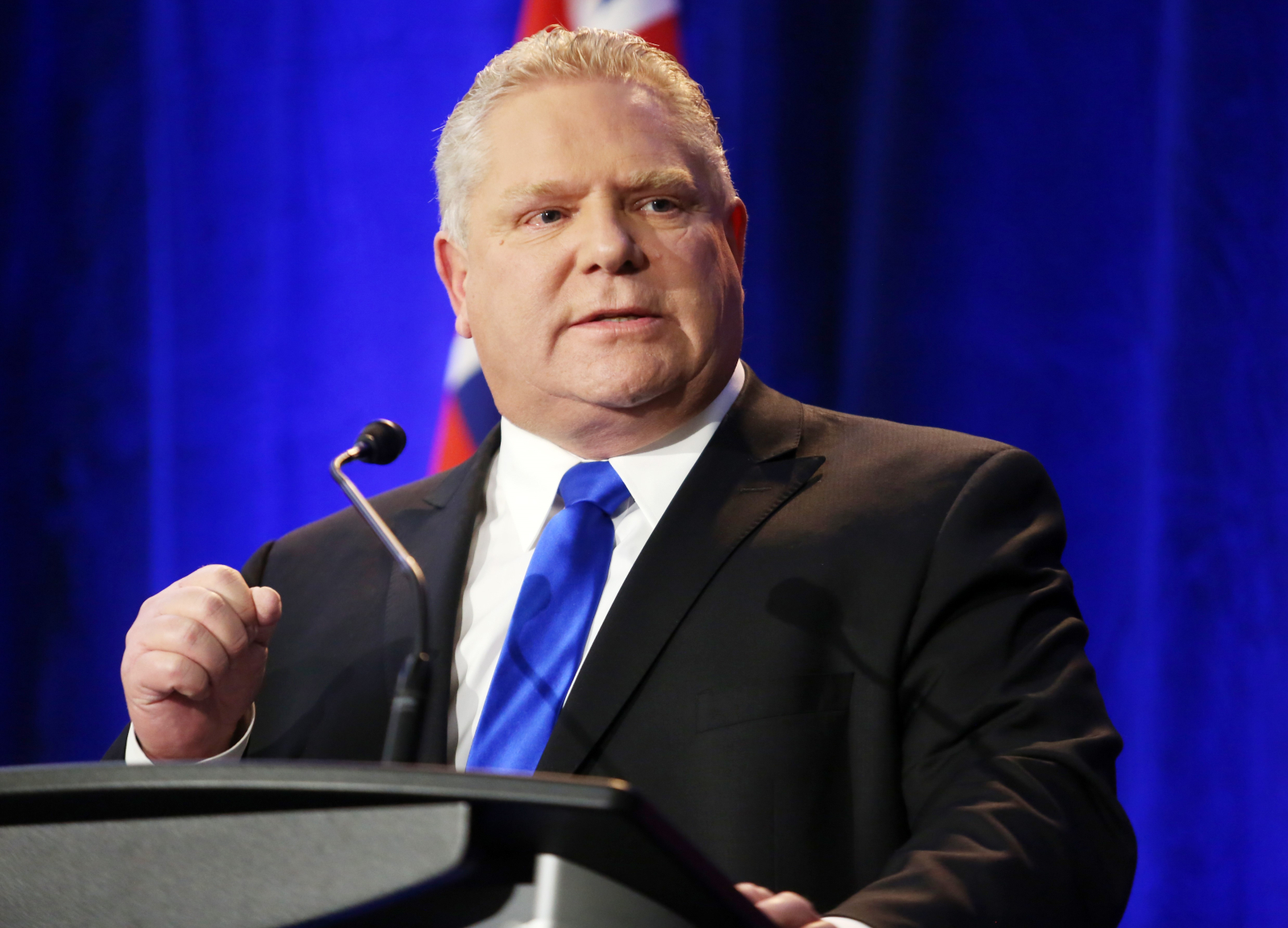 Doug Ford pledged Thursday to fire the board of Hydro One, a partially private company.

Speaking at the Hilton Toronto, the leader of the Progressive Conservative party said "real people" in Ontario have been hurt by the Liberal government, and his plan to change that includes overhauling the electricity service provider.

He added his first move as premier — if he is elected June 7 — will be to fire the board, but he declined to offer details of how he would do that.

“We will use every tool at the disposal of the Ontario government to remove the $6 million man and the entire board of Hydro One," Ford said.

The "$6 million man" refers to Hydro One chief executive officer Mayo Schmidt, whose compensation added up to $6.2 million in 2017.

In a statement issued Thursday, Hydro One said, "We will not engage in politics, however our customers deserve the facts."

Earlier this year, the company added, it was decided only $0.02 cents of customers' monthly bills would go to the CEO's compensation. Most of his compensation would be covered by shareholders.

Ford didn't answer a question about how firing the board would lower Ontarians' hydro rates, saying, "I can tell you we’re going to achieve that. And over the period of the next 55, 56 days we’re going to roll out how we’re going to start putting money back into the taxpayers’ pocket instead of the government’s pocket."

Ford's estimate of a $1,000-a-year bill increase over the past 15 years was different from numbers issued by the Progressive Conservative party on Thursday. According to the press release, "Under the Liberals’ watch, since 2003, Ontario residents have seen their hydro bills triple, adding up to more than $1,000 a year for the average Ontario family."

According to the Consumer Price Index, Ontarians on average paid 18.7 per cent less for electricity over the year, between February 2017 and February 2018. The Fraser Institute issued a report Thursday highlighting steep increases to Ontarians' power bills between 2008 and 2016 in comparison to the national average. The right-leaning think tank attributes the difference to "poor energy policy choices" including phasing out coal.

In Hydro One's governance agreement, the provincial government kept the right to replace the entire board other than the CEO. In 2015, Premier Kathleen Wynne told the Ontario legislature that the province would still "have a say" on how Hydro One was run, adding, "We retain control of the removal of the board, the removal of the CEO."

In a statement sent to National Observer on Thursday, Ontario Energy Minister Glenn Thibeault did not speak to what tools enable the government to fire the board or the CEO.

"It’s up to Doug Ford to try to explain exactly how his policy would work," Thibeault said. "We’ve already seen the chaos created by a man in the White House who’s governing by firing people all the time. Ford’s gimmick will drag us down into the same mess and won’t actually do anything to reduce hydro bills either."

Editor's note: This story and headline were updated at 3:04 p.m. EST on April 12, 2018 with new comments and a correction to the province's shares in Hydro One. The story was updated again at 5:19 p.m. with details about Hydro One's governance agreement.

Kids: To save money Pinto

Kids: To save money Pinto Ford is going to fire the board of directors and the outlandishly remunerated CEO! Did he once consider reversing the privatization of this essential service as initiated by Conservative Mike Harris, and as is being implemented by arch enemy Liberal Wynne?

Pinto's firing of Mayo-Man ($6.2M – 2017), plus the directors' fees, will pale in comparison to the non-productive money annually wasted. It's the privatization that's the problem stupid!

PS: Given hindsight is 100%: it would have been preferable for the Ontario Government, under its 'public' utility, to run test pilots in renewable energy to understand better its capabilities before selecting providers. Or, better by ibuilding the green infrastructure from a position of hand-on experience that best assessed cost-efficiencies against effective service delivery – and retained public ownership?

Funny, both parties favour the privatization and greening of electricity supply based on the lie that it would be cheaper and to achieve that it made Hydro One's governance private and essentially beyond control of our elected officials. How's that working out? ...jes sayin'

Absolutely agree, SB. The pile left by the Common Sensers is still in clean-up phase. They did monumental damage to everything they touched - hydro, housing, social welfare, to name the ones I worked with at the time. It was slash-and-burn. Tremendous hardship was dumped on vulnerable people overnight.
As one of the low incomers who is the very grateful recipient of the Ontario Electricity Support Programme, I can see a Ford crew taking that away and, the `folks' who are benefiting from it are just the `folks' Ford is courting. Will the demographic change and not vote against their best interests?