'It's past a nightmare:' Father of hockey crash survivor recalls carnage 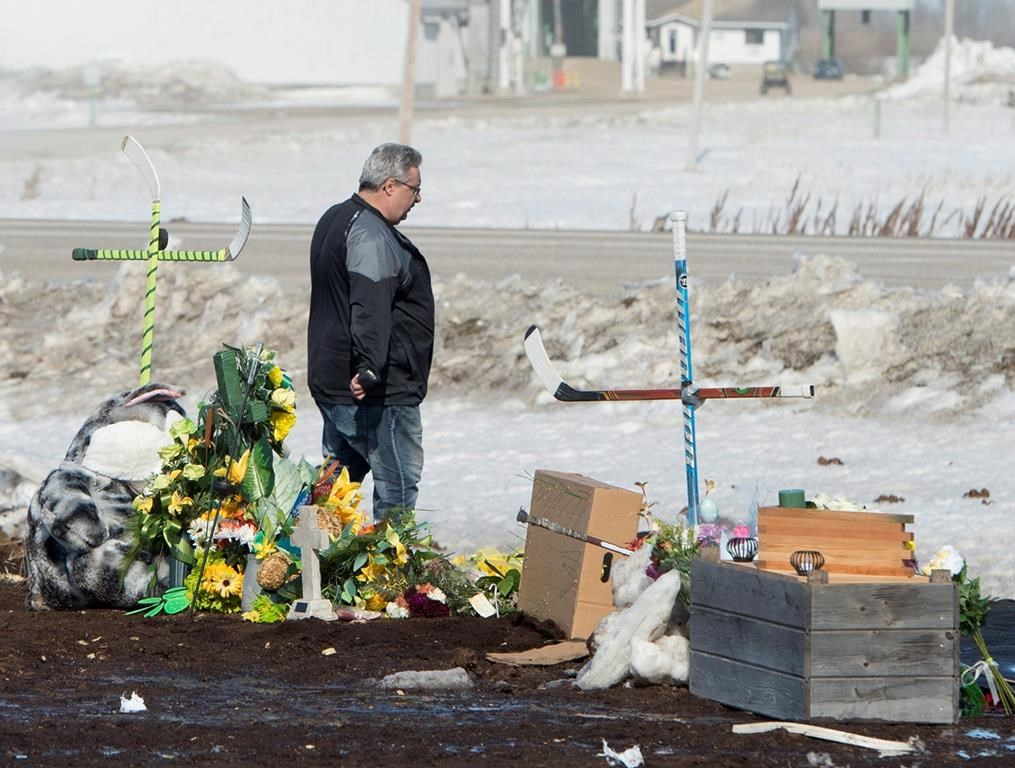 Myles Shumlanski looks around a makeshift memorial at the intersection of a fatal bus crash near Tisdale, Sask., on Tuesday, April, 10, 2018. Photo by The Canadian Press/Jonathan Hayward
Previous story
Next story

Last Friday, Myles Shumlanski sped down the highway to the scene of a nightmare.

He stopped there again Tuesday, looking through snow for wallets, cellphones and other belongings of the 16 people who died.

"It's starting to melt," he told The Canadian Press.

"I'm sure some parents would really appreciate something returned."

For Shumlanski, the rural intersection he passes each day on the way to his home in northeastern Saskatchewan will never be the same.

He was one of the first to arrive after a bus carrying the Humboldt Broncos junior hockey team collided with a semi truck about 20 kilometres north of Tisdale. The team was on its way to a playoff game in nearby Nipawin.

Shumlanski's 20-year-old son, Nick, a forward who had recently joined the Broncos, was on the bus.

He was miraculously able to walk away from the wreckage, grab a phone lying in the debris and call home.

His parents, sitting in their house along the highway just a kilometre away, had seen the bus go by.

"You know, I kind of heard something. But we've got dogs so we really never paid attention," said Shumlanski. "All of a sudden, a phone call. It was him. They were in an accident."

He said he jumped in his vehicle and headed down the road. It was a devastating site.

"I don't know how to explain it even as a nightmare, because it's past a nightmare," said Shumlanski.

"When you come up you see that bus and you didn't know it was a bus ... the roof was beside the bus. It was torn off.

"Some people thought it was just part of the trailer before they started seeing that carnage."

Shumlanski said he helped those he could.

"I looked under the roof. The boys under there were still alive so I put blankets over them."

Shumlanski said his shaken son waited in the family's vehicle.

"I had to run back to give him a hug because you just knew, 'Oh my God you're a fortunate guy.'"

Most of the debris has been removed since police reopened the intersection on Sunday. A large tarp remained over some of the muddy frozen ground where the bus landed.

A memorial was set up — two crosses made of hockey sticks with the words "Humboldt Strong" written on them, with stuffed animals, hundreds of bouquets of flowers and messages of condolences as well as a small wooden altar covered in flowers and candles.

Lorrie White and his father Norman, who live on farms across the road from the crash came to pay their respects.

"Dad kind of wanted to come and have a look and I was here last night just to show respect for the ones that lost their lives here. It's terrible," said Lorrie.

He said he heard the collision.

"I thought it was maybe the train because the train had just been here hooking up cars and when they do that it bangs, you know? But my wife said, 'No. I think that was a different bang.'"

Shumlanski said Nick is strong and doing okay despite what he has gone through and visits the hospital every day. Most of the 13 injured are still being treated for various injuries.

"I think his counselling is staying at the hospitals with his buddies and talking to his hockey friends. The other night he was going to the hospital. It was a little late. I said are you sure you want to go. He said those boys need to see a survivor and so do their parents," he said.

RCMP said they continue to investigate the cause of the crash, but Myles Shumlanski said he can't help but be angry at the truck driver, who wasn't injured.

"An accident of this magnitude shouldn't have happened. But it happened and there's nothing we can do about it now," he said.

"Of course I'm angry, because there's a stop sign. What happened? Why would this happen?"