Protests resumed on Burnaby Mountain at the gates of the Kinder Morgan pipeline construction site, as artists showed up with colourful signs representing fish, birds and other wildlife. Three women were arrested, including Pia Massie, the artist in residence at Emily Carr University's Centre for Culture and Community.

“I'm here because I feel a great responsibility to protect our coast and stand with Indigenous leaders opposed to this pipeline," Massie told National Observer. "Artists have always helped define key moments in history and this is one of them."

Susan Smyth, a 70-year-old artist also involved in the protest, shared her hopes that her artwork is "inspiring people to stand up for our future generations."

"The art you're seeing is of all the sea creatures of the salish sea, and the latest iteration are of the children," she said. 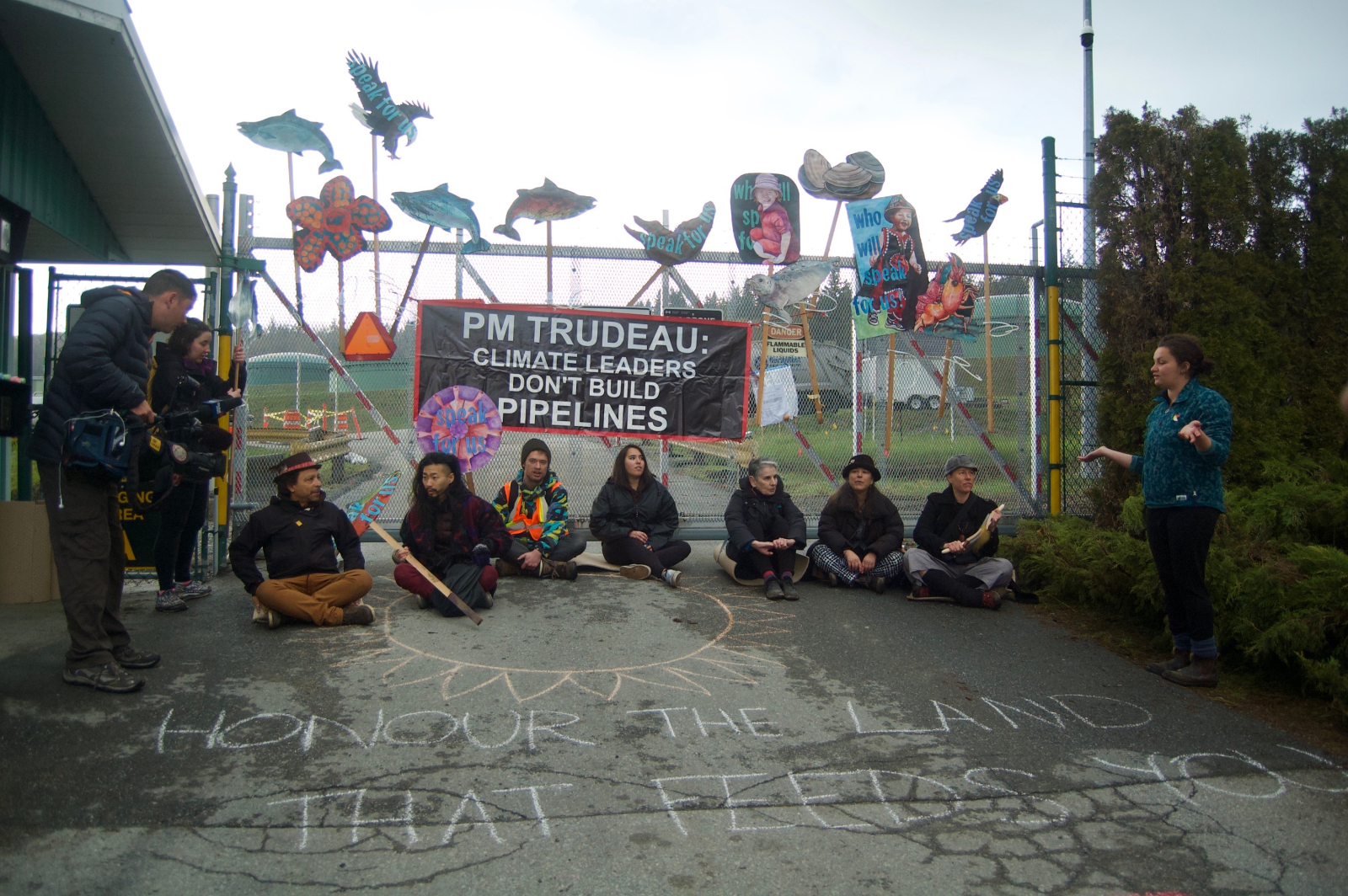 Artists sit in protest at the gates of the Kinder Morgan construction site on Burnaby Mountain, while actively crossing the injunction line on April 12, 2018. Photo by Dylan S. Waisman

Watch the full interview here, as Massie and Smith explain why they are risking arrest.

At the centre of the protest is Texas-based energy giant Kinder Morgan's Trans Mountain oil pipeline expansion, which would carry 890,000 barrels of petroleum products from Alberta to a terminal in Burnaby. If built, the project would bring a seven-fold increase in oil tankers traffic on the coast. Supporters say this will fuel growth in the oil industry, create thousands of jobs and millions in new tax revenue for B.C. and Alberta. Opponents, meanwhile, say it would put the coastline at risk and push Canada's climate change goals out of reach.

Violet Willliams, an 18-year-old Comox First Nations, University of Victoria student, said she was opposing the pipeline expansion for "future generations" who will inhabit the earth.

“I'm here because I feel a great responsibility to protect our coast and stand with Indigenous leaders opposed to this pipeline," Massie told @natobserver. Artists have always help define key moments in history and this is one of them."

So far, over 175 people have been arrested during daily protests for violating the court-ordered injunction that came into effect on March 15. Notably, MPs Elizabeth May and Kennedy Stewart have been arrested as well as a former Kinder Morgan engineer. ​

"In history, artists are the ones to help us see what is critical, and they are saying right now is the critical time to lean-in and I agree," Karen Mahon, Canadian director of Stand.earth told National Observer.

This is the first day protests have resumed since Kinder Morgan announced it would suspend all its non-essential spending on the project, and threatened to cancel if it could not make a deal with the B.C. government by the end of May. Since the announcement, construction on the mountain has continued.

"I think partly they were hoping these protests would end, but as we see these protests are continuing, and we see protests happening now across the country... I think it sends a really clear message to investors, that damn right it's too risky, and its going to get even riskier."

Dear Dylan,
Thanks for being there when other media stays silent or goes home.
Tom

Government has the resources

Government has the resources for research which should help it to foresee needs for the future and logically,
it would act on those needs. But not our Feds. With Kinder Morgan, it's the people who are are leading, and Instead of promoting and investing in sustainable developments, the Feds are arresting those who are wiser than they are.