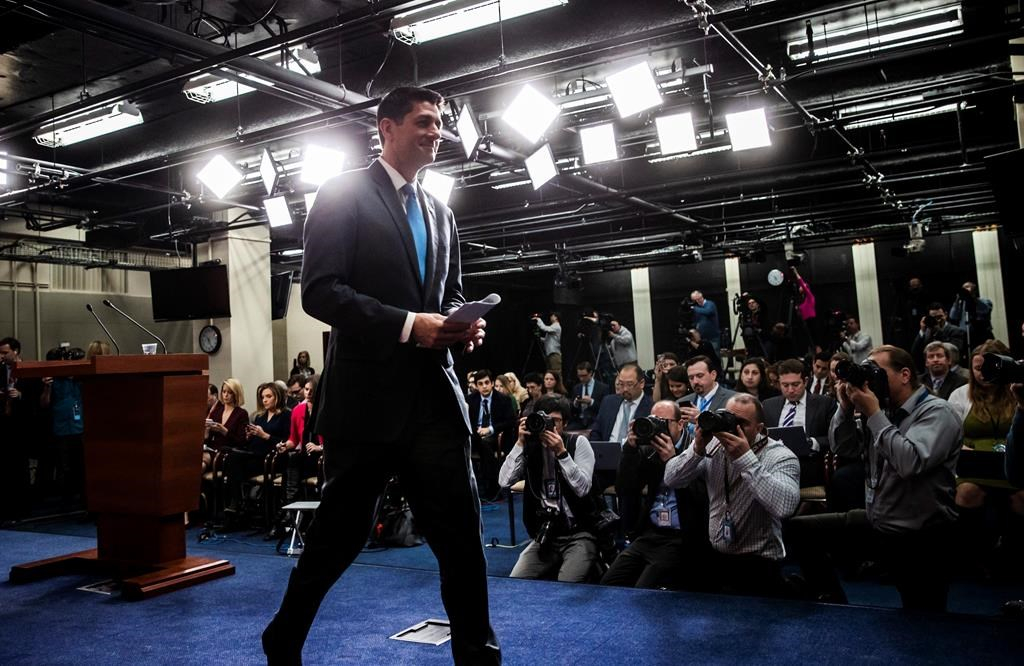 Speaker of the House Paul Ryan, R-Wis., tells reporters he will not run for re-election amid Republican concerns over keeping their majority in the House of Representatives, at the Capitol in Washington, on Apr. 11, 2018. Photo by The Associated Press
Previous story
Next story

Republicans were already sprinting for the exits in historic numbers, with fears of an impending electoral horror show driving them into political retirement before congressional elections this fall.

Now their leader has joined the stampede.

The highest-ranking member of the U.S. Congress, Paul Ryan — who as speaker of the House of Representatives controls which bills get votes and is third in line for the presidency — announced Wednesday that he's retiring from politics later this year, at age 48.

He insisted his departure has nothing to do with the growing fear among Republicans that they might lose power and be forced to watch helplessly as a new Democratic majority spends two years blocking bills and tormenting President Donald Trump with congressional investigations.

Ryan said he's still confident about the election, and is leaving for family reasons: "My dad died when I was 16 — the age my daughter is. And I just (don't) want to be one of those people looking back on my life (wishing) I'd spent more time with my kids."

"Best wishes to my friend ... as he moves on to a new chapter," Harper tweeted. "His long career of serving the people of Wisconsin and the United States will not be soon forgotten."

But Ryan's dramatic departure — barely two years after his party, on the brink of an internal civil war, turned to him as a popular unifier between the feuding factions of conservatives, moderates, libertarians, and populist-nationalists — fits a larger pattern.

Pew Research calculates that this is the biggest number of departures for the Republican party before an election since a 1930 exodus, which came in the doldrums of the Great Depression and was followed by an era of Democratic dominance.

Thirty-eight Republicans are leaving the House by choice after this November's election. In addition to Ryan, another lawmaker, from Florida, announced his resignation Wednesday.

One of the nearly-departed said it's becoming tough in the trenches. Charlie Dent of Pennsylvania told reporters that his colleagues are in an impossible position: Defy Trump and get scorched by supporters, or defend him and get singed by other voters.

"I think there's a lot of wariness. And a lot of exhaustion, frankly," Dent said. "This is going to be a challenging year ... You're really in a no-win position."

He said modern American politics has evolved into one question, and it's not about your ideas or principles but whether you are personally with or against Trump.

Some Trump fans are pleased with this personnel turnover. To them, it's like the creative destruction of the old Republican party: some careers are ending, and what's left in place is a new party.

"I do think Republicans are going to contract. So they're going to lose seats," Trump booster and conservative organizer Matt Schlapp told MSNBC.

"But I can tell you this: the House Republican conference is going to get a lot more conservative. Most of the retirements and most of the seats up for grabs in November (belong to) moderate Republicans."

His assessment that Republicans face losses this fall is rooted in historical precedent, as parties that hold the White House almost always lose congressional seats.

The question is how many.

Democrats are believed to need to a seven percentage point lead across the country to take the congressional majority, partly because their votes are concentrated in urban districts.

They held an average lead of about 7.8 points in the last 10 surveys posted on the website Real Clear Politics, while they held some kind of lead in every single one of the 61 surveys posted this year.

Political analyst Kyle Kondik at the University of Virginia put the odds Wednesday of a shift in power at 50-50. He added that he's being cautious compared to other analysts and wrote that Ryan's departure was "another bad sign for the Republicans' prospects."

Some Republicans put it more starkly.

"I think Republicans are right to worry about a wave," conservative pundit Hugh Hewitt told MSNBC.

"I think we very well could lose the House."

Former New Jersey governor Chris Christie told ABC that Ryan's departure "is a big indicator that the speaker doesn't think he'd be speaker anymore ... If you're a betting person, you’re betting on the Democrats for the House in the fall."

One positive note for Republicans is the Senate. The states up for races this year leave little hope of a Democratic takeover there. And that's the chamber that approves Trump's nominations, including ambassadorships, cabinet, and judges.

Dems: No evidence of credible threats against EPA's Pruitt

Is Scott Pruitt a liar?