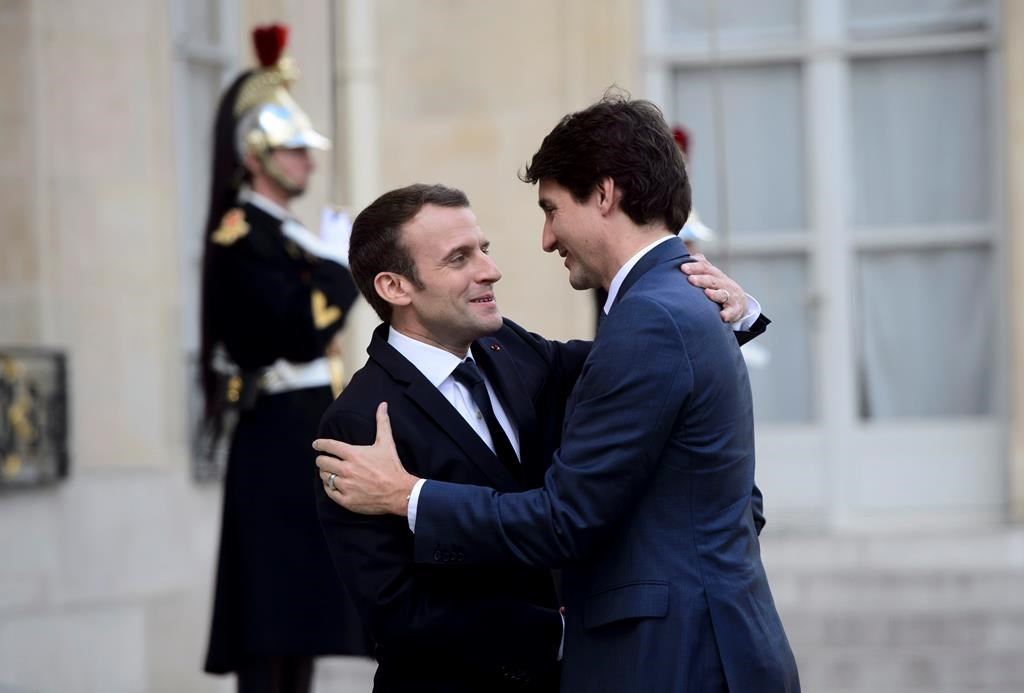 Trudeau is making the remarks alongside Emmanuel Macron following a meeting in Paris with the French president, who has made the African country a priority for his government.

Trudeau says Canada's new approach to peacekeeping — focusing on promoting roles for women, dealing with child soldiers, focusing on training and more targeted deployment of resources — suits the modern era, which is marked less by well-defined, international conflicts and more by unpredictable perils posed by terrorism and outside actors.

Earlier today, former Governor General Michaelle Jean, now the head of the Francophonie, thanked Trudeau for joining the Mali mission, which is reeling after Sunday's deadly attack by Islamic militants.

The attack was launched against two bases near Timbuktu, where militants reportedly disguised as peacekeepers set off several suicide bombs and launched rockets at international forces. One peacekeeper was killed and more than a dozen others were injured, including several French soldiers.

Canada is planning to send six military helicopters to Mali later this year to help with medical evacuations and the transporting of supplies and ammunition, although they will be based in a different location than where Sunday's attack occurred.

Mali is considered the most dangerous peacekeeping mission in the world, with 166 blue helmets killed since 2013, more than half by what the UN calls "malicious acts."

Jean lamented the attack as she met with Trudeau at the Francophonie’s headquarters in Paris, which the prime minister is visiting this week.

She went on to thank Canada for agreeing to send forces to Mali, which is a former French colony and current member of the Francophonie, adding: “The Sahel region, for Mali and for all of us, is a question of high importance.”

On Tuesday, Trudeau will become the first Canadian prime minister to address the French National Assembly and the most recent leader to be given that rare opportunity since King Felipe of Spain in June 2015.

His speech is expected to touch on the rise of nationalism, populism and xenophobia, which have become serious concerns in France and other parts of Europe in recent years.

Much of the prime minister's two-day visit will also focus on trade as Canada looks to ease its dependence on the U.S. market.

Trudeau's message will include highlighting the potential benefits of the new Canada-European Union free trade deal, which came into force in September.

On Tuesday night the prime minister will head to London where he will meet with the Queen and British Prime Minister Theresa May on Wednesday, then attend a meeting of Commonwealth leaders on Thursday.

He returns to Ottawa on Friday.

Mali choppers face crash threats, but can shoot back at militants: Vance