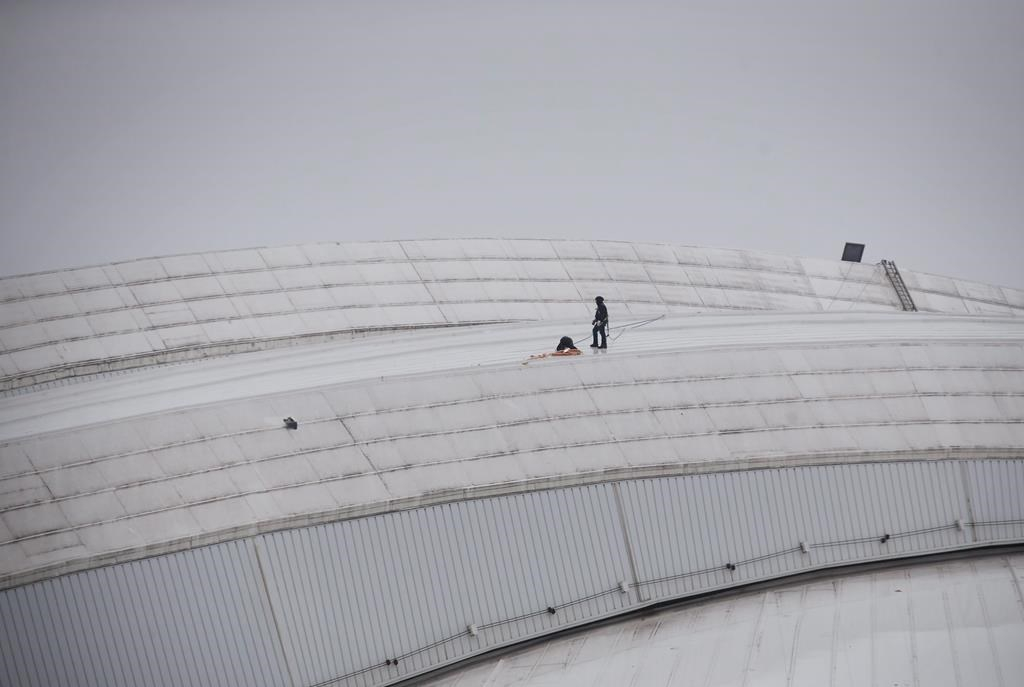 Workers examine a hole in top of the Rogers Centre as the area around the CN Tower is closed off due to reports of falling ice in Toronto on Monday, April 16, 2018. Photo by The Canadian Press/Cole Burston
Previous story

Chunks of ice crashing down from the CN Tower following a weekend of freezing rain forced the closure of the Toronto landmark and damaged the roof of a nearby baseball stadium, prompting the Toronto Blue Jays to cancel Monday night's game against the Kansas City Royals.

Police had blocked off the area directly under the CN Tower and the Rogers Centre due to the "relatively large" blocks of ice tumbling down onto the streets and sidewalks below.

The Blue Jays said crews were working to repair a hole in the roof of the Rogers Centre and fans would be treated to a "traditional doubleheader" Tuesday afternoon.

"We apologize to our fans for this inconvenience," the team said on Twitter.

Toronto, along with much of southern and central Ontario, is recovering from an ice storm that resulted in power outages, cancelled flights and road collisions over the weekend.

By late Monday afternoon, provincial power utility Hydro One said crews had restored power to more than 300,000 customers across much of the province.

Hydro One said crews were still working to reconnect another 50,000 customers affected by approximately 520 outages.

Toronto Hydro said the number of customers in the dark had shrunk to about 700 Monday night from about 40,000. In most cases, crews were dealing with power lines and poles downed by high winds or ice-coated trees that snapped during the storm.

The mix of snow, freezing rain, ice pellets, rain and powerful winds that battered the region Saturday and Sunday had made driving treacherous, with provincial police reporting more than 1,600 non-fatal crashes on the highways surrounding Toronto over the two days.

Highway 400, south of Barrie, Ont., which had been closed in both directions after a collision involving two trucks took out the highway divider, was reopened to traffic Monday afternoon.

The poor conditions also prompted bus and school cancellations in parts of the province Monday, with schools in Hamilton, Halton and Peel regions closed for the day and buses cancelled in various other districts.

After pummelling Ontario over the weekend, the storm slowly moved east.

In Ottawa, which was under a freezing rain warning, all entrances to the Centre Block on Parliament Hill were closed because of falling ice.

Meanwhile, icy roads were creating slippery conditions in different parts of Quebec, with schools in the greater Montreal area and further afield closed due to the accumulation of freezing rain.

Hydro-Quebec reported Monday night that more than 23,000 customers were without electricity, the majority in the hard-hit Outaouais region in western Quebec and regions north and southeast of Montreal.

Air travellers were advised to check the status of their flights before heading out Monday, with delays and cancellations reported at airports in Ontario and Quebec.

Some universities and colleges also cancelled exams due to the weather, and with heavy rain continuing overnight there were concerns about possible localized flooding.

In Toronto, officials said the clearing of some streets was delayed as crews concentrated on clearing catch basins in an effort to prevent flooding as temperatures rise in the wake of the storm.