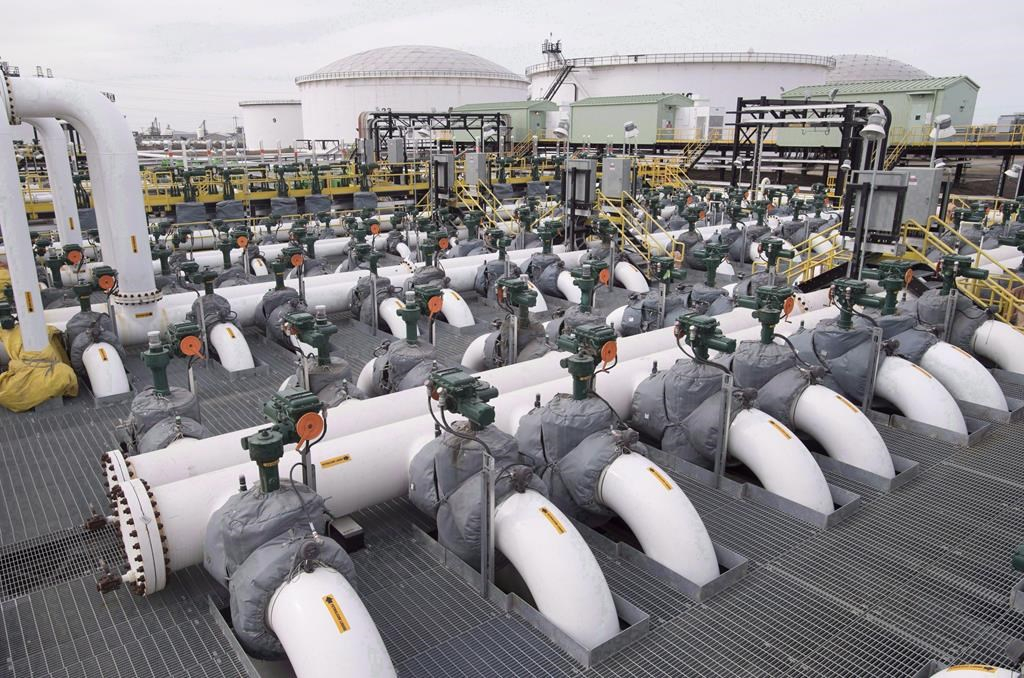 Pipes are seen at the Kinder Morgan Trans Mountain facility in Edmonton, Alta., on Thursday, April 6, 2017. A spokesman for refiners in Western Canada says any move by the Alberta government. File photo by The Canadian Press/Jonathan Hayward
Previous story
Next story

Economic damage will extend far beyond the fuel budgets of British Columbia residents if Alberta successfully enacts a bill allowing it to restrict oil and gas exports, observers say.

The Bill 12 legislation and the trade war escalation it might spark would damage Alberta and Canadian businesses and citizens as well as those in British Columbia, warned Greg D'Avignon, CEO of the Business Council of B.C.

"By punishing British Columbia because of the actions of the government of the day — while it might feel good and I completely understand it — it actually has consequences people aren't thinking about for the citizens of Alberta and our country as a whole," he said Tuesday.

On Monday, Alberta introduced legislation that would allow the energy minister to use export permits to control how much and what products truckers, pipeline companies and rail operators can ship.

The province says it might use the legislation to fire back at B.C. if it continues to block the Trans Mountain pipeline expansion in the courts. The dispute is headed for a showdown on May 31, the date on which proponent Kinder Morgan Canada Ltd. has said it might cancel the $7.4-billion project unless it is convinced it will be allowed to proceed to completion.

D'Avignon pointed out that Alberta and B.C. have the most integrated economies in Canada and, if fuel costs rise in B.C., it will affect the cost of trade goods going to Alberta and the cost to ship Alberta products such as grain from West Coast ports.

He said it could also affect the availability of B.C. residents to work in Alberta's oilpatch and B.C. exports of electricity and natural gas to Alberta, while possibly reducing federal income taxes paid by B.C. residents.

Alberta's proposed legislation and B.C.'s response are the latest manoeuvres in the escalating dispute over the $7.4-billion Trans Mountain pipeline expansion that runs from Edmonton to Burnaby, B.C. The federal and Alberta governments support the project, while B.C. opposes it, saying it is defending its coast from a potentially catastrophic oil products spill.

On Tuesday, the Saskatchewan government joined the fray, promising to also pass legislation allowing it to interrupt energy shipments to B.C.

The Alberta government said Monday it might restrict shipments on the existing 300,000-barrel-per-day Trans Mountain pipeline to diluted bitumen, thus displacing the refined products and light oil it carries.

"Directionally, we are supportive of the government's overall objective and the reason is we are a supporter of the Trans Mountain pipeline expansion," Ahearn said.

"(But) if there's curtailment all the way to the point of discontinuing that flow of product ... that utilization taken away from the refineries would have a pretty negative effect on the refineries."

Refiners would be forced to find alternative markets, accept lower prices, or run operations at less than optimum capacity to restrict output, he said.

Tighter supplies of gasoline and diesel in B.C. would likely drive up prices in B.C.'s Lower Mainland by about 10 cents per litre, said fuel market analyst Michael Ervin, senior vice-president at the Kent Group Ltd.

The estimate is lower than other experts have estimated, but he said it's high enough that refiners on the U.S. West Coast or possibly even Asia Pacific would be motivated to overcome logistical hurdles and start supplying the market.

In Alberta, meanwhile, the glut of gasoline and diesel would likely result in cheaper prices for motorists, especially in the Edmonton area, he said.

Imperial Oil Ltd. spokesman Jon Harding said Tuesday the Calgary-based company, which ships refined products on Trans Mountain, "understands the rationale" for Bill 12 and will comply if it's passed, but hopes a solution can be found that negates the need for its use.

Suncor Energy Inc., meanwhile, has a "vast logistics network" and would look to send refined product out of Edmonton to other markets if needed, said spokeswoman Sneh Seetal.

Andrew Leach, an associate professor with the University of Alberta's business school, said any economic impact of an Alberta energy export ban would be brief because he doesn't think the province's legislation is constitutional.

He suggested any attempts to implement a ban would be swiftly and successfully attacked by interested parties in court.

B.C. threatens to sue Alberta as all sides in Trans Mountain dispute dig in

Another nail in the coffin of

Another nail in the coffin of "free trade"? Interesting how quickly those old protectionist instincts surface. Interesting also how 'local' they turn out to be.

We do live in interesting times.

And so it goes. Economic

And so it goes. Economic sanctions cut both ways. Everybody loses.