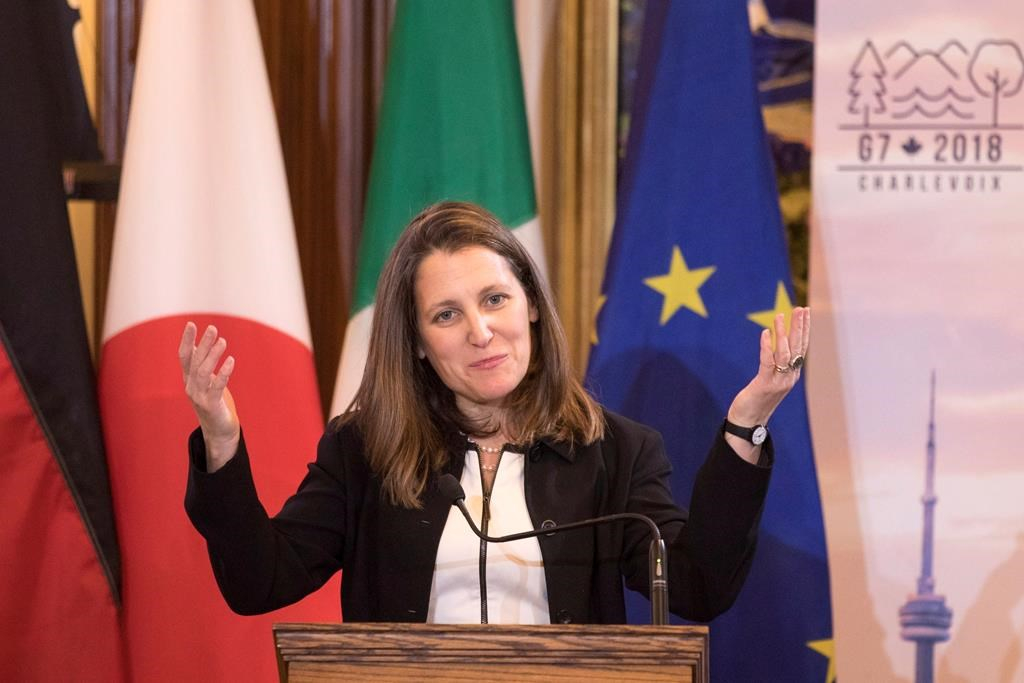 Foreign Affairs Minister Chystia Freeland wants the disruptive influence of Russia on the West to be a top agenda item, and she set the table — literally — for Ukrainian foreign minister Pavlo Klimkin to deliver that message to her G7 counterparts.

Freeland invited Klimkin to be part of Sunday's talks, hosting him and other ministers at her home for a traditional brunch that was prepared by her own children.

"It was amazing how she organized it, in the sense of creating this friendly atmosphere of hospitality with ministers sitting around the table with her kids … what they had personally prepared," Klimkin told The Canadian Press in an interview Sunday afternoon.

Their conversation was decidedly less festive, with Klimkin pressing the G7 to make a strong, unified stand against what he described as Kremlin efforts to destabilize democracy through election interference and other cyber-meddling.

He said the petri dish for that strategy remains his country, which Russia invaded in 2014, annexing Crimea and occupying its eastern Donbass region.

"Fundamentally, Ukraine is perceived by many and also by Russia as a sort of test range for testing Russian nonconventional warfare — hybrid war," Klimkin said.

"Fighting along with Ukraine would give an immense asset to the whole democratic community in the sense of understanding Russian efforts to destabilize the western world."

Freeland views the clash of the forces of democracy and authoritarianism as a defining feature of our time, and she has singled out Russian President Vladimir Putin as a major disrupter.

Klimkin said all G7 ministers are committed to protecting democratic institutions. That includes the Trump administration in the U.S., where former FBI director Robert Mueller is leading the special investigation of possible collusion between Russia and the campaign that brought Trump to power in 2016.

Klimkin said he had a "great meeting" in Toronto on Saturday with U.S. Deputy Secretary of State John Sullivan.

"We have clear, consistent bipartisan support on (Capitol) Hill. We have such support from the administration."

Trump has nominated his CIA Director Mike Pompeo as his next secretary of state, but Pompeo isn't in Toronto because he continues to face opposition to his confirmation.

The G7 foreign ministers began meetings in Toronto on Sunday about the world's many peace and security challenges, with the ongoing tensions with Russia and the North Korean nuclear crisis taking centre stage

The gathering comes days after North Korea pledged to suspend testing of its nuclear and long-range missiles and close its nuclear test site, and days ahead of this week's historic summit between North Korean leader Kim Jong Un and South Korean President Moon Jae-in.

Trump is also working on his own landmark meeting with the North Korean leader in the coming weeks, after dispatching Pompeo on a secret mission to meet Kim two weeks ago to lay the groundwork.

No date has been set, and there is uncertainty about what Trump might be able to accomplish.

Trump's envoy to Canada, Ambassador Kelly Craft, says her boss is leading international efforts to persuade North Korea to give up its nuclear weapons arsenal.

"Concerning the upcoming meeting, President Trump is really carrying the water on the North Korea issue," Craft said in a statement to The Canadian Press. "It's something we've also been working closely with Canada on."

Freeland announced that she and the European Union's high representative for foreign affairs, Federica Mogherini, will co-host a meeting of women foreign ministers in Canada this September.

Canada has made the advancement of gender equality a pervasive theme that cuts across all G7 discussions, and the foreign ministers' meeting is no exception.

She said her male Japanese counterpart, Taro Kono, was the only man at Saturday's dinner table. She noted that she and the other female ministers "are often in meetings where we are the only woman, and so Taro got to see a little bit what it was like."

Canada and Japan signed a military co-operation agreement on Saturday that will allow each other's militaries to share equipment during joint exercises.

Freeland and Kono also met last month in Tokyo, where they affirmed their commitment to keep economic and diplomatic pressure on North Korea to end its nuclear program at this G7 meeting.

Freeland will be joined Monday by Public Safety Minister Ralph Goodale, who will lead his G7 interior minister counterparts in talks on terrorism and cyber security.

Trade missions for women, Indigenous and LGBTQ interests in 2018: minister