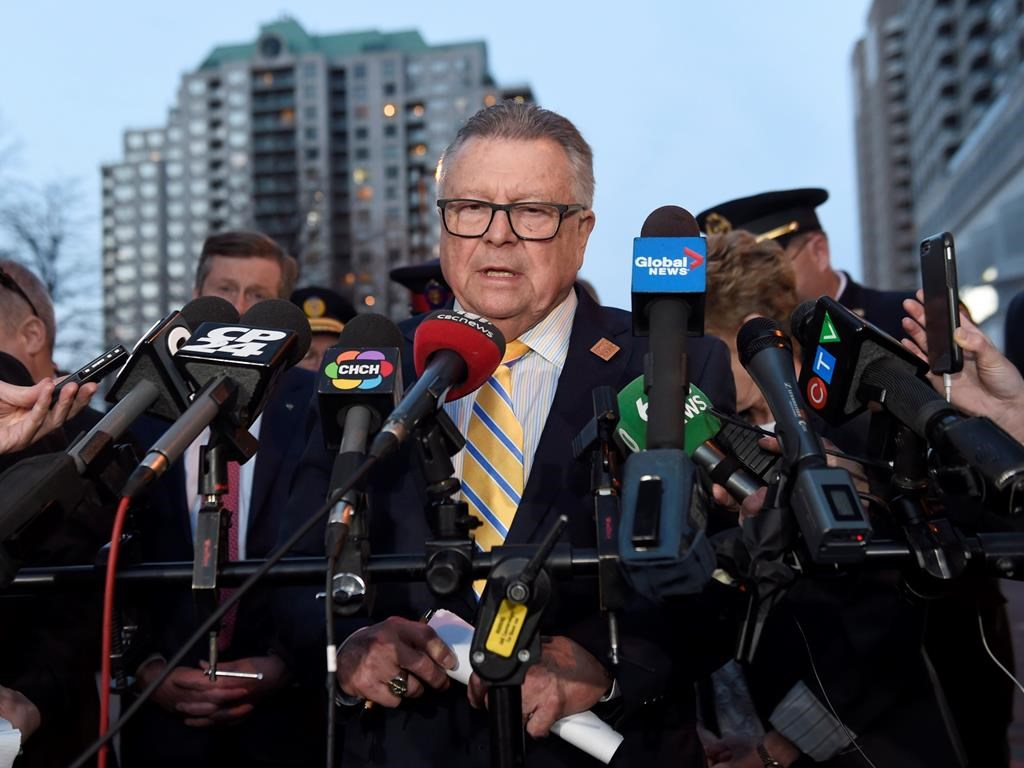 Ralph Goodale, Federal Minister of Public Safety and Emergency Preparedness, speaks during a news conference in Toronto on Monday, April 23, 2018. Photo by The Canadian Press/Nathan Denette
Previous story
Next story

There remains no information to warrant a change in Canada's risk level, Public Safety Minister Ralph Goodale reiterated Monday following what he described as a "horrendous" midday van attack in Toronto that killed 10 pedestrians and injured 15 others.

Goodale was on hand for a news conference in the northern Toronto neighbourhood where the deadly attack took place earlier in the day — and where police revealed both the identity of the driver of the van and that the death toll had reached double digits.

"The events that happened on the street behind us are horrendous, but they do not appear to be connected in any way to national security, based on the information available at this time," he said.

Goodale and Foreign Minister Chrystia Freeland happened to be in the city Monday for a meeting of G7 foreign and security ministers when news emerged of the incident, which took place without warning on a crowded city sidewalk under brilliant spring sunshine.

He told an earlier briefing with reporters that the precise details of what had happened, as well as the motive behind the "attack," were still unknown, and he confirmed Canada's risk level would remain unchanged.

"There is no information available to me at the present time that would lead us to conclude that there should be a change in risk level."

Not long after the incident and not far from the scene, a man seen standing near a badly damaged white rental van was taken into custody following a dramatic standoff with police that was captured on video by a bystander.

During the evening news conference, Toronto police Chief Mark Saunders identified the man as Alek Minassian, 25, of Richmond Hill, Ont., but said it was still too early to speak of a motive.

"We are looking very strongly to what the exact motivation was for this particular incident to take place," Saunders said.

Canada's current threat level is medium, where it has been since October 2014, when a gunman killed a sentry at the National War Memorial in downtown Ottawa before storming Parliament Hill, where he died in a hail of gunfire.

Both Goodale and Freeland expressed admiration for police and first responders on the scene and offered sympathies to the victims and their families.

"I think all of our hearts go out to the people hurt in this incident and to their families and loved ones," Freeland said. "It's a very sad moment."

In a statement Monday night, Prime Minister Justin Trudeau offered his condolences to the loved ones of those who were killed.

"We should all feel safe walking in our cities and communities," Trudeau said. "We are monitoring this situation closely, and will continue working with our law enforcement partners around the country to ensure the safety and security of all Canadians."

"They faced danger without hesitation, and their efforts no doubt saved lives and prevented further injuries," he said.

News of the incident sent shockwaves through the House of Commons, with many politicians and staffers closely monitoring social media for updates. Police provided little detail through the afternoon, adding to the ongoing sense of confusion and concern as the hours passed.

Ali Ehsassi, MP for the Willowdale riding where the incident occurred, said there were many pedestrians in the area at the time.

"It's a very busy area," he said, adding he did not know any reason why the area might have been targeted. "(I'm) very much shaken up, as you can imagine, and just been glued to my phone just trying to obtain as much information as I possibly can."

Ehsassi said his own home is just two minutes away from the Yonge Street scene. He shared condolences for his neighbours and constituents.

"My heart goes out to them. They're in my heart, they're in my thoughts and I'm very much looking forward to heading back home as soon as possible."

Earlier in the day, Goodale said he understands there are many questions that remain unanswered, but said law enforcement is working hard to get as much information out as quickly as possible.

"We cannot come to any firm conclusions at this stage. The police are conducting their thorough investigation to determine exactly what happened and why it happened."

Condemn both terrorism and Islamophobia in wake of Edmonton attacks, Imam says