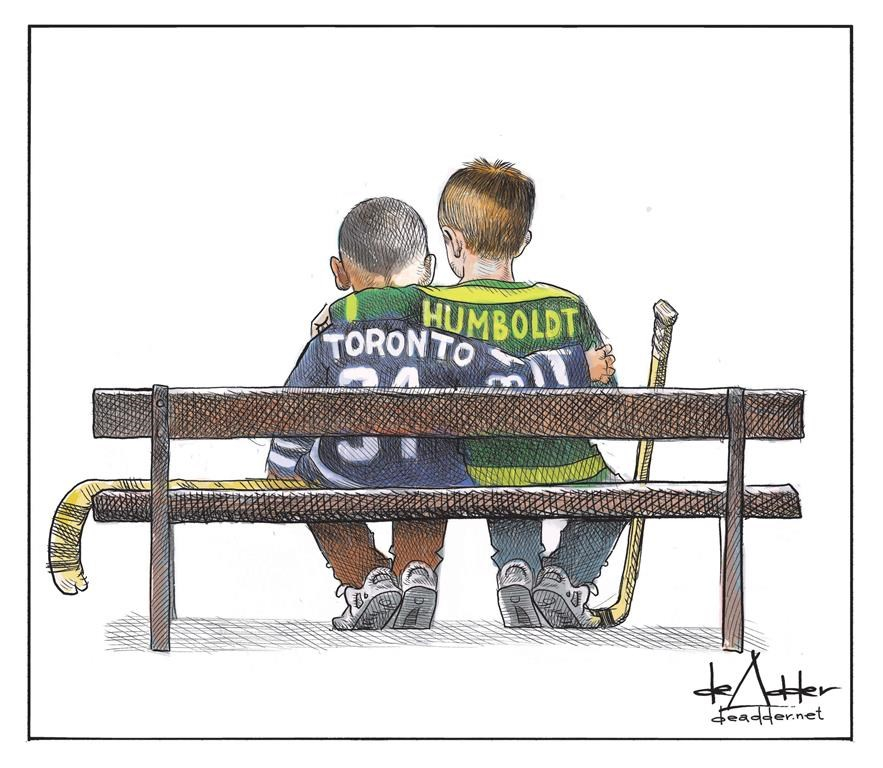 The cartoon published in the aftermath of van attack in Toronto that killed 10 people and injured 14, shows a view from behind of two young boys in hockey sweaters sitting on a bench with their sticks by their sides. Handout photo by Michael de Adder
Previous story
Next story

Halifax cartoonist Michael de Adder says he was simply trying to find a small bit of positivity with an image that has garnered national attention for its depiction of recent tragedies in Toronto and Humboldt, Sask.

The cartoon, published in the aftermath of Monday's van attack in Toronto that killed 10 people and injured 14, shows two boys in hockey sweaters sitting on a bench, sticks by their sides.

The boys, one wearing a green and yellow Humboldt Broncos jersey and the other wearing a blue and white Toronto Maple Leafs sweater, have their arms around one another, supportive in crisis.

"The reality is, I'm just happy to perhaps in a small way add a little bit of positivity in a very negative situation, so that's all I'm trying to accomplish with that cartoon," de Adder said in an interview.

De Adder, an award-winning national freelancer, is one of two Halifax cartoonists regularly garnering attention for works that appear to capture the national mood.

Bruce MacKinnon, the Halifax Chronicle Herald cartoonist for whom de Adder often substitutes, gained a similar audience for a cartoon this month following the Humboldt Broncos bus crash that claimed the lives of 16 people and injured 13.

MacKinnon said there's no set protocol for producing work in such trying circumstances.

"There is a lot more sensitivity involved and you have to consider all the factors a lot more carefully because every nuance in the cartoon is going to be examined very carefully by the reader," he said. "Sometimes that adds to the power of the cartoon if you get all those nuances right — if you don't you could end up being a lightning rod for a lot of anger."

MacKinnon's Humboldt cartoon depicts the provinces and territories as a group of red-shirted hockey players coming to the aid of a green-shirted Saskatchewan player. The slumped player has his arms around his closest neighbours, Manitoba and Alberta, who are supporting his weight.

"The thing that stands out about the story aside from the obvious sadness ... is the outpouring of compassion of Canadians," he said of his inspiration for the drawing.

De Adder said his Toronto cartoon was the result of an evening of struggle to come up with what he thought would be an appropriate response to the tragedy.

He said he probably worked on 10 thumbnail sketches before gradually deciding he was on the right track, adding that it's one thing to get an idea, but another to depict it.

"I knew I was going to have Humboldt consoling Toronto, but I didn't know if I was going to do adults, or a couple, or two guys. I went with kids and it sort of worked the best."

The cartoon was posted on de Adder's Twitter account and has since received thousands of likes from people calling it "heartwarming" and a "beautiful tribute."

The image was re-tweeted by Alberta Premier Rachel Notley, who remarked "well done @deAdder" as part of a message expressing condolences to the victims and their families and thanking first responders.

Another Twitter user said: "I am from Saskatchewan and this hit hard. Thank you for remembering our recent loss as well."

But both cartoonists' recent images also drew the unwanted attention of T-shirt manufacturers looking to make a buck.

De Adder tweeted late Wednesday that his Toronto cartoon had been used without permission by one T-shirt company, while MacKinnon faced the same issue last week with a different company that used his Humboldt cartoon.

"You're profiting off of people's grief and the image belongs to me," de Adder said on Twitter.

Over the years, MacKinnon has received national and international acclaim for several of his cartoons, including one following the shooting death of army reservist Cpl. Nathan Cirillo at the National War Memorial in Ottawa in 2014.

That cartoon trended on Twitter and requests to use it came from media outlets like CNN, Fox News, and The Independent newspaper in the United Kingdom.

Another MacKinnon cartoon depicting the aftermath of the Las Vegas shootings last fall — Uncle Sam re-assuring the NRA that "you're safe" amid the bodies of gunshot victims — was also re-tweeted by a host of celebrities, including actors Ron Perlman and Mark Hamill.

Both Halifax cartoonists downplay the attention for work emanating from a smaller market like Halifax.

They also say they have known each other for years, and share a friendship rather than an outright rivalry.

"We're sort of in our own little drawing-table worlds," said MacKinnon. "We are always trying to outdo each other and that kind of thing and that's a healthy environment."