By Elizabeth McSheffrey | News | May 3rd 2018
#67 of 117 articles from the Special Report: State of Journalism 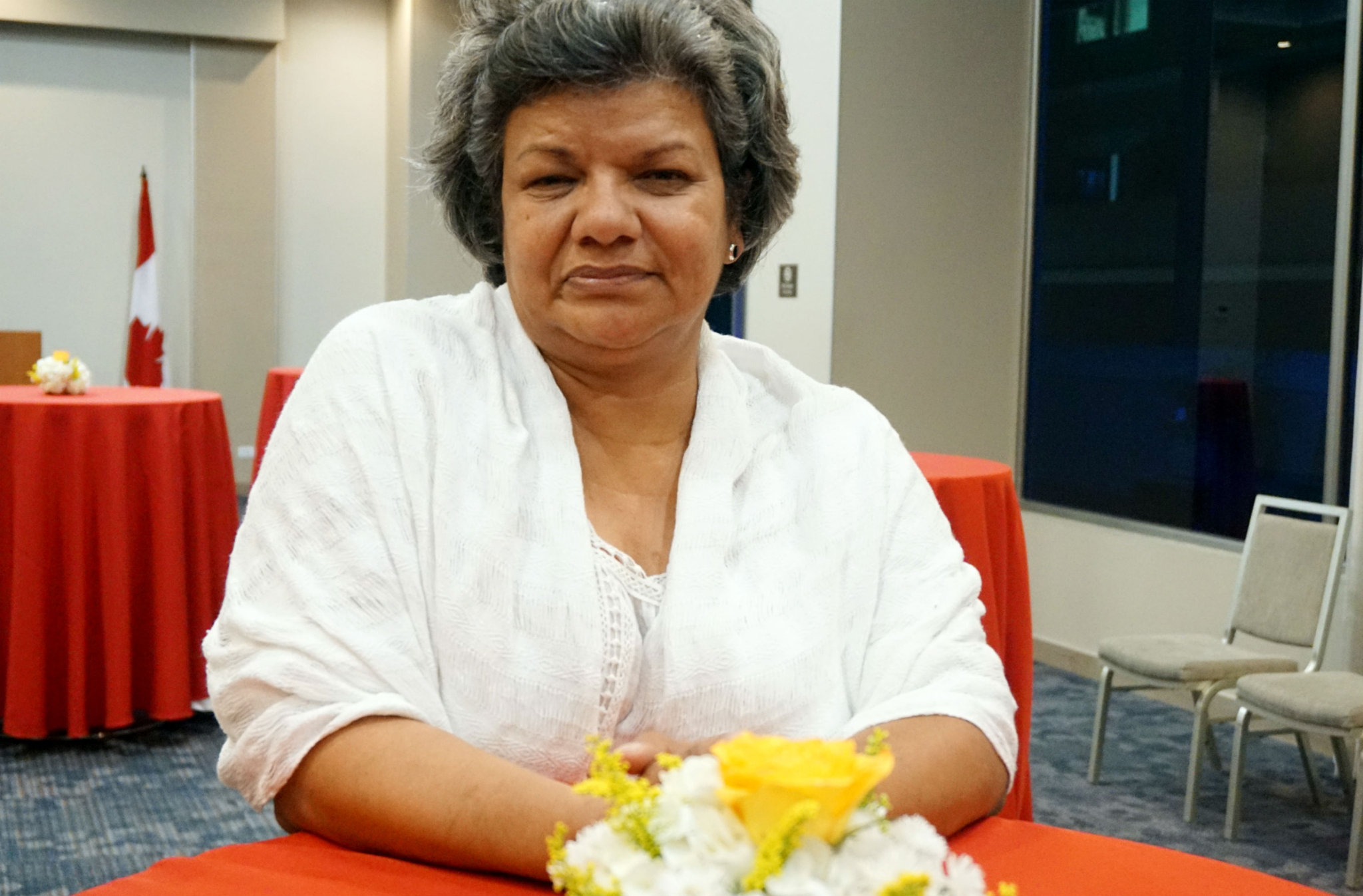 Sandra Maribel Sánchez, seen here at Hyatt Hotel in Tegucilapa on Oct. 23, 2017, is a fearless feminist journalist and the second woman in Honduran history to be assigned to cover the National Congress. Photo by Elizabeth McSheffrey
Previous story
Next story

Sandra Maribel Sánchez shrugs off blackmail as easily as she would an online troll.

Threats against your life are all in a day's work, says the 55-year-old Honduran journalist, when you report on feminism, politics and human rights in a country rife with corruption and organized crime and ruled by men.

“Once you’ve realized that threats are going to be a part of it, you don’t feel fear when they materialize,” Sánchez says breezily. “It’s not a matter of how afraid or brave you are, critical journalism has to do with your convictions.”

We’re seated on a jostling bus bound for Tegucigalpa, the capital of Honduras. It's a winding four-hour road trip from rural Río Blanco, through lush green forest, coffee and corn plantations.

“As you may have noticed, I’m pretty strong-willed, so I defend my freedom of expression,” she adds. “I don’t go before hand to ask for permission… and if someone doesn’t like it, they don’t have to listen.”

Over three decades, Sánchez has risen as a respected, progressive broadcaster in Honduras — known for staring down the authorities time and again in the name of freedom of the press. As a woman, she has endured numerous indignities along the way, ranging from sexist comments to police arrest and a physical attack.

But Sánchez vows she will never be silenced, because "journalism is my life."

Conquering congress in the 1980s

An indefatigable reporter, Sánchez launched her career more than 30 years ago, at a time when women were unpopular in the workforce, let alone a newsroom.

“It’s not a matter of how afraid or brave you are, critical journalism has to do with your convictions," says Honduran journalist and feminist Sandra Maribel Sánchez.

She also did it in Tegucigalpa, which is widely recognized as the most dangerous capital on Earth with no declared war. Honduras is a troubled Central American state where a woman is killed every 16 hours, and at least 69 journalists have been murdered since 2001.

Sánchez rose to prominence as the second female reporter to cover national politics in Honduran history. But her success didn't come easily — at her very first job, she was told that women should not be covering politics at all.

It was around 1985, and she had been hired as a political correspondent by Radio América Honduras, only to be assigned to cover health and education. She pushed back against newsroom management and wound up covering the National Congress.

Her next challenge came in the halls of government itself, where no one — not even her reporting colleagues — would take her seriously. In group interviews with politicians, known as scrums, she was constantly overlooked.

“When I would ask a question, my colleagues would turn off their tape recorders,” she remembers, her bitterness discernible. “They assumed I wouldn’t ask anything that could be considered important.”

They were wrong; Sánchez quickly started scooping the male reporters. They paid attention and started deferring to her, having her ask the first questions in a scrum.

“That’s when they considered me competition and somebody not to be dismissed,” she says. “But as women, it’s really hard to win those spaces.”

Sánchez stayed with Radio América for 18 years. In addition to reporting, she hosted her very own talk show, whose air time she used to cover controversial topics, such as feminism, Indigenous rights and environmental protection.

Yet despite earning her chops as a political correspondent, eventually she realized she would never be promoted to newsroom management because she was a woman.

Before she was a journalist, Sánchez was a primary school teacher. But it never sparked her passion, and after completing her qualifications, she moved on.

“I had 40 children in my classroom and I was paid the equivalent of $40 a month,” Sánchez explains. “… I wanted to study journalism because I had been organized politically since high school and thought as a journalist, I could contribute to the changes our country needed.”

Sánchez grew up during the Cold War, after a series of military coups and a war with El Salvador that returned Honduras to civilian rule. At the urging of the U.S. government — which had established a continuing military presence there to train local troops and support El Salvador — Honduras adopted a national security regime that targeted internal subversion and dissent.

Sánchez was undeterred by the risks of being a young female activist. She joined Honduras’ Federation of Secondary Students, and travelled the country to attend “underground” meetings on such dangerous topics as feminism, Indigenous sovereignty and systemic state corruption.

It was at these meetings that she came to know another female Honduran trailblazer — beloved Indigenous activist and Goldman Environmental Prize winner Berta Cáceres. Cáceres was murdered in March 2016 after leading a 20-year campaign against the Honduran state selling ancestral Indigenous lands to foreign companies. The assassination, still under investigation today, sent shock waves through the country.

“We learned from her that when you have a dream you have to go after it and work for it, regardless of the risks… We also learned that you have to have an international forum to make (the issues) known.”

This is why the weight of social change in Honduras falls so heavily on journalists, Sánchez explains — they have a direct line of communication with the outside world. But that "great responsibility" often comes at great risk, as she learned in the latter half of her career.

In December 2007, Sánchez was awarded the Argentina-based Fundación Democracía sin Fronteras Prize for Journalistic Integrity. It is given to those who, against great odds, uphold freedom of expression, objectivity and the fight against corruption.

At the time, she was the news director for Radio Globo — a station that did not refuse her a promotion based on sex. One of her first moves in management was to ensure her reporting team was at least 50 per cent female.

“The female journalists were actually better than the men, and our audience knew that too,” she says with a grin.

The recognition was a major accomplishment, she adds, given that in Honduras, “all women are perceived to be less skilled and capable than men in every field, regardless of how well the person is doing the work.”

“The patriarchy is the underlying theme everywhere, even of course, within women’s perceptions,” Sánchez explains. “Although there’s been a great deal of effort within women’s and feminist organizations, it has not been enough to deconstruct a culture that was built over centuries.”

Sánchez stayed at Radio Globo nearly five years, steadfast in her commitment to coverage of environmental defence, Indigenous rights, social welfare, freedom of expression and “critical analysis of what (politicians) aren’t doing.” During that time, life in Honduras took a turn for the worst — especially for journalists.

In 2008, Sánchez and her family received numerous threats and were repeatedly followed by unmarked vehicles due to her support for a hunger strike undertaken by a handful of public prosecutors who wanted proceedings initiated in the country’s most notorious, unpunished corruption cases. Her family was unharmed, but shaken.

It was the calm before the storm. A year later, there was a a constitutional crisis and coup d’état in Honduras. The president was ousted and exiled and constitutional rights were suspended for 45 days. By August 2009, as civil unrest and conflict escalated, the interim government had shut down a number local broadcasters — including Sánchez’s Radio Globo, whose offices were raided by masked soldiers.

The following years were among the deadliest for journalists in Honduras. Between 2010 and 2012 alone, at least 22 journalists were murdered. Only one case resulted in sentencing.

At the time, Frank La Rue, a United Nations special freedom of expression rapporteur, called these statistics “unacceptable and inhuman,” and called on the new Honduran president to create measures to protect journalists and their families.

“I knew this was a profession subject to ongoing censorship — that we would have to struggle for freedom of expression, and that when you want to practice the kind of journalism I practice, you are always at risk. But journalism is my life.”

In 2014, Sánchez received an unprecedented apology from a Honduran police officer who disrupted her coverage of a 2011 protest, during which he and his team had teargassed a bus full of innocent passengers. Sánchez’s camera was broken during the incident, which was characterized by the local paper El Heraldo as an “aggression” limiting a journalist’s “right to work freely.” The policer officer voluntarily submitted to freedom of expression sensitivity training, and at the time, Sánchez deemed his actions "courageous" and precedent-setting.

Two years later, in November 2016 — several months after the murder of her dear friend Berta Cáceres — Sánchez was beaten, dragged and arrested by police at tollbooth near Tegucigalpa, where she was covering a protest supporting the right to free movement (without tolls) in the country. She was later released without charge, and her news station filed a complaint with the Special Prosecutor for Human Rights in Honduras.

Asked whether she has been targeted more than other journalists in the country, she responds:

“There’s really not a robust, critical press in our country so it’s very easy to be singled out by those who do not tolerate freedom of expression.”

A dream for true democracy

After a brief stint with Radio Gualcho, Sánchez moved on to Radio Progreso — a proudly independent broadcaster run by the Catholic Order of Jesuits, dedicated to amplifying marginalized voices and advancing human rights. She works there today, and has made a name for herself as an outspoken feminist, political and social commentator — particularly during the recent election.

It was a tumultuous and controversial election, wrought with accusations of fraud, protests and violence that left than 30 people dead on the streets, and launched Honduras into its worst political crisis in a decade.

Yet amid such troubled times, Sánchez says she sees glimmers of hope, particularly for women. Over the years, the country has enacted a domestic violence law, recognized ‘femicide’ (the sex-based murder of women) in the criminal code, and increased punishments for offenders. It has also launched a new Protection Mechanism for Human Rights Defenders, which outlines a number of government safety measures to protect journalists and their families.

More women have access to education now than when she was a little girl, she adds, and increasingly, women are asserting themselves in politics and society at large.

“I see young women with fewer fears. I see them negotiating,” she tells me, our ride to Tegucigalpa nearing its end. “They can end relations when they’re not satisfactory. That makes me think that there has been progress even though there have been a number of issues.”

I ask her what her dream is — what she hopes her struggle will amount to in her lifetime. The answer is surprisingly simple.

“There would be equal participation of men and women, youth and adults, and black and Indigenous people in decision-making processes.”

Editor's Note: Elizabeth McSheffrey travelled to Honduras with the Nobel Women's Initiative and Just Associates, which provided translation services for this interview.

Indigenous Xinka march in Guatemala to banish Canadian mine

Honduran women are leading a rights revolution. How many lives will it cost them?

Kudos to Sanchez, and angels

Kudos to Sanchez, and angels around her!

Canada was and is one of the

Canada was and is one of the key backers of the coup and the coup-associated government because Canadian-registered mining companies have major interests there. It would be nice if we would instead stand up for democracy and people like Sandra Sanchez.