By Dylan Sunshine Waisman | News | May 4th 2018
#33 of 35 articles from the Special Report: Syrian Refugees in Canada 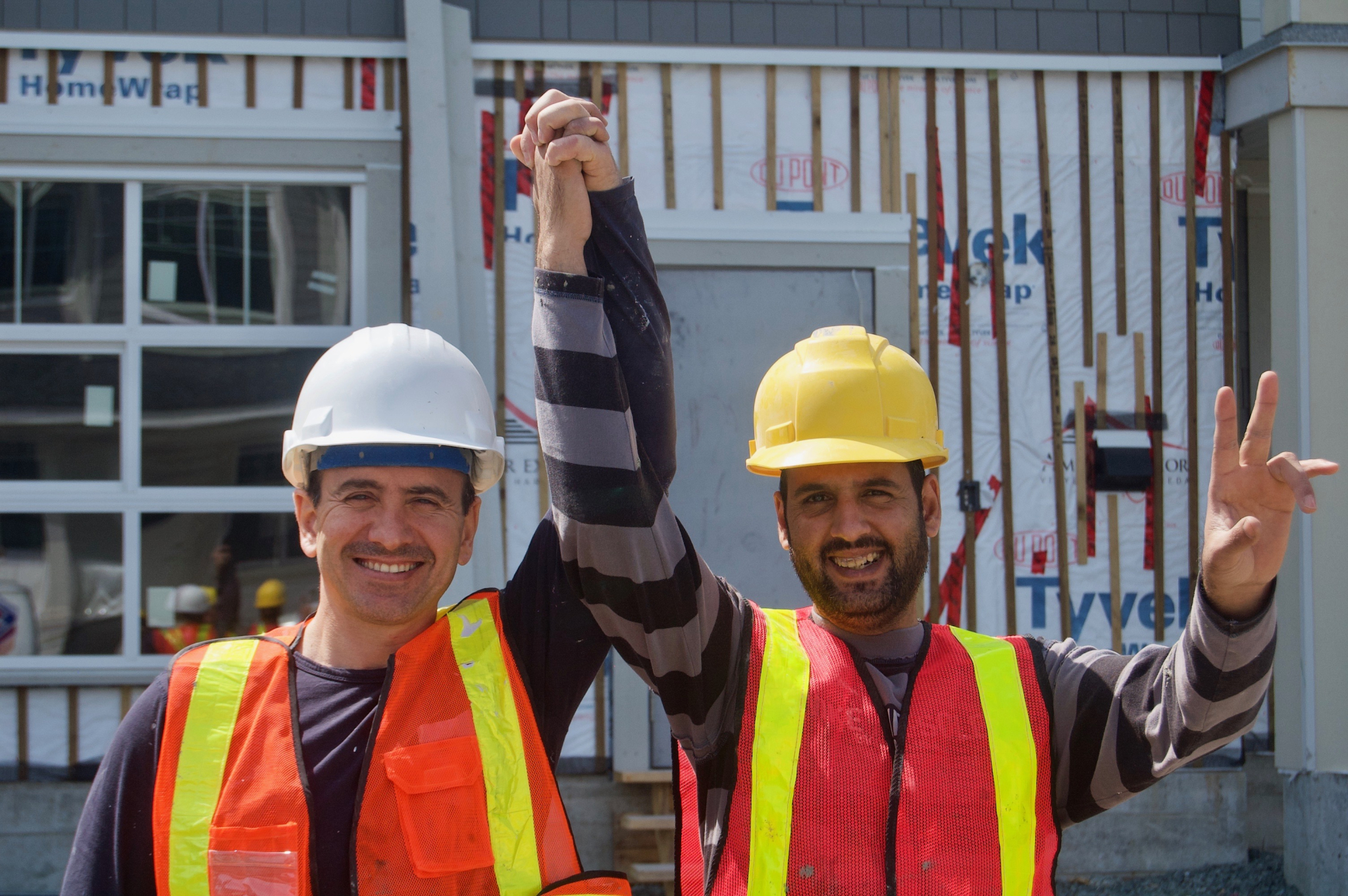 Hasan Sheblack, a Syrian refugee, and Guss Ash, a Jordanian immigrant, met while working construction at the Fairmont Hotel in Vancouver. A few years later, the two are not only business partners, they consider each other “brothers.”

On days off, Hasan will phone Guss when he just needs to chat, and Guss said he cares for Hasan’s family as much as his own, buying vitamins to give to his children when his friend is too busy.

The two attribute their bond to respect and understanding, underscoring that respect is the most important thing. It’s also what they like most about living in Canada.

“You know, respect, you cannot find everywhere,” explains Guss. But in Canada he said, “the people are respectful wherever you go.” This respect is what makes Canada feel like home for both of them. “Canada is now my country,” Hasan proudly declared with a smile on his face.

Getting down to business

Both men started up their own tiling and construction companies in Surrey: Guss Ash is the General Manager of Ultra GSM Construction, and Hassan Sheblak operates Sheblak Flooring and Tile Works.

They often work together on projects, and hiring help from the Syrian refugee community whenever they can. They don't often take days off, and travel across Canada tiling, painting and keeping themselves busy. Despite their success, it hasn't been smooth sailing to become entrepreneurs in their new Canadian setting.

Six months after arriving in Vancouver as a government-assisted refugee with his wife and three kids, Hasan started to launch his own business. For Hasan, the language barrier was the huge, initial challenge. He took night classes to learn English, attending every day after work. One week went by without seeing his family at all. “I go to work, [they’re] sleeping, I come back, [they’re] sleeping,” he reflects.

Deciding it was important to spend time with family, he stopped his classes and “learned fast," teaching himself English while building up his own business.

On top of the struggle of learning a new language and culture, both Hasan and Guss were targeted as newcomers by a predatory employer. When Hasan first arrived, he was being paid in cash by his boss, not realizing he was being paid under the table. The man scammed him out of $9,000, and threatened that if Hasan dared tell authorities, he would reveal that Hasan was being paid illegally, telling him it was cause for deportation.

Instead of reserving pent up anger at being taken advantage of, Hasan feels pity for his former boss and those he impacts.

“I am so sad for this man," he said, explaining that he regularly targets Syrians and other newcomers because of their vulnerability and lack of experience with Canadian laws.

Guss, looking into the distance, out of the soon-to-be kitchen’s third story window, recalled the life he led before his construction career in Canada. He has his PhD in IT and Business from a Jordanian university, and a rich background of experience as the director of a large IT firm for 20 years, none of which was considered valid in the Canadian job market.

Guss explained that he had to start from scratch if he wanted to continue in tech, so he quit and went back to construction. “It was a hard decision, but I think it was the right decision. I have four kids…so I need to work hard." He sees the career change as a necessary adaptation. “You can’t say, ‘Oh no, I cannot work here, because I am a doctor.' If you want to live [in Canada], you have to adapt."

Hassan, too, changed the course of his career. Although he owned a tiling company in Syria, it was much larger, with an entire factory dedicated to granite and tile-making. His goal for the future is to build his current company back up to the level it once was in Syria.

The two shared their advice for achieving success. “The most important thing is dedication, working hard, and looking for the future.” Guss motioned with his hands held in parallel above his chest, creating an invisible square border. “If you stay in here, your future is in here,” he said, referencing the cramped quarters of the mock boundary. He then expanded his arms to their full length. “If you open the horizon for yourself, it will open for you.”

The two laugh about last winter, when they drove 16,000 kilometres to work at a job in Saskatchewan. Hasan gets out his phone to show photos of snowbanks, massive icicles.

“We went for 15 days, left our families and our kids behind. We stayed there and it was very, very cold,” Guss recalls. He missed his family, but doesn’t regret working long hours to support them.

The two men light up with joyful smiles when speaking about their children. Guss burst into laughter when asked if his children enjoy Canada. “Yes!” he exclaimed. He thinks back on a recent conversation with his son, Saif.

“I said, 'Saif, when we get the citizenship, we go back to Jordan.'” He recounted his son's reply while laughing. “He said, 'Baba, you are dreaming.'”

They would never go back to Jordan, because they love Canada so much — everything is available, and they can do whatever they want, he said —without worrying about wars, and unstable situations.

With the growing Syrian community, parts of their home culture can be found in Canada as well. More and more Mediterranean food is becoming available, and even familiar “seasonal fruits” are being shipped in. Anyway, they like Canadian food. In particular, Hasan loves the bread. “In Syria I heard somebody say that Canadian breads are so good. I came here, I love it. it’s so sweet!”

They end our conversation with more wisdom to newcomers.

He emphasizes that hard work pays off, and that success “doesn’t matter if you are fifty or twenty-years-old.” Hassan adds, “When we go home at 5 p.m. everyday we are very tired, but when we wake up in the morning, we are very fresh, because we like to come to work.” Their smiles and ambition feel infectious.

On the subject of immigration, Guss said it's "very important.” He sees the different ethnicities living in Canada as an asset. “If you bring new people to your country, you bring new experience, new lifestyle and new directions,” he said. “It's an added value to the country.”

They survived war and brutality to get here. Now, they're cooking up a storm.