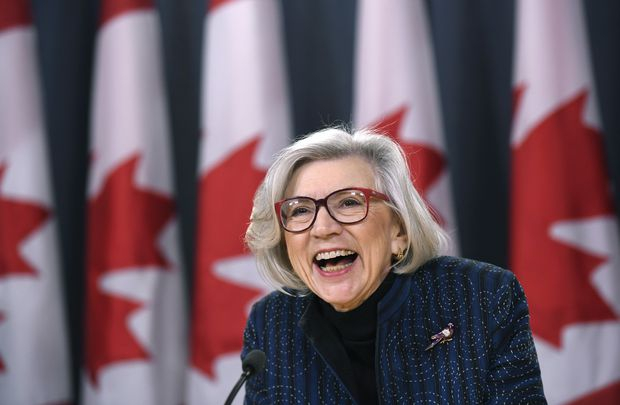 Former Supreme Court Chief Justice Beverley McLachlin speaks during a news conference on her retirement in Ottawa on Dec. 15, 2017. Photo by the Canadian Press
Previous story
Next story

Beverley McLachlin, the former Chief Justice of Canada, has some tough love for new writers trying to produce their first books.

In a wide-ranging conversation with National Observer’s Sandy Garossino, McLachlin tied together her youth reading Nancy Drew and the Hardy Boys with her decades as a jurist. She also weighed in on current political issues like the role of women lawyers and the representativeness of juries.

“If you want to be a writer, just do it,” she said, citing P.D. James, the British crime writer who famously woke up at 5 a.m. to write before starting her day job. “At some point you have to just say, ‘I’m going to write,’ get the words down, get the characters down… you’ll figure out if the story is going somewhere or not. You owe it to yourself.”

The conversation, part of the 2018 Vancouver Writers Fest, sold out less than 24 hours after tickets went on sale. The full interview will be available soon on Garossino’s new podcast. [Watch out for more details on that.]

McLachlin’s first novel, “Full Disclosure,” is a legal thriller that will surely excite Supreme Court fans digging for Easter eggs planted every few pages. It’s set in Vancouver, where McLachlin was appointed to the County Court in 1980. The protagonist, a young lawyer named Jilly Truitt, is torn between her feminism and the professional demands of defending the man accused in a salacious murder plot. At one point, she grapples with whether valuable but flawed evidence is admissible, a legal question that was turned on its head by a series of McLachlin Court decisions.

“Naturally, I did insert little bits here and there from my own experience,” McLachlin said. “But it’s all fiction.”

Growing up in Alberta, McLachlin had always flirted with being a novelist. “I wanted to portray a strong, independent defence lawyer… I was ready to do that in the late 70s. And then fate came and the Justice Minister asked me to go on the Court,” she said. “I knew I couldn’t combine being a fiction writer with being a judge.”

As she approached the Supreme Court’s mandatory retirement age, she began writing-- at first, before heading to work, then on weekends. “I really didn’t believe i could write a publishable book, but I said, ‘I’m going to give this a try,’” she said. “Before long, I had a bit of a story going… As it turns out, I get to have my cake and eat it too.”

Garossino, a former Crown prosecutor, asked about how McLachlin’s feminist protagonist grapples with defending a misogynist. She noted that Marie Henein, a top criminal defense lawyer, was criticized for her defense of broadcaster Jian Ghomeshi, who was acquitted of sexual assault and harassment in 2016.

“The best of British legal tradition is that a barrister could not turn down a brief,” McLachlin said. “The idea behind that is that everybody is presumed innocent and everybody is entitled to a fair trial. A trial in a court, not in the court of public opinion. A real trial.”

On an audience question on the merits of judges compared to juries, McLachlin declined to get into the specifics of the Colten Boushie trial, but recalled her early experiences in Vancouver working to diversify jury lists that were overwhelmingly white and white-collar.

Despite being age-limited out of the Supreme Court of Canada last December, McLachlin will soon be in her robes again. In March, she was nominated to the Hong Kong Court of Final Appeal, the city’s highest judicial body. It is tasked with interpreting the Basic Law, a sort of mini-Constitution. It is a delicate position: the Hong Kong legal community has vocally protested against what they perceive as Beijing’s interference in the city’s very British judiciary. (Hong Kong’s top lawyers and judges are amongst the last in the world to wear horsehair wigs in the courtroom.)

Along with other foreign justices, she will take a part-time case load and hear them with four local judges. In her retirement, McLachlin says she looks forward to spending more time back in Vancouver, where she has a condo.

“I couldn’t set [the book] anywhere else,” McLachlin said. “It attests to my deep connection to Vancouver, but Vancouver is also a wonderful site… [my editors] commented that they liked the fact that Vancouver is a character in the book. I hadn’t thought of it that way, but it is.”

For McLaughlin, writing a novel has been “liberating.”

“After 36 years of writing prosaic judgments, I would like to do more, and I’m already thinking about something,” she said. “But let’s see how it goes.”