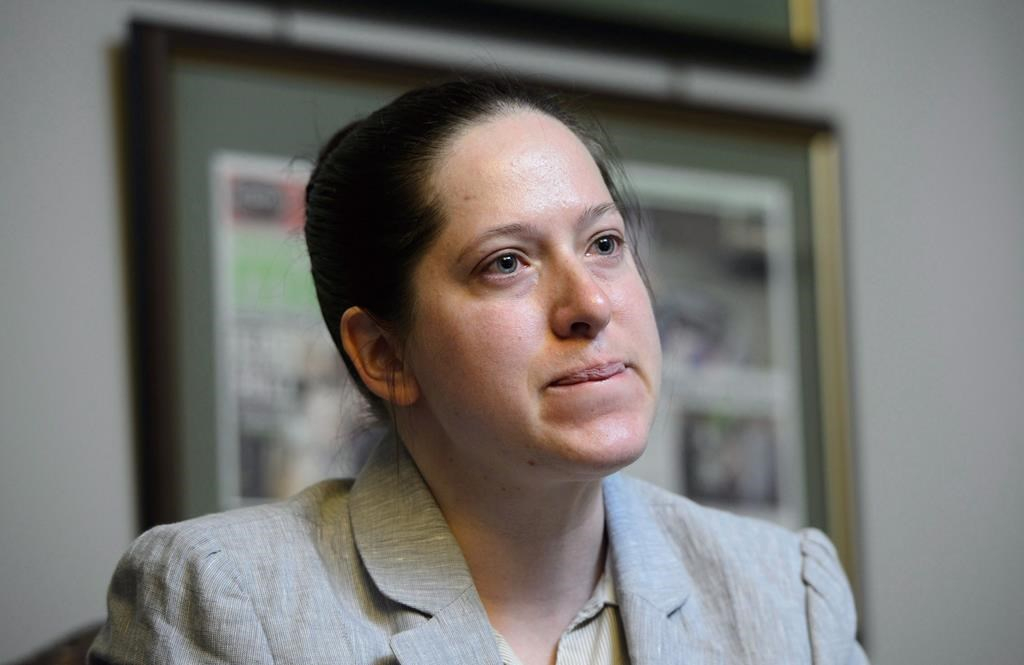 NDP MP Christine Moore speaks during an interview with The Canadian Press in her Ottawa office on May 11, 2018. Photo by Sean Kilpatrick/CP
Previous story
Next story

In an exclusive interview, Moore told The Canadian Press she intends to bring a defamation lawsuit against Glen Kirkland, as well as columnists Neil Macdonald, Christie Blatchford and Rosie DiManno, who reported on the matter.

"To want to do that because I dared to denounce people who behaved inappropriately, I think it's horrible," she said, referring to her role in the recent investigation into her colleague Erin Weir, as well as Liberal MPs Massimo Pacetti and Scott Andrews in 2014.

All three men were excluded from their respective caucuses following the investigations.

In the presence of her lawyer, the 34-year-old Quebec MP said she had a romantic relationship with Kirkland that lasted about four months, between June and October 2013.

"We were lovers," she said, adding they had discussed long-term plans.

"Maybe he lied to me and never loved me, but at the time I was sure we were lovers."

In the interview, she showed photos and a plane ticket indicating he'd planned to visit her in Quebec as proof of the relationship. One of Moore's close friends confirmed that Moore and Kirkland dated.

But Kirkland, when reached by phone in Manitoba, maintained he had never been in a relationship with Moore.

"God no! Relationships mean both parties have to be involved," he said.

The 34-year-old realtor has alleged that Moore behaved inappropriately toward him when he was vulnerable and she was in a position of authority due to her role as an MP.

But he says he did not file a complaint against Moore and not claim to have been assaulted. He said he only discussed the matter when a journalist questioned him.

Kirkland ran for the federal Liberal nomination in Brandon-Souris riding in 2014 before pulling out, according to The Brandon Sun.

While he confirmed certain details of Moore's account, Kirkland refused to fully discuss the events. He said he was ready to take a lie detector test.

The two met on June 5, 2013, when Kirkland, who was injured in a Taliban ambush in 2008, testified in a parliamentary committee about the treatment of injured soldiers in Afghanistan.

Kirkland said Moore then invited him to her office and encouraged him to drink gin, even after he told her he was taking medication and shouldn't drink. He claims she later followed him to his hotel room and spent the night.

Moore, on the other hand, dismisses Kirkland's account as "absolutely ridiculous," pointing out she had to vote in the House of Commons that evening.

"I spent three hours voting that night, it's on video," she said. "I can not have followed him to his hotel room."

House of Commons records show Moore was present at 10:40 p.m. for a series of votes that ended about an hour later.

Moore says she went to Kirkland's hotel afterwards in response to an invitation sent via text message and had a consensual sexual encounter.

The Canadian Press was not able to verify the text.

Moore said that while she invited the group of soldiers for drinks and gave Kirkland her business card, she disputes other aspects of his account.

She says she does not drink gin, and said he told the commission that the only medication he was taking was for insulin.

According to the transcript available on the House of Commons site, Kirkland also testified he was taking another medication against arthritis.

Moore says the group left her office in the beginning of the evening because she had to attend an event, but she later met Kirkland and several others on the patio of a downtown Ottawa bar - at his invitation, she said.

Photos from that night, including one on Kirkland's Facebook page, show another parliamentary employee was present. Empty beer glasses can be seen on the table.

When questioned on this last detail, Kirkland said he must have been drinking non-alcoholic beer that night.

Moore said Kirkland then accompanied her back to her office as she prepared for the vote, and embraced her there.

"It's him who kissed me," she said. "I responded to his kisses, but it's him who took the first step."

Moore says that after their night together, they stayed in touch and they saw each other twice.

On June 21, 2013, Kirkland sent her an email containing an itinerary and plane ticket for a trip for him to visit her in her riding in Abitibi-Temiscamingue. He later cancelled the trip.

The Canadian Press was able to view this email.

Moore and Kirkland then met in July at Kenosee Lake, a tourist village in Saskatchewan.

Moore showed The Canadian Press photos from what she describes as a "lovers' trip," stating, "there were none of his friends there."

Kirkland, on the other hand, claims Moore travelled to Saskatchewan where he played golf with friends without being invited.

He claims she also went to his home in Brandon, Man., few weeks later to visit him against his will.

She, on the other hand, said he accepted her offer to visit.

"I sent him my flight itinerary by email two days before I arrived," she said. "He picked me up in Winnipeg."

The Quebec MP says she ended the relationship in October 2013 due to the geographic distance between them and Kirkland's difficult divorce.

NDP Leader Jagmeet Singh suspended Moore from her parliamentary functions on Tuesday pending an investigation, which Moore hopes will be made public.

Moore said she felt she had no other choice but to take legal action against Kirkland and the columnists who reported his words.

"Before making public statements, before publishing reports, there have to be basic checks made to see whether there are inconsistencies," she said.

"If there are no inconsistencies, I think it's relevant to believe the victims."