A choice for many New Brunswickers after record flooding: clean up or walk away 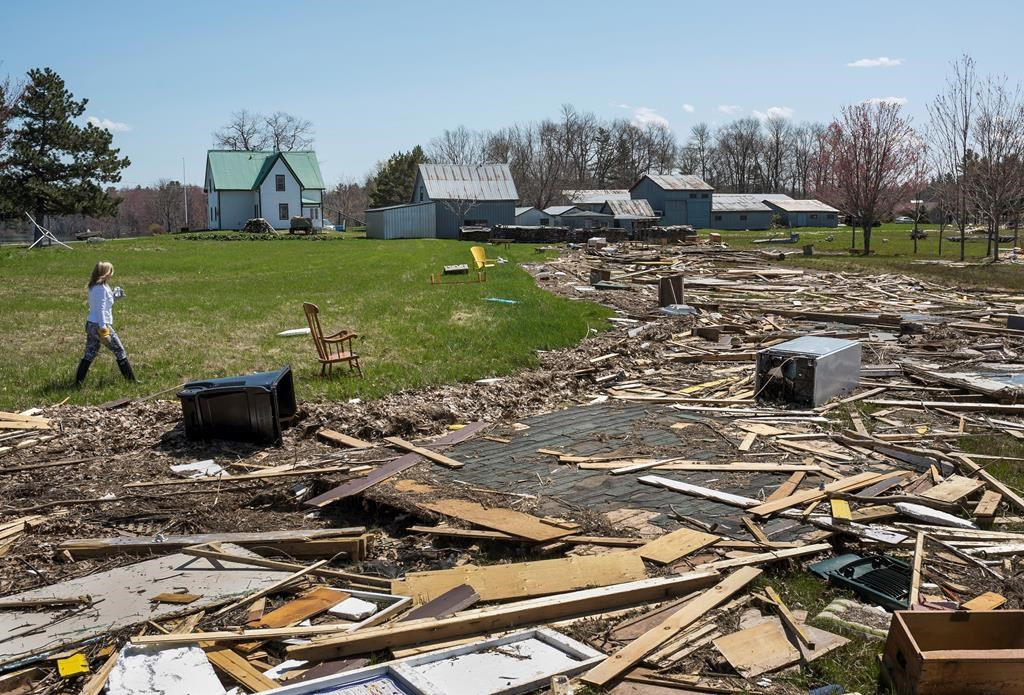 Michelle Cain looks for belongings in debris from homes and cottages destroyed by the floodwater from the Saint John River in Robertson's Point, N.B., on Sunday, May 13, 2018. Photo by The Canadian Press/Darren Calabrese
Previous story
Next story

For exhausted residents of the riverside communities of southern New Brunswick, the stressful process of cleaning up damaged properties and considering their future is underway in the wake of a record-breaking flood.

Water levels have been dropping steadily in the flood-stricken province, revealing structural damage in homes and businesses that often are not insured due to repeated inundations in recent decades.

In the community of Maugerville on the east side of the Saint John River, resident Sean Allen had over a metre of water spill into his home, wrecking the basement.

The moisture crept up into the joists of the main floor, meaning much of the first floor has been damaged as well, leaving him with some early estimates that repairs would be over $120,000.

He says insurance hasn't been available for damage from river flooding — leaving the 57-year-old mechanic to turn to the provincial disaster financial assistance program.

The federally-backed program offers financial assistance for uninsurable losses, up to $160,000 per primary residence or non-profit organization, and $500,000 per small business. It's estimated the program provided $24 million in aid after the 2008 floods in the province.

He doesn't know what the future holds

After living through his second devastating flood in a decade, Allen said if the government money covers most of his remaining mortgage, he would consider walking away from the home.

His home is over a kilometre from the Saint John River, and when he bought it two decades ago he was told the water wouldn't come that high.

Now, he says he doesn't really know what the future holds.

"If the Emergency Measures Organization were to come to the table and ... offer us enough money to pay our mortgage off, I'd walk away from the house," he said in an interview.

"There's quite a few people who will bulldoze the house, or just try and sell and move." #floods #NewBrunswick

His neighbour Bruce Betts has been spending recent days hauling damaged furniture, appliances and gyprock out of a basement that filled with over a metre of water.

The 53-year-old said the water spilled into his home and soaked the walls of his finished rooms, destroying a washer and dryer, a refrigerator and numerous furnishings.

He estimates thousands of dollars in damage, though contractors' estimates aren't in yet.

"It's a tiring process and there's the whole stress of not knowing what's going to take place with your house and whether its livable and whether you're going to get another flood," he said.

Kent Shaw, another neighbour, said he slept about four hours a day during the worst of the flooding, but managed to keep water out of his basement.

However, he too has concerns about the future.

His home was built with the historic 1973 flood levels in mind, but the latest flood has surpassed those levels and climate scientists have suggested old weather patterns are no longer a reliable guide to the future.

"If we have one of these floods every 10 years, and the millions of dollars it costs to clean up properties, I'm not sure government can sustain that. I'm not what the solution is. I'm not sure there is a solution," he said.

Meanwhile, neighbours and friends have been helping one another carry the damaged materials out of their homes for trucking away to landfill sites.

Markus Harvey, another Maugerville-area resident, said many people in his community are proceeding with basic repairs as quickly as they can in order to move back into their homes, as "people can't afford financially and mentally to be housed somewhere else trying to get back into their home."

He says he's among "the people who, when they leave, it will be in a pinebox," as he loves his community, and is willing to keep spending money to repair his home after the floods.

But he acknowledges there are neighbours who have reached their limit.

"There's quite a few people who will bulldoze the house, or just try and sell and move."

Flood waters on the St. John River force evacuation of some homes