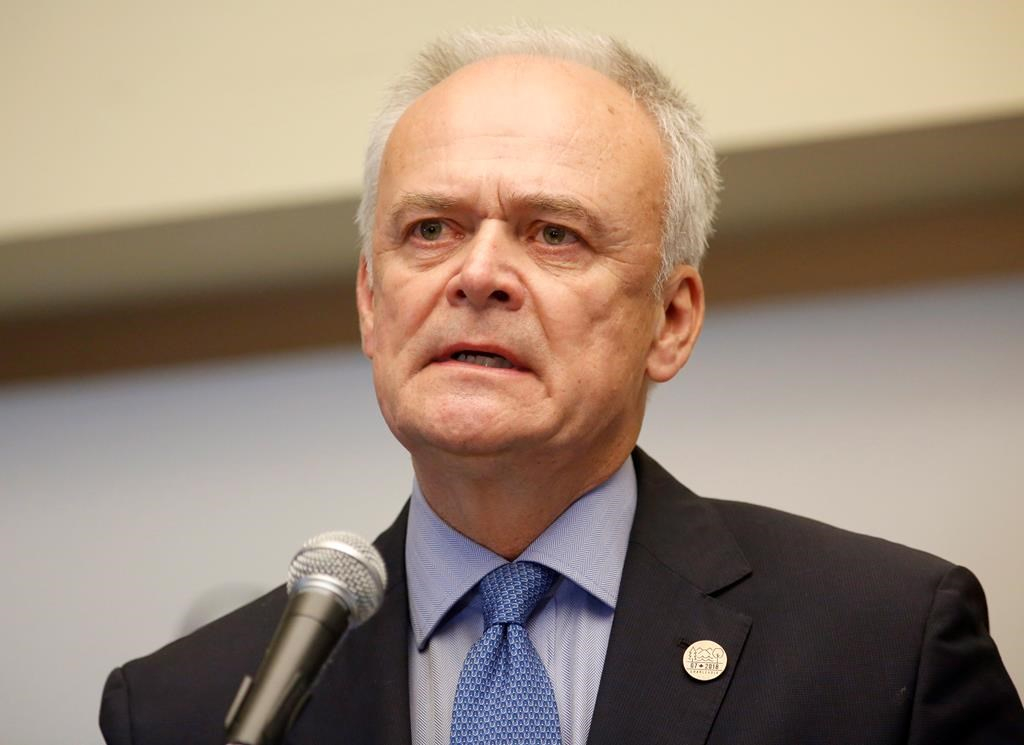 Peter Boehm, Deputy Minister for the G7 Summit and personal representative of the Prime Minister, speaks at a Canadian International Council event in Ottawa on Thursday, May 10, 2018. File photo by The Canadian Press/Patrick Doyle
Previous story
Next story

Less than a month before Donald Trump sets foot on Canadian soil for the G7, Justin Trudeau's chief summit organizer is being forced to defend the viability of the G7 itself.

Trump's potential to disrupt the summit — an international meeting in which the prime minister has invested significant political capital — is growing larger by the day as his June 8 arrival date in La Malbaie, Que., creeps closer.

Trudeau and his fellow summiteers from Britain, France, Germany and the European Union have already expressed their regrets over Trump's decision this past week to withdraw the United States from the Iran nuclear agreement.

Trump was already a G7 outlier on trade and climate change. But now there's growing concern that the group itself could fatally fracture, with the U.S. splintering off. The ambassadors from several G7 countries to Canada were forced to address that recently.

Peter Boehm, Canada's G7 sherpa, was also confronted with the issue this past week during an unusually tough question-and-answer session at a gathering in Ottawa.

"Are we into a six-plus-one dynamic?" asked Sandelle Scrimshaw, a former foreign service colleague of Boehm's during a keynote dinner appearance of the Canadian International Council in Ottawa.

The 63-year-old career diplomat offered a careful, measured reply, but he left open the possibility that the G7, which runs on a consensus basis, simply wouldn't be able to reach one next month.

"If leaders were to agree on everything, there wouldn't be a point in having these meetings," said Boehm.

"You try to work out the consensus, and if there isn't a consensus there, it's clear that you state the obvious … that we don't have unanimity on a particular issue."

"For us, in Canada, the global trade file is of primordial importance." #G7 #Cdnpoli #CanadaFP

That would mark a repeat of Trump's disruptive debut at last year's G7 in Italy — his first foray onto the world of multilateral diplomacy. There was no common ground to be found on climate change.

The leaders' 2017 final communique was accompanied by a footnote that said the U.S. would not join the other G7 countries in reaffirming their commitment to the Paris climate agreement, which Trump also abandoned.

Boehm said there has been careful planning and consulting among his fellow G7 sherpas to ensure a smoother, more successful outcome this time.

"The sherpas are in contact all the time. I have a very good relationship with all of them and we have each other's backs because we're in this together."

Disagreements among leaders are nothing new, Boehm explained.

In fact, the format for their talks will encourage that. They'll sit alone at a round table and face off with their sherpas sitting behind to take notes and offer advice.

Having new leaders in the room only increases the possibility for disagreement, he added.

"Last year, there were four new leaders at the table. In my experience, I've seen that leaders will come in, they will be a little bit skeptical because they have not done this before and ultimately they see some value in having a frank discussion."

Canada's frank talk will centre on one important theme, Boehm said: the fact that the country needs the international rules-based system to succeed despite the threats it may face.

At the heart of the agenda that Boehm and his fellow sherpas are carefully crafting is how to widen the benefits of the global economy to reach more people — especially those who feel left out and are feeling a pull towards populist anger.

"Related to that, of course, is our need to work together, and by that I really mean work together to strengthen the rules-based trading system, and encourage free and fair trade. For us, in Canada, the global trade file is of primordial importance."

When the leaders take their places at their round meeting table, they will negotiate — but not in the winner-take-all, 'Art of the Deal' bare-knuckle bartering style that has been associated with Trump.

"In order to negotiate effectively, you have to give something up. It's identifying that bit that you can give up — that little bit of sovereignty that you might lose, and realize that it is for the greater good and for unanimity," said Boehm.

"We all chip away at that."

It seems The Donald is a

It seems The Donald is a catastrophe waiting to happen. His "America First" mantra appears to limit his ability to negotiate in a reasonable manner. His totalitarian leanings, already being set on a national level in the US, are being moved more and more firmly onto the international stage.
How will people be able to develop any international consensus in this context?

Trudeau is spending $607 MILLION dollars so the G7 can swing by and talk about sustainable capitalism?? From a government forcing P3s, corporate welfare, ignoring snow washing and tax fraud, gutting environmental protections, borrowing from corporate banks instead of the BOC, foreign property ownership, rip strip and ship industry destroying once pristine habitats, damming rivers, tarsands, plastic crap by shiploads from China, 80+% food imported, tax $ to car builders over mass transit, to name a few. How about leading by example and videoconferencing rather than sending plane loads of people thousands of miles for a few days of meetings? The footprint for government travel should be public, with reduction targets and independent enviro groups monitoring progress. Spending $607 million on habitat restoration/protection could save some species from extinction. Human overpopulation is the root of these problems and targets for reducing growth must be included in these agreements. IUDs today save people from starvation in future.

Let me see..."Rules based trading system..." Would that be so called free trade deals with investor state dispute settlement where three trade lawyers sit in a room and supposedly use a law based impartial approach to resolve conflicts. Corporations can and do sue Canada for lost expected profits if Canada passes measures, in the public interest to preserve the environment or to safeguard the health of Canadians. This process is extrajudicial superseding even our legal system and parliament. It is secretive. We do not know what witnesses were called to give evidence, whether only the proponents witnesses were heard or indeed whether the lawyers sitting on the ISDS panel are not in conflict of interest....lawyers for ISDS one day and clients the next. Canada has paid out about $219 million to U.S. companies suing Canada. The U.S. has not lost a single case!Cases where these trade lawyers ruled against Canada give foreign investors special rights but no responsibilities. Sovereign regulatory authority is seriously jeopardized. Does Trudeau like ISDS so Canadians mining companies can successfully sue smaller countries trying to protect their environment....so the Canadian tax payer pays the piper when we are so successfully sued so Canadian mining companies can win ISDS millions suing countries like Romania.