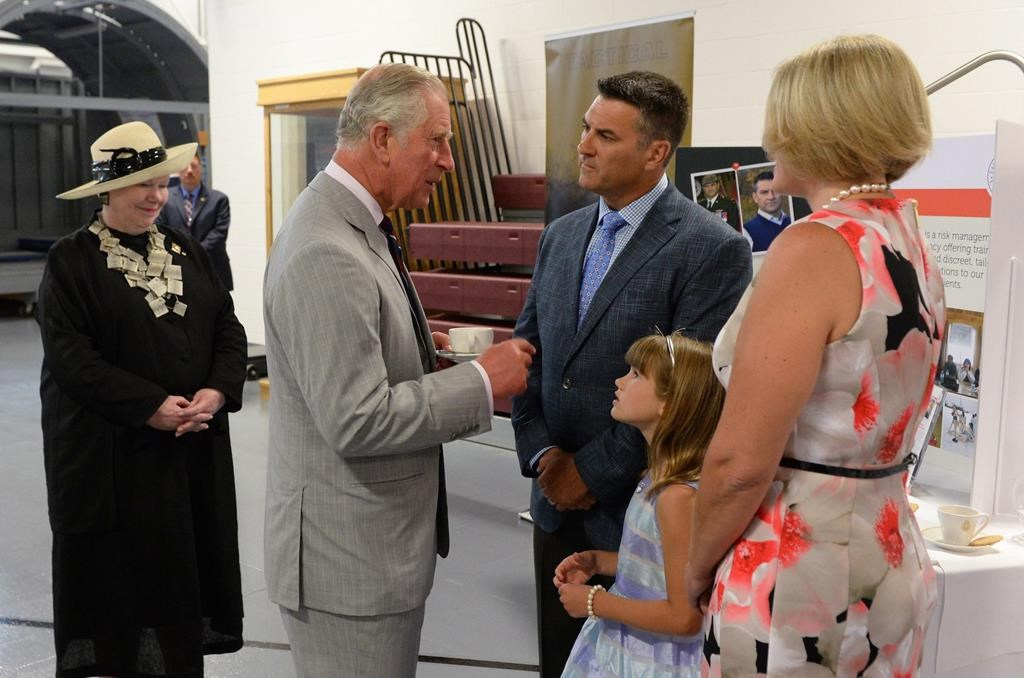 Nicola Day's flight to London will land just hours before Prince Harry is set to wed Meghan Markle in a lavish ceremony at Windsor Castle, and she's determined to not let jet lag stand in the way of royal revelry.

The Kingston, Ont., resident expects to spend the first hours of her vacation searching for a place to watch Saturday's noon-hour spectacle with other fans of the couple.

"We'll make an effort to find somewhere to watch it and be among the people," Day says of plans she's making for herself and her husband.

"They really are historical events, these weddings are a big deal around the whole world.... I'm all for celebrating this wedding."

The Days are scheduled to arrive just in time to soak in what's sure to be an explosion of patriotic fervour for the people's prince and his California-born actress fiancee.

But the main reason they're heading to the United Kingdom is for a separate royal event altogether — a garden party at Buckingham Palace to celebrate the work of The Prince's Charities, which supports the philanthropy of Prince Charles.

Steve Day scored an invitation as a graduate of an entrepreneur program run by the group's Canadian chapter. The national program helps Canadian Armed Forces members transition to civilian life by offering education and resources to launch their own business.

Day is one of three Canadian graduates invited to the garden party May 22, which will also mark the 70th birthday year of the Prince of Wales. The prince's actual birthday is Nov. 14.

"It's all in the private portion of Buckingham Palace that the public can't get access to, so that's why it's kind of neat," he says, musing on the possibility of other royals showing up.

"It is a garden party for Charles' 70th birthday so I'd be very surprised if the entire royal family wasn't there."

Word is that the newlyweds themselves may attend — Prince Harry and Meghan Markle have reportedly chosen the celebration as their first official event as a married couple.

Steve Day says he's a fan of the younger prince, who has focused much of his charity work on wounded veterans through his passion project, the Invictus Games.

"I feel an affinity with Prince Harry as a retired vet who's fought in Afghanistan. I like what he's doing to support veterans," says Day, who spent more than a year of cumulative duty in Afghanistan on multiple occasions between 2003 and 2011.

Before Tuesday's garden party, there are preparations to be made.

"Let me tell you, it's hard to find a nice hat in Kingston," she says.

"My friend said: 'You should go to Ottawa or Toronto and look for a hat.' So I may just have to look when we actually get to London and I'll probably spend a fortune. But I may just have to do it because it is a once-in-a-lifetime opportunity."

Nicola Day says the garden party will include high tea and a formal parade, in which the Prince of Wales and the Duchess of Cornwall will move through the guests.

As for the rest of their week-long trip, the couple hopes to hit as many tourist hotspots as possible: Big Ben, the London Eye, Westminster Abbey and the site of the wedding, Windsor Castle, about 80 minutes from London by car.

The town of Windsor has said it expects 100,000 visitors to head there to see the newlyweds travel in procession after the ceremony.

Travel experts expect the number of visitors to the U.K. will increase after the wedding, but some agents reported already seeing a spike in interest because of the nuptials, according to an informal survey by the travel group TLNetwork.ca.

Meanwhile, a spokeswoman for the travel fare aggregator Expedia.ca says it's seen a 175-per-cent increase year-over-year in flight search data for travel to London over the wedding weekend.

Canadians appear to be among those searching for deals.

Charles Purdue Pulido of Strawberry Tours in London said he's seen an increase in Canadian bookings for his agency, which offers tours including one focused on various monarchs throughout history. He says they've added a special early morning tour Saturday that will pass through the city's royal landmarks and conclude with a screening of the wedding at a pub in central London.

Visiting professor Christabelle Sethna says she'll likely catch the festivities on television like most of the world, even though she happens to be in the U.K. for academic work until the end of May.

In contrast, Sethna finds her British friends and work colleagues rather disinterested in the whole affair.

"I'm the most enthusiastic for many reasons," says Sethna, a professor in the Institute of Feminist and Gender Studies at the University of Ottawa.

And as a former Torontonian, Sethna says she feels "strangely connected" to Markle, who detailed her favourite Hogtown haunts and hobbies on social media while shooting her seven-season run on the TV series "Suits."

"The fact that Meghan Markle ... went to yoga classes and she went to juice bars and she had a big pack of girlfriends, I think many, many women can identify with her Toronto lifestyle," says Sethna, who used to live in the same neighbourhood linked to Markle.

"Of course, Toronto wants to feel that it's at the centre of everything, and being from Toronto I completely understand that feeling.... It got to be the host for this relationship and I think that's wonderful. This is another feather in Toronto's cap."