Returning otters to undersea world failing in their absence 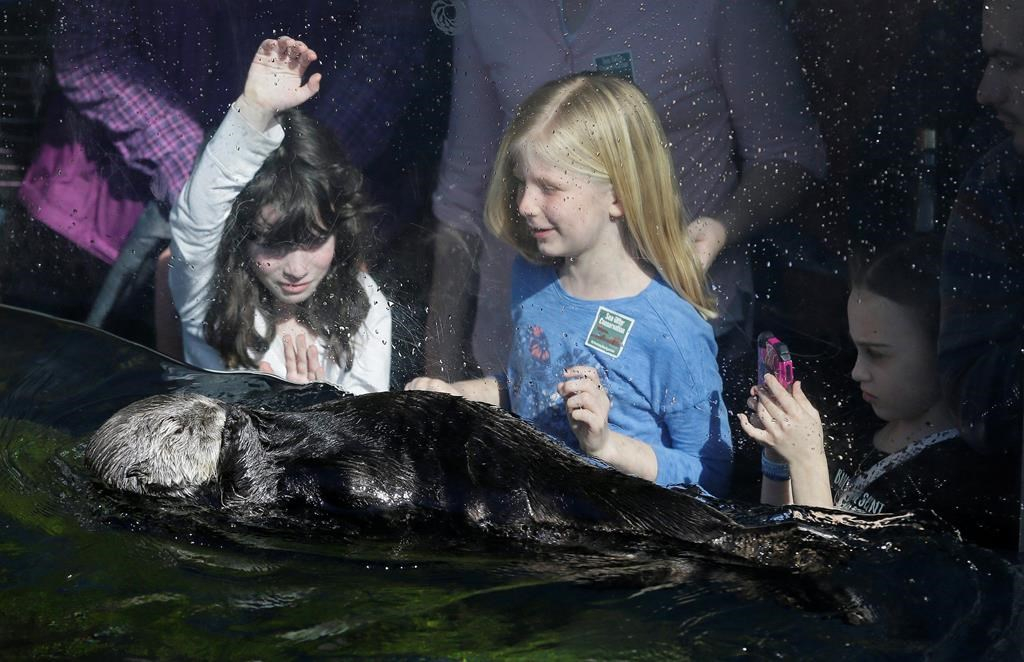 In this photo taken on Monday, March 26, 2018, three girls watch a sea otter pass by during its afternoon feeding at the Monterey Bay Aquarium in Monterey, Calif. File photo by The Associated Press/Eric Risberg
Previous story

While threatened southern sea otters bob and sun in the gentle waves of this central California estuary, wildlife experts up and down the West Coast are struggling to figure out how to restore the crucial coastal predator to an undersea world that's falling apart in their absence.

Southern sea otters, nearly wiped out by centuries of industrial-scale hunting for their fur pelts, have rebounded from as few as 50 survivors in the 1930s to more than 3,000 today, thanks to federal and state protection.

But there's a problem. Southern sea otters, a top carnivore that normally helps keep other populations in check and ecosystems in balance, "are kind of stuck," says Teri Nicholson, a senior research biologist at the nearby Monterey Bay Aquarium

Despite decades of government protection, southern sea otters today still occupy only about a fourth of their historic range. Federal wildlife policy calls for waiting for the otters to spread out again on their own. The otters' habitat hasn't really budged beyond their current central California enclave, however, over the past 20 years.

"At this point, I think for the population to increase, the range needs to expand," said Karl Mayer, manager of the aquarium's sea-otter program. It doesn't really make sense, Mayer said, "to stuff more otters into a limited environment." .

At the former whaling town of Moss Landing, the restored slough forms part of the southern sea otters' modern-day range: 300 miles of coast along the middle of California.

On this morning, male sea otters clasp paws with one another for stability in the water as they snooze together and warm their bellies in the spring sun. Deeper into the waterway, female otters float with their young perched on their chests, or with newborn otters — even more buoyant than adults thanks to their thick fur — bobbing alongside them like corks.

Though small by marine mammal standards, sea otters are the largest members of the weasel family and males can grow to nearly 100 pounds (45 kilograms). Their fur, the densest on earth, keeps them warm.

Efforts to get the southern sea otters back into more of their old range reflect growing global recognition of the benefits of restoring top predators to their historic territory.

After supporting wolf extermination in Yellowstone in the first half of the 20th century, for example, the U.S. government by the second half was aiding wolves' reintroduction to the national park. The wolves' hunting have cut what were too-large herds of deer and elk. The result has been a rebound at Yellowstone for all kinds of life — beavers, fish, even aspen trees, some ecologists say.

Wildlife officials have made efforts around the world to restore predators ranging from birds of prey to bears, sometimes controversially when people believe the animals are a threat to them or their livelihoods.

Some in the fishing industry oppose the sea otter's comeback. Fishermen in Alaska accuse the growing northern otter populations there of consuming the red sea urchin humans eat as sushi. Wildlife experts counter that the entire coastal ecosystem, including the valuable shellfish, faces collapse without otters and other predators to keep things in balance.

Even when humans support the restoration of a predator, it isn't easy.

Sometimes, "it's the Humpty-Dumpty syndrome," said Bill Ripple, an Oregon State University ecologist and professor who has found that only half of efforts to restore land carnivores are successful.

"During these cascading events that follow the loss of the predators in the first place, we can sometimes see the ecosystem fail to function," Ripple said. "And sometimes it's not real easy to put those ecosystems back together."

When it comes to southern sea otters, all but wiped out long ago, "we don't even know what a normal environment looks like," said Lilian Carswell, who co-ordinates marine conservation and sea-otter recovery at the U.S. Fish and Wildlife Service.

Populations of voracious purple sea urchins have exploded along the West Coast, owing to the more than century-long absence of the sea otter from much of its old range, and to a mysterious die-off this decade among sea stars, another coastal predator.

Their numbers unchecked, purple urchins have helped destroy more than 90 per cent of Northern California bull-kelp forest since 2014, said Cynthia Catton, an environmental scientist with the California Department of Fish and Wildlife.

When otters venture into the undersea areas eaten bare by urchin, they are easily spotted by one of their main predators, the great white shark.

The sea otters, unique among marine mammals, are more fur than blubber, so sharks typically only take a test bite and move on. But the otters often die anyway.

In areas with kelp cover for the otters, shark bites drop to almost nothing, Nicholson and aquarium colleagues found in a March report in the journal Ecography.

To help the kelp, commercial divers along Northern California's Mendocino coast are tending a precious stand of kelp forest, plucking off the purple sea urchins by hand and using suction hoses to vacuum them up, says Catton.

Unlike red urchins, the spiny purple urchins are no one's idea of a favourite meal, whether human or otter. Experts are trying potential commercial uses for them, including compost, in hopes of incentivizing their large-scale removal.

And at Monterey Bay Aquarium, where workers since 1984 have rescued and returned to the wild about 280 stranded otters, otter-tenders are trying to habituate rescued young ones to seeking out purple sea urchins over crabs and other more appetizing fare.

Ultimately, California otter experts may one day recommend simply loading otters into vehicles and giving them rides to remaining kelp forests to repopulate.

Meantime, scientists scratch their heads over what else to try.

West Coast creatures had millions of years to evolve their interdependent lives, Carswell said. The last few centuries of human development were enough to pull apart that network of otter, kelp, urchin, shark, and other species.

"In some ways, we're in an age of restoration," she said. "In the marine environment especially, I feel like we have an emphasis and chance at restoration, and a chance to turn things around."