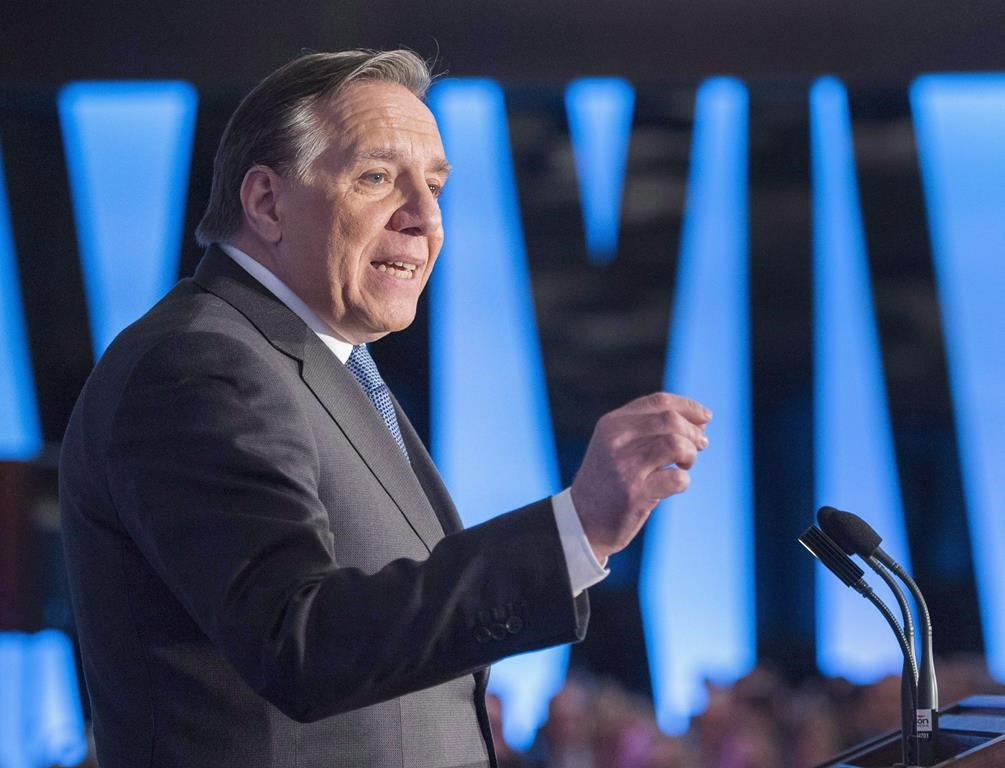 Less than five months before Quebec's provincial elections, and just a few months after mulling over the idea of a Quebec values test and language quiz for immigrants, the CAQ's controversial "orientation document" — spelling out its plans to force newcomers to assimilate — was leaked to the public.

The paper says that if brought into power in October, the party won’t expel immigrants if they fail to successfully integrate – it will simply flag them and urge Canada to do it on Quebec's behalf. I’m not sure whether urge in this context means nudge, firmly suggest, or send a strongly worded letter, but I do know opportunistic vote-pandering when I see it.

Under the proposed immigration plan, immigrants to Quebec would receive a temporary three-year permit, referred to as a certificat d'accompagnement transitoire (CAT), and be tested on certain criteria such as knowledge of the French language before they can apply for Canadian residency.

New arrivals who don't pass the test within four years would not receive a Quebec selection certificate, authorization to apply and would be flagged at the federal level for possible relocation or expulsion.

"If the person does not want to learn French, they will not have their selection certificate, so they will never be a citizen," party leader François Legault told Radio-Canada earlier this week. "They become a person without status and it's up to the federal government to decide what to do with that person."

Aside from the descriptive language quoted, which evokes imagery of some hapless immigrant forced to wander from province to province to escape from Legault’s French test, the CAQ’s plan is essentially a serving of pandering with a side order of scapegoating. Not only is it basically unenforceable, and most likely illegal, the Quebec government also has no power to actually expel immigrants from the province.

It insults Quebecers’ intelligence by pretending to take action to rectify a so-called problem, while essentially passing the buck on to the federal government, which would likely do absolutely nothing about it, as Canada’s extensive immigration laws don’t require the CAQ’s proposed test. The entire proposal is a glorified moot point meant to portray the CAQ as a defender of Quebec values and tough on the “others."

Under the current immigration system, Quebec has significant decision-making power over who it takes in (prioritizing the French language), but it’s still Canada’s decision to determine who becomes a Canadian citizen or who ends up with resident status.

But don’t take my non-immigration-lawyer word for it — after the findings became public this week, a number of immigration legal experts interviewed by media confirmed that the CAQ’s plan was not only inapplicable, but demonstrated a complete lack of knowledge of the immigration system as it currently operates. That’s reassuring to know coming from the political party currently leading in the polls.

Premier Philippe Couillard immediately responded to the plan, calling it impracticable and pointing out that it considers immigrants as “problems that need solving.”

Doubling down on scapegoating

That’s my biggest issue with it — I’m less concerned with a proposed immigration policy that ultimately relies on the federal government doing the CAQ's dirty work than the message it communicates. And that message is heard loud and clear: immigrants are an irksome problem that need to be dealt with. Immigrants are not carrying their weight. Immigrants should concern us. Immigrants should be driving us to the polls, because our way of life and our future is threatened.

Newly-arrived immigrants are leaving Quebec in droves. The CAQ would have you believe that's because they’re not living up to their part of the bargain to integrate. God forbid it should occur to anyone at the CAQ that maybe, just maybe, immigrants are leaving because Quebec may not be living up to its side of the bargain to properly welcome them.

It’s not like multiple studies don’t already exist that highlight inadequate funding for immigrant integration, utilization of their skills, or the discrimination so many of them face while looking for work here. Could it be that the problem is multifaceted, and perhaps the solution should be as well?

As a second-generation immigrant myself, there is something so exhausting about seeing a political party, once again, doubling down immigrant scapegoating with a ridiculous proposal that attempts to garner support from voters who consider immigration a threat to their culture and language, instead of tackling the real issues.

It’s doubly aggravating in the context of a new Conference Board of Canada report that states that if immigration were slashed, Canada’s economy would feel the effects immediately — and not in a positive way.

Immigrants aren't nearly the problem the CAQ presents them to be either: “Immigrant families fare well in relation to Canadian-born families in important economic metrics such as household income and homeownership — not to mention other benefits of family reunification, such as boosting immigrant retention rates, which is especially key to economic growth in Atlantic Canada,” says the report.

The report also makes it clear that weak population growth makes it more difficult for governments to fund vital social services — especially as a population ages and requires more costly services such as health care. "The same would occur across Canada if immigration was cut to zero, as a smaller tax base would pressure governments across Canada to make tough decisions, such as cutting social services in small and rural communities where it would become difficult to justify making social investments in the wake of population decline," it says.

And while immigration opponents tend to focus on the challenges many newcomers face in integrating, immigrants as a whole are actually better educated than Canadians. Since 1967, when the government introduced its point system, the selection process favours those with marketable skills.

Contrary to what the CAQ and other like-minded groups may think, the selection criteria already ensure that entering and immigrating to the country isn't a walk in the park.

A similar analysis specifically looking at immigration for Quebec and conducted by Radio-Canada’s Gérald Fillion reaches similar conclusions to the Conference Board’s report at a provincial level. Reducing the number of immigrants in the province would have serious repercussions for Quebec’s economy, as a result of an aging population, a stagnating population, and the need for more people to fill current jobs.

According to The Canadian Press, which cited government data, since 2014, Quebec's workforce has shrunk by 5,000 workers per year. That loss has left businesses turning down contracts, downsizing investments and slashing shifts.

Immigrants aren’t coming to steal our jobs. They’re coming to fill jobs that need filling and creating more of them in the process.

And yet, despite concrete proof that immigration is not only desirable, but essential for the country’s economic prosperity, populist politicians — in Quebec and elsewhere — insist on treating immigrants as problematic and unworthy of citizenship; people who must be scrutinized, and ruthlessly tossed back in the unwanted pile if they fail to meet stringent criteria for acceptability.

To them, immigration is a necessary evil — a deal one must make with the devil because birth rates are low and the older folks are only getting older.

Are there challenges with the current immigration system? Absolutely. Could the system be improved, and more money funnelled into ensuring immigrants are better integrated? Without a doubt. Could French lessons be more easily accessible? You bet!

But the solution to this complex reality and the multidimensional issues immigrants face here isn't to tarnish all new arrivals and force them to prove they're putting in more work than anyone else. Immigrants have vastly different dreams, skills and abilities to adapt to change. Their capacity or success in learning French cannot be assessed as easily as the CAQ assumes.

Spend a little time talking to immigrants and you will quickly understand there is no language test or immigration quiz that can adequately and accurately gauge someone's successful integration in a new country, and whose results can be used as a legitimate reason to expel someone.

All this immigration policy does is unfairly treat new immigrants as a potential threat to Quebec's survival, when, in fact, they are absolutely essential to it. The sooner we acknowledge that, the sooner we can focus on real solutions.

The CAQ’s ‘values test’ is unclear and unenforceable vote pandering

It's good to read articles

It's good to read articles such as this which point to the moral bankruptcy of political campaigns where winning at all costs is the only game and people are either dupes or reptiles. Such attitudes, dominating politics and business, are the problem and a cause for despair.