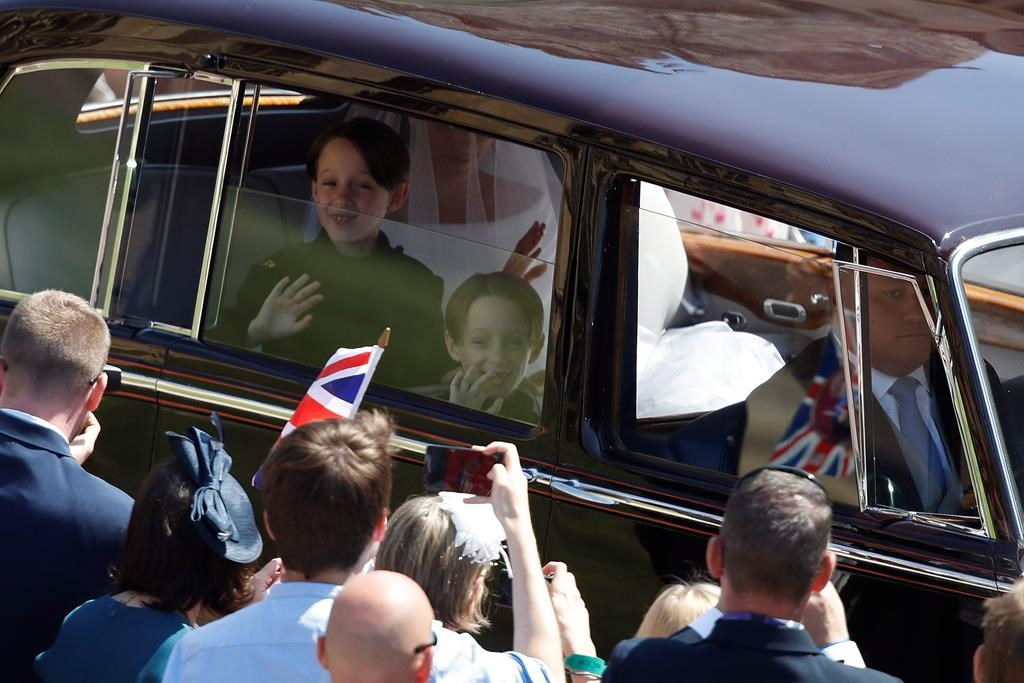 Page boys John and Brian Mulroney accompany Meghan Markle as she arrives for her wedding ceremony at St. George's Chapel in Windsor Castle in Windsor, near London, England, on Saturday, May 19, 2018. Photo by The Associated Press/Odd Anderson
Previous story
Next story

The joyful expressions of seven-year-old Canadian twins Brian and John Mulroney captured Internet hearts on Saturday as the boys took a star turn as page boys at the royal wedding.

A photo of one the gap-toothed boys grinning widely as he carried Meghan Markle's veil into St. George's Chapel became an instant online sensation, and was quickly dubbed "photobomb of the royal wedding" by several media outlets.

Royal wedding watchers immediately began posting photos of the twins on social media, with many commenting that their excited expressions had captured the mood of the day.

"He is ALL OF US," Twitter user Kimberly Eaton wrote in a typical reaction.

"Me too, kid," another wrote simply in response to another grinning photo of a twin.

The Mulroney kids played a central role in the wedding, including arriving to the ceremony with the bride.

Wearing long black suit jackets and pants with a red stripe, they each carried a corner of Markle's long veil as she made her way up the chapel steps.

Their four-year-old sister Ivy also served in the wedding party as a bridesmaid.

The three kids were present with parents Ben and Jessica Mulroney, who live in Toronto are said to be close friends of the royal bride and groom.

Jessica, a stylist and brand strategist, and Ben, who is co-host of CTV's "Your Morning" and anchor at "Etalk," were given prime seats near the front of the chapel.

A total of six young bridesmaids and four page boys made up the wedding party for the Windsor Castle ceremony.

The others included Princess Charlotte, who is the three-year-old daughter of Prince William and the Duchess of Cambridge, and their four-year-old son, Prince George.

Jessica Mulroney is known for putting a spotlight on Canadian designers. At the wedding, she wore a blue fit-and-flare dress with capped sleeves from Montreal-based Di Carlo Couture.

I was surprised to find this

I was surprised to find this article on the Canadian children of an entertainment TV host and a stylist participating in a royal wedding. I was pleased to see that you did not have any other articles on the royal wedding, which can easily be found in many other publications - eg. entertainment media. I just want to let you know that I am not interested in this sort of “entertainment“ news - which I don’t really consider worthy of your usual high standards.