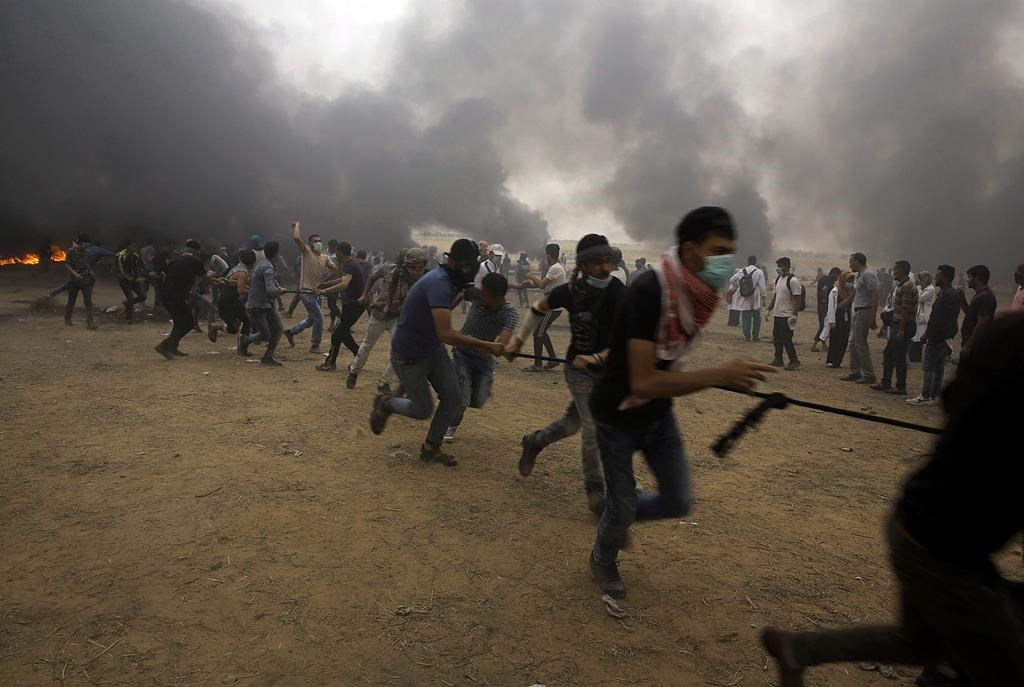 Palestinian protesters pull out the fence of the border after they burnt tires during a protest at the Gaza Strip's border with Israel, east of Khan Younis, on Friday, May 4, 2018. File photo by The Associated Press/Adel Hana
Previous story
Next story

When Genevieve Boutin and her colleagues at the United Nations Children's Fund were finished verifying the aftermath of last week's carnage at the Gaza-Israel fence, they added seven more to their tally of dead children.

That included a statistical first — a girl — the first female killed among the 13 children shot since protests erupted at the fence on March 30, a burning fuse that exploded Monday into the bloodiest day between Gaza and Israel in four years.

They are among the 59 Palestinians shot by Israeli forces, a total that includes a Canadian doctor trying to help the wounded. A Hamas official has since said that 50 of those were from their militant group.

That Hamas number that has been seized on by Israel, and their Canadian supporters, to fire back politically at several world leaders — including Prime Minister Justin Trudeau — for implying in their calls for an independent investigation of the incident that the Israeli military may have used excessive force.

At least one Canadian Jewish group says Hamas is using Palestinians as human shields and that the Trudeau government should be standing in firm solidarity with Israel's right to self-defence.

For Boutin, a Quebec City native who is UNICEF's special representative in the West Bank and Gaza, the politics and statistics graze the surface of a burning question that she has tried to answer in numerous conversations with injured children and their grieving families: what draws you to that dangerous fence?

The answers she's getting can't be measured solely by rhetoric or numbers: "They exemplify the human drama that is taking place in Gaza."

In the first few weeks, many kids told her that "life is boring here, nothing ever happens" so they were curious about the growing fuss over their fence.

"As the weeks wore on, more and more kids obviously know the risks as they go," said Boutin. "There's a number of kids who say, 'there's nothing I have to lose, I don't see a future for myself and I'm showing the world our situation has to change so I am participating in it'."

In addition to the fatalities, more than 1,000 Palestinian children have also been wounded by live fire since March 30, said Boutin, 43.

"Many of them are serious injuries that could lead to amputations and certainly handicaps for life. Just that, in and of itself, is horrific in terms of the impact on children."

She recalled consoling the father of a 10-year-old boy who was shot in the early days of the protests several weeks ago. The boy was hit by a bullet after running off. The father still has his son, but is tormented with regret.

Two other older teenagers who were killed defied the stereotype of the bored, vulnerable youth who become easy prey for militants — both were about to take the equivalent of their final high school exams.

"That means some of these kids were engaged still in the education system," said Boutin.

International law makes a simple point, she said: "a child is a child" and they shouldn't be targeted by anyone — whether they were coerced into a dangerous situation or not.

Still, UNICEF and others are trying to keep them away from the fence.

"We've been advocating with community leaders and parents to try to say it would be good to discourage children from being there on the front lines. But we also are mindful that the right to peacefully protest is a right that children have."

Smoke from burning tires and the periodic crackle of gunfire returned Friday to the Gaza fence as the rallies resumed for the first time since Monday. Hamas, which took over Gaza in 2007, says they will continue until the blockade that Israel and Egypt has imposed is lifted.

Israel is accusing Hamas of using the protests to carry out attacks and says it has to protect its border.

But the condemnation of the international community against Israel is growing.

The UN Human Rights Council said Friday it will set up a commission of inquiry into the Gaza border violence, something Israel rejects as the product of "a built-in anti-Israel majority, guided by hypocrisy and absurdity."

Part of Boutin's job is to independently verify casualties and to ensure that emergency supplies, especially medical aid, reach those who need it most.

The ripple effect of the increased violence has been crushing on a Palestinian medical system that was already under massive strain.

Boutin sees hope fading in the faces of the local medical staff.

"They were so devastated after the events of Monday. They keep doing their work. They're very admirable, but it's very hard for them to understand what's happening ... the international community — in their eyes — is not reacting as they would like it to react."

Boutin said she didn't personally know Dr. Tarek Loubani, the Canadian citizen who was shot in both legs Monday while treating the wounded at the fence even though he and his team wore high-visibility jackets that identified them as medical staff.

Trudeau said he was appalled by that shooting and called for an investigation.

An Israeli embassy spokesman in Ottawa said Israel has asked Canada to help with information to assist the Israeli Defence Forces investigation of the incident.

B'nai Brith Canada says Trudeau must apologize to Israel for not acknowledging the responsibility of Hamas. On Friday, the organization also released a statement that "suggests that a Gazan paramedic slain after assisting Canadian doctor Tarek Loubani was a member of the Hamas terrorist group and employed by its Interior Ministry."

Another group, Independent Jewish Voices, accused some Canadian Jewish organizations of acting as "little more than PR for the Israeli government."

Boutin had no comment on the political fallout of Monday's events, including the response by her own government in Ottawa.

Her main message is simple: it's just as wrong to shoot doctors, as children.

"Not only is it a last recourse to shoot at peaceful protesters, but there are certain categories that should be specifically protected."

Encouraged by an American

Encouraged by an American president the Israeli government sees an opportunity to increase both the intensity and the criminality of its war against Palestinians. That means shooting children, and clearly demarcated aid workers, is going to be an increasing part of their tactics.

They are ramping up.

Meanwhile, life in Gaza and the West Bank becomes daily more intolerable. What is the water situation in the occupied territories? I heard recently, that a significant percentage of it was not longer safe to drink.

Canadian silence has been shameful; Israel supporters who attack Trudeau for his recent action are telling us that human life, children, international law, and any recognition of Palestinians right to their land, are all irrelevant. Israel can do whatever it wants, even if what it wants is the genocide of the indigenous people of that land.
How do we evaluate that level of partisanship?